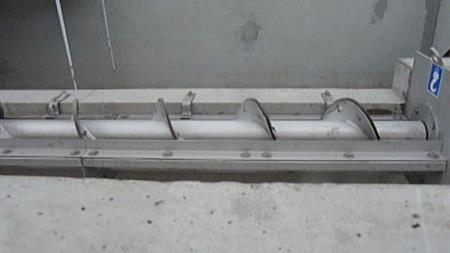 Costain and Galliford Try Building were part of a consortium appointed by United Utilities to upgrade the Tarporley wastewater treatment works in Cheshire. On 5 March 2015 MEICA (mechanical, electrical, instrumentation control and automation) site manager Peter Rowan and a software engineer were commissioning a storm screen -- a machine comprising a 3.1 m-long screw conveyor mounted horizontally inside an overflow chamber with a mesh basket attached to the underside -- to remove solid objects from liquid sewage.

Rowan was standing inside the chamber when the machine automatically started without warning. The auger turned a quarter of a rotation, pulling Rowan's foot through the mechanism and into the gap between the screw and the mesh basket. The accident caused him to have three toes amputated.

Costain and Galliford Try Building, which both reported turnovers of more than £1bn in 2017, pleaded not guilty but were found guilty of breaching s 3(1) of the Health and Safety at Work Act. They were fined a total of £2.8m and ordered to cover costs of £101,462.

Health and Safety Executive inspector David Argument said: "These two businesses turn over approximately £50m every two weeks so they are much larger than the 'large organisation category' set out in the [sentencing] guidelines."

Liverpool Crown Court was told that Rowan was a limited company in his own right and was hired by an employment agency to work on the upgrade. The specialist contractor that had supplied the auger was supposed to have commissioned it.

However, Argument told IOSH Magazine that the contractor "had been paid to commission the machine but was never called to the site, so the MEICA site manager ended up doing it himself".

He said before the accident Rowan had expressed concern that a commissioning engineer was not there to carry out the job and that staffing generally was low.

"There was no safe system of work," Argument said. "[Rowan] was undertaking the task based on his experience and intuition. He had not commissioned a screw like this before and the court found that he was working without access to the information that the specialist contractor had."

A Costain spokesperson said: "We strive to ensure that everyone goes home safely each day and are very sorry when that does not happen and we experience an accident such as this. While we have stringent safety procedures, something clearly went wrong which resulted in the accident involving Peter Rowen. We deeply regret this [...] We are continually improving our safety procedures and respect the sentencing from the court."

A spokesperson for Galliford Try said: "Our first priority as a business is to ensure that everyone goes home safely at the end of each day. We have rigorous health and safety procedures and policies in place that are constantly being reviewed, and it is regrettable when any accident or incident occurs."