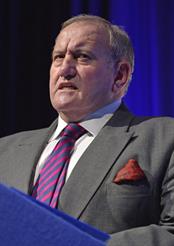 Keith Crawford, 73, was sentenced to two-and-a-half years in prison for gross negligence manslaughter and a breach of safety and health regulations. He has also been ordered to pay £15,000 costs.

Labourer Peter Clements, 48, and his son were installing a soakaway for Crawford's leaking outdoor swimming pool when the 2.7 m trench collapsed on 15 January 2015.

He was taken to hospital with a collapsed lung and crush injuries but died from cardiac arrest three days later.

Crawford, a former UK Independence Party parliamentary candidate, was accused of refusing to buy a trench box for the workers to safely carry out the job because it was too expensive.

During the trial earlier this year Exeter Crown Court heard that he told workers to "carry on with what you are doing" after they had requested measures be put in place to make the trench stable.

Prosecutor Stephen Mooney said: "Mr Phillips' perception was that this work needed to be done quickly and cheaply but not safely. He was completely ambivalent to the use of safety measures and so he walked away."

Passing sentence at Bristol Crown Court on 22 March, Mr Justice Dingemans said: "As a result of the completely inadequate steps of the defendant to safeguard [Clements'] safety the hole collapsed completely burying him.

"A particularly sad feature of this case is that Ryan Clements saw his father buried. I am sure there was plain and obvious risk of death from the collapse of the side of the trench."

Crawford's legal representative, Richard Smith, said the incident was "out of character with the way he would normally do his work, which was usually of a high standard".