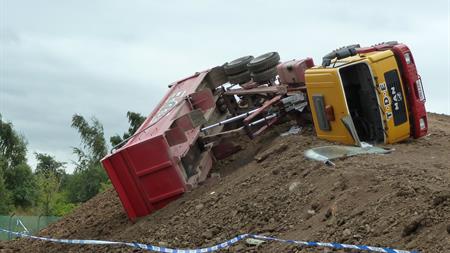 A tipper wagon driver was seriously injured on 17 September 2013 when his wagon overturned while he was tipping spoil onto a stockpile at the Former Croda Works in Kilnhurst, South Yorkshire. He died a week later on 24 September of his injuries.

A Health and Safety Executive (HSE) investigation found that Sirius Remediation contractors were managing the works, which involved raising the ground levels on site by reusing spoil from other sites, instead of sending it to landfill.

The driver reversed up the stockpile's slope and raised his tipper. However, the truck toppled sideways and the driver sustained fatal chest injuries.

The investigation found that the contractor had failed to demarcate the sides or the top of the slope. It should have installed beams or barriers at the edges to prevent plant or other vehicles operating close to high and loose edges. Sirius Remediation had failed to carry out a suitable and sufficient risk assessment for the safe formation of the stockpile.

The Former Croda Works is a 11.5-hectare site which has a varied historical legacy, including being home to a bitumen processing plant, a tar distillery and an ironworks and forge. The remediated site will be developed to provide 381 new homes and community facilities.

HSE inspector Medani Close said: "Stockpiling should only take place under the control of a suitably qualified temporary works manager or co-ordinator as it can be a high-risk activity if not properly managed.

"Where stockpiling is unavoidable, tipping should take place on a firm, level surface, preferably at the base. Plants such as a crawler dozer, tracked/loading shovel or excavator should be used to create and maintain the stockpile and its edges should be clearly demarcated with barriers."