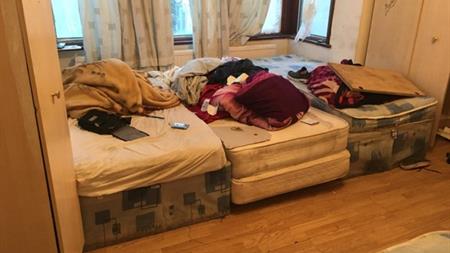 The trio, who were all brothers, were sentenced at Blackfriars Crown Court after being found guilty following an eight-week trial.
The court was told that, between July 2015 and October 2018, the three men worked with other unknown gang members to traffic victims into the UK to exploit them within the construction industry.
In September 2017, a joint investigation team comprising the Metropolitan Police's modern slavery and kidnap unit, the Crown Prosecution Service, Romanian police and prosecutors, Europol and Eurojust was launched to investigate the criminal network.
The investigation found that victims were deceived by promises of earning £500 every 30 days but instead had their identity cards confiscated and were held in the defendants' overcrowded and poorly kept houses in east London. The gang forged construction qualification documents and put the victims to work at several building sites across London and the surrounding counties.
Throughout the three-year period of offending, the brothers earned more than £1.2m by keeping the workers' wages for themselves.
On 16 October 15 search warrants were executed simultaneously between Romania and London. A total of 33 potential victims of human trafficking, including 24 men, four women and five children, were recovered from four London properties and taken into safety.
The arrest phase marked the latter stages of the three-year international operation, codenamed Operation Cardinas.
The gang was charged with the offences between the 17 October 2018 and 20 February 2019.
Valetin Lupu, 25, and Grigore Lupu, 39, were both sentenced to ten years in prison, while Alexandru Lupu was jailed for eight years.
Detective inspector Rick Sewart, from the Metropolitan Police's modern slavery and kidnap unit, said: "Modern slavery is, and will continue to be, a priority for the Met. We will continue to do everything within our power to identify and apprehend those intent on trafficking human beings and exploiting them for their own gain.
"They key partnerships between the Met, the Romanian authorities, Europol, Eurojust and all of our other partners have been crucial to furthering this investigation into organised people trafficking and exploitation.
"We will continue this valuable work with our international and domestic partners to prevent continued exploitation and bring offenders to justice."
Topics
Bullying
Regulation/enforcement
Construction
News