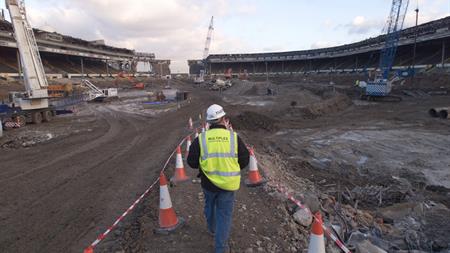 With pump-priming funding from the British Safety Council, Mates in Mind has been registered as a charity and will coordinate a tiered training package targeted at managers down to operatives, provided by partners Mental Health First Aid, the mental health charity, Mind, and the Samaritans.

Launching the programme today at the Royal Institution of Great Britain in central London, Steve Hails, director of health, safety and wellbeing at the Tideway sewer project and chair of the Mates in Mind board, called on the representatives of the UK's construction companies attending the event to commit themselves to the initiative. Attendees included OSH heads from Balfour Beatty and Skanska.

Describing Mates in Mind as "one of the worst kept secrets in the industry", he reminded delegates that the construction industry had called for a consistent approach to tackling mental health at the HCLG's "commitment to action" seminar in April 2016 and this was "what Mates in Mind intends to do".

The programme's first phase will be rolled out this spring in five organisations, including Heathrow, Tideway and Wilmot Dixon. Working in partnership with the non-profit company Mental Health First Aid, the first tier is a two-day programme to train volunteer champions in construction businesses, who can provide immediate support for workers suffering from mental ill health and direct them to specialist help. For more on mental health first aid training, see our feature.

The second tier, provided by Mind, is a 3.5-hour course aimed at supervisory roles and is designed to raise awareness of mental health issues so that supervisors and line managers understand how they can contribute, can identify the signs to watch out for and where to signpost for assistance.

The final tier is to ensure that all staff receive general awareness training in a 45-minute session to "begin the conversation" run by the British Safety Council.

HCLG plans to launch an additional programme focusing on suicide prevention later in the year.

"It's about raising awareness so that people in the industry know it exists and that there are individuals who can provide support and direction for those that are suffering from mental ill health," said Hails.

He added that the HCLG and its partners had set ambitious targets for the programme, including ensuring that 100,000 workers had been through the programme in its first year. Further ahead, he said the ambition was to make sure that 75% of the construction industry had received information on Mates in Mind by 2025.

Mates in Mind is based on the Australian Mates in Construction model, which was set up in 2008 to tackle the high number of suicides in the industry. The UK approach, however, offers a proactive and broader approach.

Speaking to IOSH Magazine, Mike Robinson, chief executive of the British Safety Council, said: "What became clear quite quickly was that simply bringing Mates in Construction to the UK wasn't the most sensible option. The biggest difference was the maturity of the mental health capabilities in the UK. Everyone knows that the Samaritans have a phone line for people who feel at risk of suicide and that didn't exist in Australia. They had to build one and all the support networks. Mates in Mind is focused more on improving the overall mental health of workers in construction."

Robinson said that while the construction sector in the UK had driven Mates in Mind, the long-term aspiration was to extend the programme to other industries. He also said that the programme would need to be adapted for small-to-medium-sized businesses.