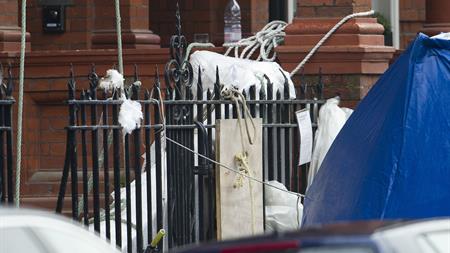 Martinisation London was found guilty last week (19 May) at the Old Bailey. The court heard that Polish nationals Tomasz Procko, 22, and Kyrol Szymanski, 29, were part of a team of construction workers that was renovating the flat in Cadogan Square, Belgravia.

On 21 November 2014, five workmen used a rope to lift the 114.3 kg sofa up from the pavement and over a balustrade into the first-floor dwelling because it was too large to be carried up the stairs.

The railings on the balcony gave way while the furniture was being manoeuvred into the premises and both men fell. Procko was pronounced dead at the scene; Szymanski was taken to a central London hospital in a critical condition but died a short while later.

The Metropolitan Police Service said Martinisation had not provided the workers with a plan, risk assessment or method statement prior to them undertaking the task.

Advice from an experienced and reputable lifting company on how to carry out the process safely was ignored due to time and budgetary constraints.

The Evening Standard reported that the project was behind schedule by the time the sofa was delivered.

Martinisation London had denied the offences but was found guilty of two counts of corporate manslaughter, contrary to s 1(1) of the Corporation Manslaughter and Corporate Homicide Act 2007, and two counts of failure to discharge a duty to ensure the safety of employees.

The company's director, Martin Gutaj, also denied any wrongdoing but the jury found him guilty of two counts of failure to discharge a duty to ensure the safety of employees, contrary to ss 33(1) and 71(1) of the Health and Safety at Work Act. He will be sentenced on 7 July.

Detective sergeant Simon Rogers from the Met Police homicide and major crime command said: "Tomasz Procko and Kyrol Szymanski fell to their deaths during the lifting operation, which was entirely foreseeable and avoidable.

"This was a complex investigation led by the Metropolitan Police Service who worked closely with the Health and Safety Executive over a 30-month period."

Nick Vamos from the Crown Prosecution Service added: "Martinisation and its director Martin Gataj showed an appalling disregard for the safety of their employees, with terrible consequences. The evidence put forward by the prosecution clearly demonstrated to the jury how these tragic deaths were part of a pattern of serious neglect of basic health and safety."