Construction cos fined £700k after four killed at excavation site 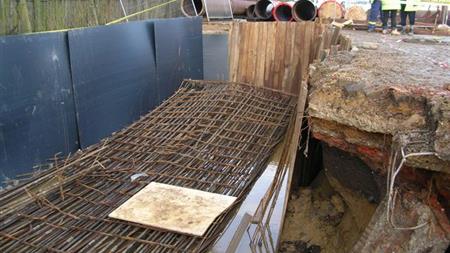 The Old Bailey was told that Claxton Engineering Services, an engineering and service company that operates in the oil and gas industry, hired Encompass Project Management to construct a large pressure test facility (PTF) at its headquarters in Great Yarmouth for the high-pressure testing of pipes.

On 21 January 2011, as Peter Johnson, Adam Taylor and brothers Thomas and Daniel Hazelton were building the reinforcement structure, it collapsed on them. Despite a large-scale emergency response to try and rescue the trapped men, they were pronounced dead at the scene.

The excavation for the PTF was more than 23 m long, 3 m wide and 2 m deep. The horizontal steel cage would have weighed around 32 tonnes when completed.

The Health and Safety Executive's (HSE) investigation found that Claxton, Encompass and Encompass's director David Groucott had failed to plan, manage and monitor the project.

Claxton Engineering Services pleaded guilty to breaching reg 9(1)(a) of the Construction (Design and Management) Regulations 2007, for failing its duty as client to ensure construction work could be completed without risk to peoples' safety. It was fined £500,000 and ordered to pay costs of £100,000.

In a statement, the company said: "Claxton Engineering Services has accepted that it breached [reg 9(1)(a) of the CDM Regulations] as client in a construction project at Bureside House in 2011. The company accepts the sentence that was imposed by the court on 25 May 2017.

"We continue to feel the deepest sympathy for the families who lost their loved ones."

Encompass Project Management pleaded guilty to breaching s 3(1) of the Health and Safety at Work Act. It was fined £200,000 and ordered to pay costs of £50,000.

Groucott pleaded guilty to breaching s 37(1) of the Health and Safety at Work Act. He was sentenced to a seven and a half month custodial sentence, suspended for two years. He was ordered to complete 200 hours of unpaid community work within 12 months, and also ordered to pay costs of £7,500.

Charges against Hazegood Construction were ordered to lie on file.

Head of operations at the HSE's construction division, Annette Hall, said: "Those sentenced today failed the four workers who died. They didn't carry out their legal duties, leading to the events which caused their deaths.

"This was a long-term, large-scale and complex civil engineering project which needed to be planned, designed, managed and monitored effectively. The tragedy here is that, in the months leading up to the accident, any one of these parties could and should have asked basic questions about building the structure safely. Such an intervention could have avoided the tragic outcome of this entirely preventable accident."