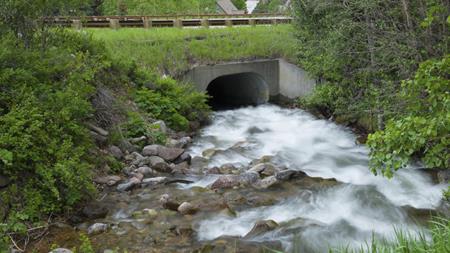 Enterprise was appointed by Kent County Council to replace a damaged culvert (a structure that allows water to flow beneath roads or railways) under Tudeley Lane Tonbridge. Enterprise assigned most of the work to Topbond.

Michael Skitt and two co-workers entered an area between two culverts to clear a channel for the remaining water to flow through. They started to remove loose material, but hadn't yet started digging, when the culvert that was due to be replaced gave way.

One man jumped out of the way, another was hit but escaped and Skitt was trapped. He spent 26 days in hospital recovering from a broken shoulder blade and shin, and a dislocated knee.

The Health and Safety Executive (HSE) said the structure's stability was not properly assessed and a lack of sufficient planning meant control measures were not implemented. The culvert's original designers/engineers had informed Enterprise and Topbond that there was a possibility the structure could collapse. It should either have been demolished earlier in the project or support structures put in place.

"The culvert was being replaced because it had been damaged previously. Just this one piece of information should have been enough to ensure both contractors assessed the stability of the culvert throughout the work and took appropriate measures to ensure people were protected from the risk of collapse," said HSE inspector Nicola Wellard.