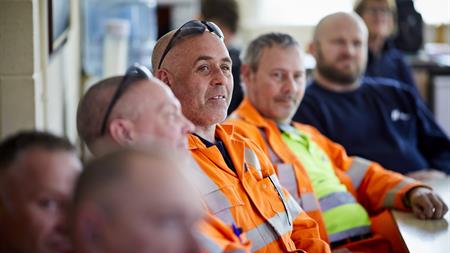 The Stop. Make a Change campaign is thought to be the largest stand-down event in UK construction and will see 60,000 workers halt work to discuss mental health, plant safety, fatigue and respiratory illness.

Since the initiative was launched in November 2016, more than 50 organisations, including construction leaders BAM Nuttall, Balfour Beatty, Costain, Morgan Sindall and Skanska, have signed up.

More than 30 of the signatories will make specific commitments on the four priorities, which will be discussed with employees and suppliers throughout the day and will identify how the industry can work to improve performance. Over the course of the day, employees at more than 1,000 sites, offices and production facilities are expected to participate in the stand-down.

The four priority areas for action: mental health, fatigue, plant safety and respiratory health were chosen by an industry expert panel. Participating organisations can decide their own commitments to improve OSH performance.

Campaign organiser the Civil Engineering Contractors Association (CECA) has provided guidance on employer commitments. These include supporting the construction industry's Mates in Mind mental health campaign and signing up to respiratory health campaigns such as IOSH's No Time To Lose and the British Occupational Hygiene Society's Breathe Freely.

It has also proposed commitments that reflect good practice interventions, such as educating staff on fatigue risk. One of CECA's suggestions for plant safety is for signatories to agree to reduce unintended plant movement.

Stop. Make a Change is supported by the Construction Industry Training Board (CITB) through its structured fund, which allocates sums between £100,000 and £3m to initiatives by employers registered with the board. On 11 October, the CECA will host an event at the Postal Museum to publicise a good practice guide, which will reflect the commitments made by the campaign signatories.

Longer term, each organisation will report back on the impact of the commitments made, which will be shared ahead of the 2018 Stop. Make a Change event.

CITB chief executive Sarah Beale said: "It's great to see so many employers getting behind this important campaign. While we know that there have been sustained improvements in health and safety in recent years, there is much more to be done. Stop. Make a Change signals a new, heightened awareness of health and wellbeing issues among construction firms and their employees across the UK, which CITB is pleased to support."