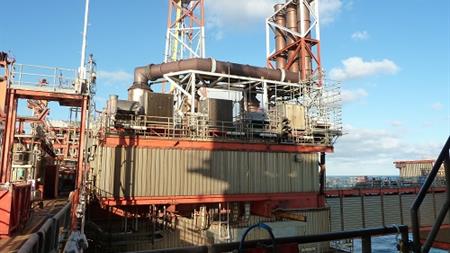 The LOGGS complex comprises five interlinked platforms. It has its own wells and also feeds natural gas from other platforms to the Theddlethorpe gas terminal on the Lincolnshire coast.

Two fitters operating under a permit to work had ensured the gas feed to the control valve was isolated but had also removed a pressure safety valve above the Hamilton Hale valve as part of the refitting operation along with a 4 inch flexible hose which connected it to a high pressure venting system which releases excess gas from equipment on the platform.

Having reinstalled the Hale Hamilton valve but not the pressure safety valve or hose, the fitters left the turbine hall for a tea break with other workers in the adjacent platform which houses the accommodation block.

Elsewhere in the complex LOGGS workers were depressurising a sphere launcher, used to project a ball under pressure down pipelines to clean them. On another part of the installation a compressor was being powered up. Both the exhaust gas from this operation and gas released from the sphere launcher flowed into the high pressure vent which would normally have been diverted it tens of metres up the platform's vent stack to be dispersed harmlessly into the air.

The missing hose meant gas began to vent directly into the turbine hall, triggering an alarm. Since multiple gas detectors registered the release, the system went into an automatic "blowdown", a safety measure venting all the stored gas on LOGGS to reduce the hazard. But the venting gas also had to pass through the high-pressure vent, so though almost 8.5 tonnes vented through the stack, 603 kilogrammes filled the turbine hall. This was twice the volume needed to classify the escape as a "major release". 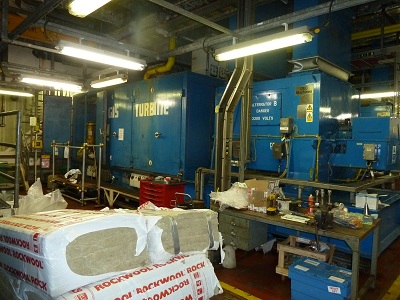 HSE inspector John Hawkins said if the gas in the hall had ignited it could have threatened the 66 employees in the accommodation unit metres away and those who passed the turbine hall on their way to the muster station.

Immediately after the blowdown, the installation manager was not able to properly assess the status of the complex without leaving the accommodation block because of a fault in the emergency monitoring system. "Effectively they didn't know where the incident had occurred," said Hawkins. Another system fault led the manager to believe all the gas had vented from the platform, whereas the blowdown was only partial. Seven workers were sent out at high risk with gas detectors. They eventually vented the turbine hall by propping the door open.

The next morning the night shift operator, Geoffrey Robinson, came on duty and traced the problem to the missing hose and valve and gained permission to close another adjacent valve VH217.

A second blowdown was triggered by the safety system the next day when the batteries of LOGGS' uninterruptible power supply ran down, releasing the residual gas. Only Robinson's closure of the VH217 valve prevented another release of gas into the turbine hall. "It could have happened earlier," said Hawkins of the power loss and blowdown, "and if there had been people in the turbine hall it could have been awful."

He said there was nothing wrong with ConocoPhillips procedures, "other than that they weren't being followed.

"The planning was awry," he added. "Some of the permits weren't filled in properly and some of the risk assessments hadn't been completed properly."

"If someone who was associated with the permit had actually gone out to the workplace and looked for themselves they would have seen that it wasn't just a case of taking the Hale Hamilton valve out and putting it in again. There was more to it."

He said the installation drawings, which would have shown the need to isolate the high pressure venting system, were not consulted before the work.

A review of permits showed that Hale Hamilton valves had been replaced on the other two turbines during the year without full isolation of the gas supply, risking similar releases.
The HSE served ConocoPhillips with a prohibition notice on 13 December 2012 and on 21 December confirmed that its LOGGS incident command system had been modified to prevent similar incidents.

The company pleaded guilty to three breaches of the Offshore Installations (Prevention of Fire and Explosion, and Emergency Response) Regulations 1995 for failing to take measures to prevent uncontrolled hydrocarbon releases at Lincoln Crown Court. On 8 February it was fined £3m and ordered to pay £159,457 in costs.

In his sentencing comments Judge Pini said "A company the size of ConocoPhillips with its vast resources really has no excuse for failure in this regard."

Since the sentencing hearing had begun on 22 January before the new sentencing guidelines came into force, he noted he was not bound by their terms. He also weighed ConocoPhillips early guilty plea, cooperation with the HSE and the fact it had not ignored previous warnings or put profit before safety. He said if the company had contested the case he would have set the fine at £5m.

"This incident mercifully did not result in loss of life or injury, but it had the potential for both," he concluded. "I have reduced the financial penalty to reflect the matters advanced on behalf of the company but the fine has to reflect the seriousness of the case and needs to be large enough to bring the message home where the defendant is a company not only to those who manage it but also to its shareholders."