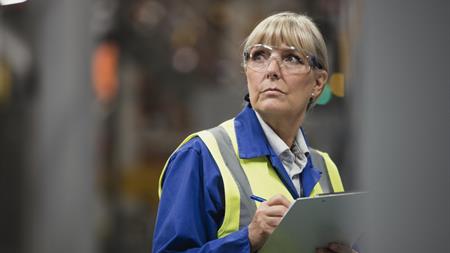 Some 1,409 women took part in the research by YouGov on behalf of the Chartered Institute of Personnel and Development (CIPD). It launched the practical guide yesterday (28 March) in response to the findings, which revealed three-in-five working women aged between 45 and 55 believed their menopause symptoms had negatively impacted them at work.

Of those who were affected, 65% said they were less able to concentrate, 58% felt more stressed, and 52% were less patient with colleagues.

Although 30% had taken sick leave because of their symptoms, only a quarter said they were comfortable telling their manager the real cause of their absence.

Privacy was the reason why 45% of respondents chose not to reveal why they had taken time off work. A third (34%) felt embarrassed and a further 32% said their boss was unsupportive. More women thought they were better supported by their colleagues (48%) when going through the menopause than by their managers (32%).

In The Menopause at Work: a practical guide for people managers, the CIPD calls on employers to train line managers to have sensitive conversations with staff about the menopause, which can cause symptoms including hot flushes and night sweats, mood swings, anxiety or depression and sleep problems, when the menstrual cycle naturally stops as oestrogen levels decline.

As menopausal symptoms on average last four years, the new guide says it is best described as a "transition" rather than a one-off event.

It emphasises that even small changes like having a fan or access to flexible working can make a difference to how women manage their physical symptoms in the workplace.

The guide provides advice for managers on effective management style, including building relationships based on trust and respect so employees feel comfortable about raising health issues, holding regular and informal one-to-one meetings with team members, and asking workers how they are on a regular basis.

In terms of approaching a sensitive conversation, the guide advises line managers to speak calmly and maintain good eye contact, focus on the person not the problem, show empathy, and avoid judgemental or patronising responses.

Rachel Suff, senior policy adviser for the CIPD, said: "It's likely that nearly every workplace in the UK has someone experiencing the menopause right now but many managers are in the dark on how best to support them. Rather than it being a workplace taboo, line managers should be ready to treat the menopause like any other health condition and have open, supportive conversations with women in their teams.

"Our guidance shows that if employers create a culture where everyone can talk openly about health issues, such as the menopause, women are much more likely to feel confident about asking for the support they need to be effective in their role.

"Managers also need to work closely with their HR teams to understand what simple, practical adjustments can be made to help women feel more comfortable and able to manage their work."