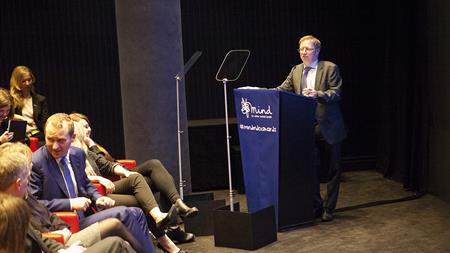 Lendlease, Laing O'Rourke and Morgan Sindall were among 30 organisations that had either demonstrated improvements in promoting mental health among staff or had developed and implemented initiatives to raise the profile of the issue over the last nine months. The commitment made by organisations culminated in the charity's inaugural awards ceremony on 28 March.

Mind introduced the Workplace Wellbeing Index in June 2016. The mental health charity hopes the index will act as a benchmark for best policy and practice and organisations that sign up can access best practice learning from other employers in the index.

Organisations are required to complete staff surveys with mental health support questions between September and December. Mind assesses the findings with other commitment measures. These include whether the organisation has senior leader buy-in and organisational policy on mental health; whether it has any preventative measures and initiatives; how the physical workplace environment affects staff wellbeing; how it has built mental health literacy in the organisation; and any awareness raising and anti-stigma activities that are carried out.

Based on the assessment, Mind ranks the organisations as gold (achieving excellence); silver (achieving impact); and bronze (achieving change). The charity also uses the findings to help organisations improve their support for employees. Mind's "Building on Change" strategy aims to ensure that a million people have good mental health at work by 2021.

At last week's awards, Lendlease achieved a silver award to reflect the "demonstrable achievements" it had made to promote staff mental health. Laing O'Rourke and Morgan Sindall both received bronze awards in recognition that the firms had "started the journey to better mental health at work by developing and implementing initiatives, which promote positive mental health for staff".