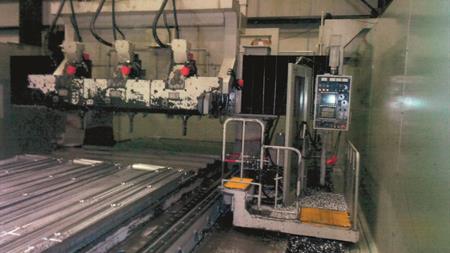 Merthyr Magistrates' Court was told that machine operator Paul Dignam was standing on the control platform of a computer numerical control (CNC) milling machine that he was test programming. The machine's three overhead millers and the linked control platform had started to traverse the horizontal milling bed when Dignam stepped off to adjust the cooling jets.

It is thought he either tripped or slipped, and his right foot became trapped beneath the travelling platform. He was dragged along the length of the 12 m bed with no access to an emergency stop button or any other means of halting the machine.

The worker could free himself only when the platform had reached the end of the bed and changed direction to return to its original position. He sustained two broken ankles and flesh and muscle injuries that required skin and vein grafts. He was off work for 13 months.

Wayne Williams, the Health and Safety Executive (HSE) inspector who led the investigation, told IOSH Magazine that Dignam's injuries were exacerbated by steel grating that was on the floor to allow excess cooling fluid to drain.

The inspector said that CAV Aerospace, which was based in Durham with a total three factories, had identified guarding "issues" with its milling machines but had not installed the necessary safety systems before Dignam's accident on 5 January 2016.

"It hadn't got round to putting those new systems in place at Llantrisant and there were no suitable interim measures implemented," said Williams. "Simple things like a trip bar in front of the moving control panel and insisting on two-man working rather than single working could have been put in place but weren't because the risk assessment and safety operating procedures were inadequate."

The company's LinkedIn page claims it has "some of the largest CNC milling machines in the UK".

Following the incident involving Dignam, CAV Aerospace altered the location of the coolant jets and installed a Castell interlocking system on the doors of the gantry hall to prevent anyone entering the area while the CNC machine was operating.

It fitted a booth on the control platform to ensure machine operators are fully enclosed, and implemented remote working procedures that enabled staff to operate the machinery even when they were not standing on the platform.

The company pleaded guilty to breaching reg 11(1) of the Provision and Use of Work Equipment Regulations but did not attend court. It was fined on 6 September and ordered to pay 5,119 in costs.

In 2015 CAV Aerospace was found guilty of corporate manslaughter and health and safety offences and fined £600,000 at the Old Bailey after worker Paul Bowers died at its warehouse at Cambridge Airport two years earlier.

Bowers was crushed when a poorly stacked pile of metal aircraft components weighing several tonnes toppled on to him on a walkway. CAV Aerospace went into administration in November 2016 and its business and assets have been sold to Northern Aerospace.