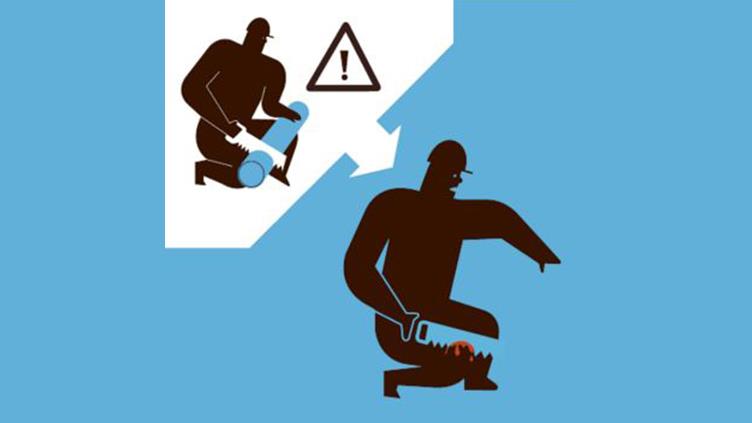 What would you do if you had to alert local workers in multiple countries, many of them unable to read even their native languages, to serious safety and health threats on remote sites? If you were imaginative and watched the right TV shows, you might come up with a suite of visual instructions that are as striking as they are functional.

The man who did just that is Daan van Wieringen, safety manager at Dutch environmental consultancy Tauw.

Tauw's specialisms include water and soil remediation projects in former war zones and contaminated industrial sites, operating at as many as 50 locations a year around the globe.

"There are small projects with ten local workers and a Tauw project manager," says Amsterdam-based van Wieringen, "ranging up to a major European construction project where there were almost 1,000 people on site."

One recent example he offers involved 30 local workers in Vietnam cleaning soil contaminated by pesticide dumps left from the Vietcong's attempts to control rampant mosquito-borne malaria in the 1970s.

"Our pesticides projects are sometimes in the same areas as ammunition stockpiles left over from the war buried in the soil," he says, "so we have to train people in multiple hazards. There's a big overlap between those two environmental issues." 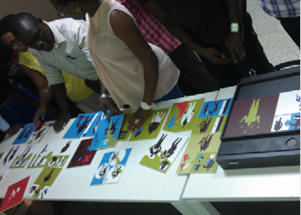 Until recently, Tauw would supply local workers with personal protective equipment (PPE) and train them to use it but with only limited success.

"We had traditional Powerpoint decks of 50 or 60 slides and it was difficult to keep the workers' attention," says van Wieringen. It was also difficult to run the presentations on remote sites with no rest room or electricity and everyone was sitting round one laptop.

"We thought there must be something else we could do; some way to make it more practical." While he was pondering the problem in 2013 he watched a TV quiz that featured short animated sequences from students at Utrecht's University of the Arts.

"I thought 'that's it!'," he recalls. "If there's anybody who could transmit our message in a different way it could be art students. They would have a fresh approach." 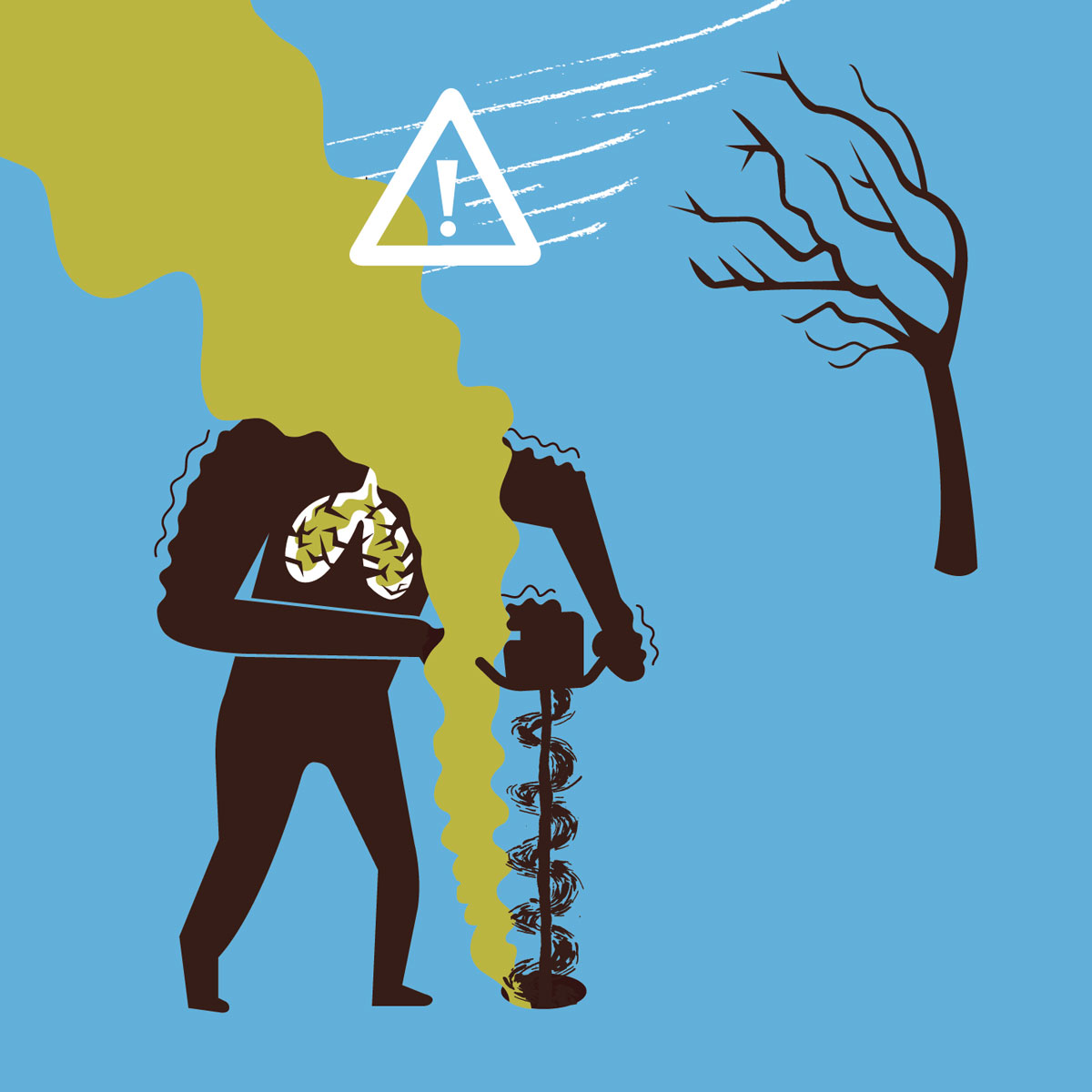 He contacted the university and explained his idea to the teaching staff who enlisted a group of art and design students with a broad brief to come up with a new form of hazard communication.

"We didn't ask for infographics," he says. "It was a process. We gave them the basic conditions: remote locations, no electricity, people who don't read English, some can't read at all; a variety of hazards.

"I gave them photos of our projects and they began to think of communication tools. We provided technical details on all the hazards."

Part of the brief was to create messages that were not dictatorial but showed the consequences of unsafe behaviour and exposure to hazardous materials, to encourage workers to want to avoid them.

Tauw also had strong links with the International Environmental University in Kampf Lintfort, Germany where one of the professors had previously worked for the company. "Some of their students do internships with us," says van Wieringen. "So we thought it would be a good idea to get them involved too, both the environmental students and some from the psychology department."

"They struggled at first," admits van Wieringen, referring to the Utrecht group. "They are art students and wanted to make art. They didn't recognise the limitations immediately."

One student created beautiful designs using paper collage, he says, but they would have been impossible to reproduce and too delicate to transport to the remote sites. 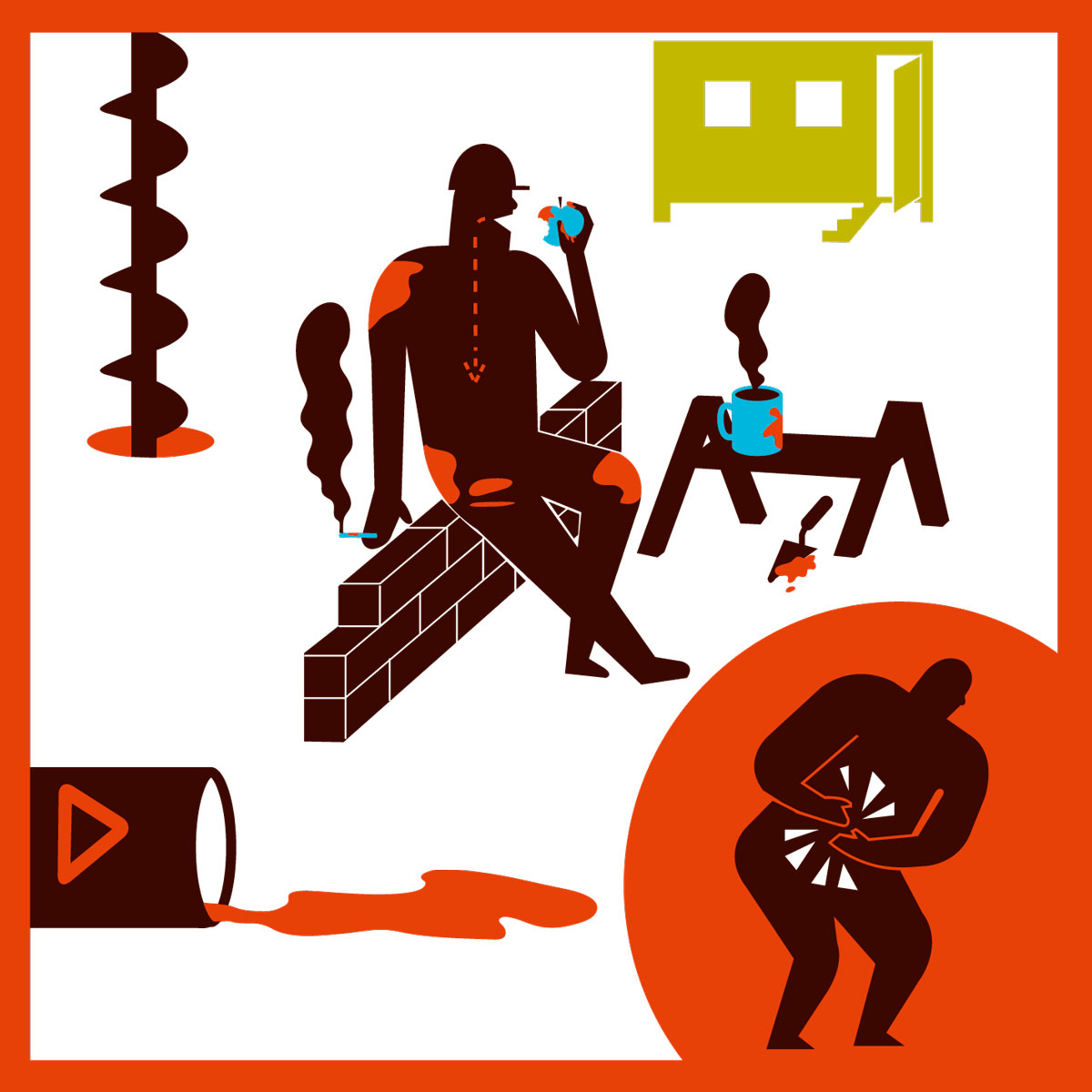 A reminder from Tauw of the restrictions refocused their attention and the idea of printed boards with hazard control pictograms emerged, that could be carried in a bag to sites and displayed to workers.

The students were keen to expand the graphics into various media including animation, but van Wieringen says he kept them focused on the most useful format. "I said let's do one thing very well rather than four things not so well."

As the infographics took shape, the students began to develop a visual shorthand that carries through the finished images, with coloured blotches to represent contamination on skin or clothing and the soil sampling auger, a common tool on Tauw sites, to represent hazardous equipment.

The messages they convey explain everything from the necessity to wear PPE -- the issue that had first exercised van Wieringen -- and food hygiene to electrical isolation and correct disposal of hazardous waste.

The German group of psychology and environmental students was experimenting separately with ideas including a card game to alert workers to hazards, but these never really worked, says van Wieringen. "They were difficult to understand and needed a lot of explanation, and people wouldn't have understood."

Two weeks after the students made their final presentation to Tauw, the pictogram boards, covering 28 main hazards, were printed A3 size and taken to the remediation project in Vietnam.

"We used them as part of train-the-trainer sessions, so people could carry out site inductions," van Wieringen says. To reinforce the messages, copies with magnetic backing were put up on the fencing next to the site entrance.

Since then the cards have been used on projects in the former Soviet countries and Africa's smallest state SÃ£o TomÃ© and Principe.

Van Wieringen says it is difficult to measure precisely the effect of the infographics. "But it's clear that people were more focused." 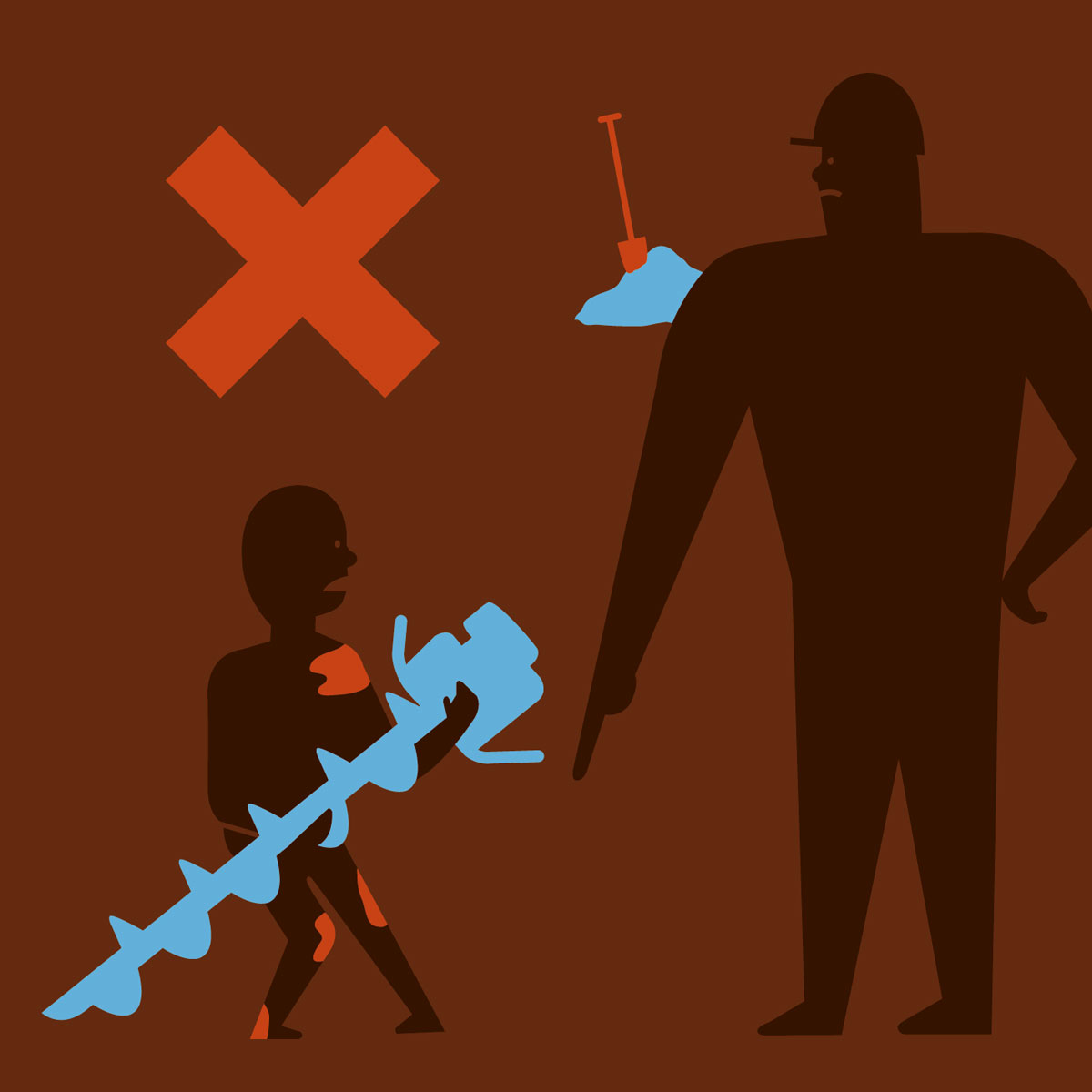 "One of the big issues is secondary exposure," he says. "If workers don't dispose of their PPE properly after working around pesticides, they can expose their families.

"We believe the messages on the infographics about not taking dirty clothes home has reduced that exposure."

"It's about creating awareness," he adds. "We had anecdotes from our African projects about the coveralls we give the workers. At the end of the project those are effectively chemical waste and should be burned. We heard that the disposal bags were being reopened and the elders in the villages were wearing them; they became a kind of status symbol.

"We are trying with the infographics to cut that kind of reuse of PPE. So some of the pictures are deliberately shocking, showing a sick child or mother."

One picture shows a young boy carrying a soil auger. "It's to warn against using child labour," van Wieringen explains. "In the first version the man standing next to the boy was a white man, because it made better graphic contrast. But it's not good to have a white man saying a child cannot work, because then it's white men telling everybody how to behave. It's little details that are important."

Some of the early cards had multiple messages but now they have only one per card, "which makes the tool easier to use".

"You can ask the workers to combine several info graphics into one scenario, so you get an interactive element." 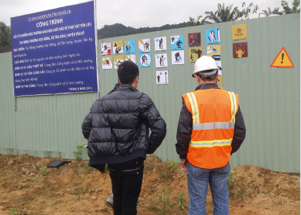 He says in a presentation to a meeting of the Dutch OSH professionals body, groups of practitioners became really engaged in sequencing the boards and discussing their impact.

The infographics were included in the Vietnamese national environmental safety standard for the clean-up of persistent organic pollutants. Now, one of Tauw's largest clients, a major chemicals concern, has asked it to use the visual standards on a large project in Africa this year.

A second group of German students, working after the Utrecht group developed the infographics, researched ways to put the pictures on something that could be given to workers on the projects to take home. Initially, as with the art students, their grasp of the conditions in some of the countries was loose. "They wanted to produce them on a USB memory stick," says van Wieringen, "but since nobody has computers there, that wouldn't have worked."

Eventually they decided to print the images on towels that could be compressed into pellet form and expand in water. "That's very convenient to transport and very useful to the people who are given them," he says. "It reinforces the site messages at home." 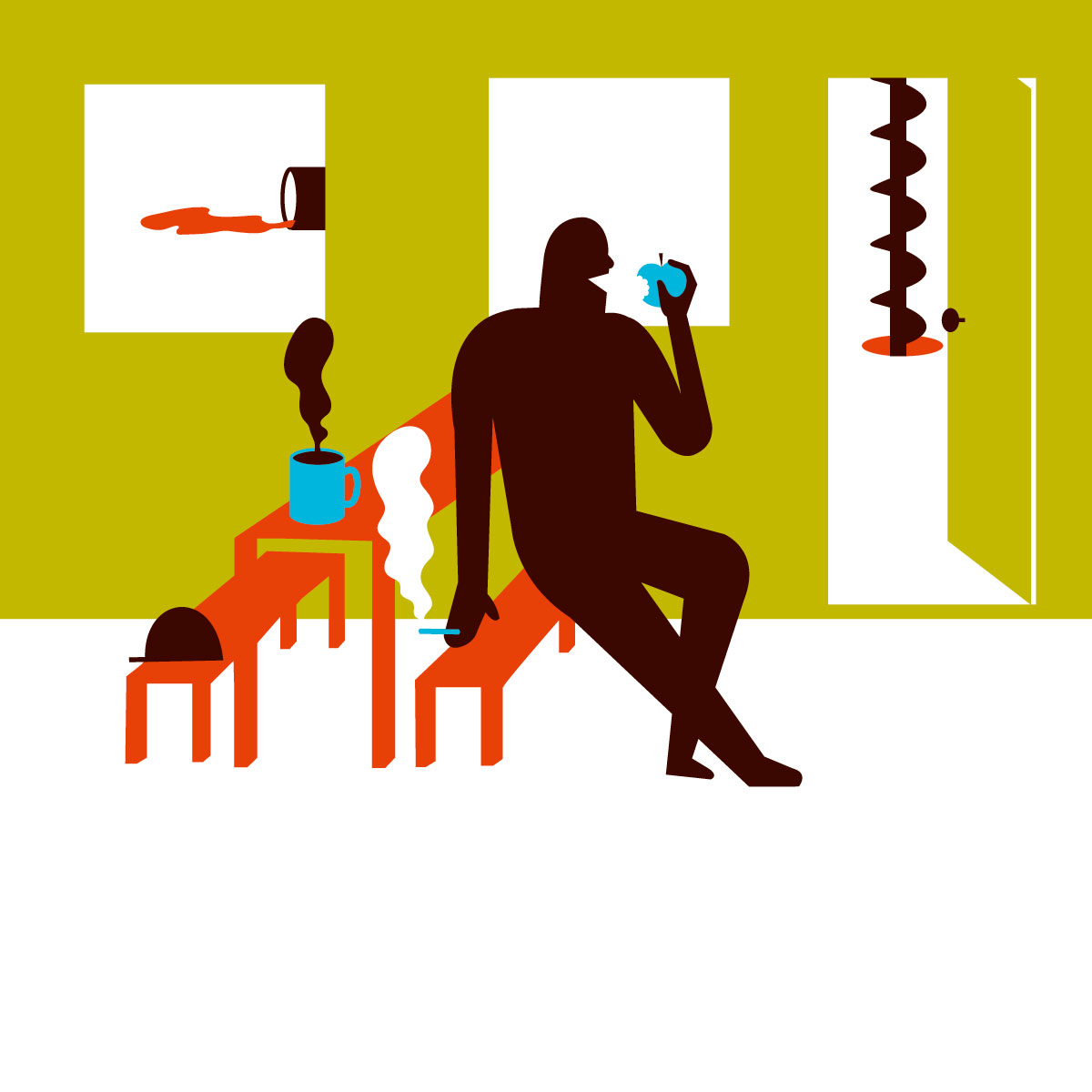 The towels are now being produced and he hopes to use them on a couple of World Bank-funded projects Tauw is due to work on to remove pesticide stockpiles in Africa.

For van Wieringen, the experience of tasking young creatives with a technical challenge has been overwhelmingly positive. "I'd recommend it to anyone who gets the chance," he says. "Working with the students brought such a fresh perspective."