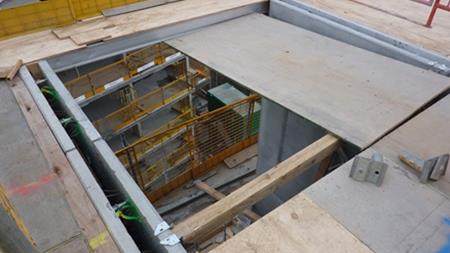 Southwark Crown Court was told that a carpenter and a steel fixer had been standing on the wooden platform above a stairwell opening on the ninth floor of a building. The platform collapsed and they fell approximately 16 m on to a part-built concrete staircase.

The carpenter died of his injuries. The steel fixer was severely hurt and could not return to work for three years.

An engineer's assistant, who was working in the stairwell on a lower level when the accident happened on 29 October 2012, was struck by falling debris and also sustained serious injuries.

The Health and Safety Executive found that platforms similar to the one that collapsed had been fitted on other floors throughout the site, despite not having been built to an agreed safe design. They were made of timber joists held by unsuitable joist hangers with plywood fixed on top.

A site controller had failed to check the quality of the platforms, which were part of "temporary works", the HSE said, even though they were crucial to the safety of those working on upper floors.

Property developer and the principal contractor for the project, St James, part of developers the Berkeley Group, pleaded guilty to breaching reg 22(1)(a) of the Construction (Design and Management) (CDM) Regulations 2007 after it failed to safely plan, manage and monitor the work. It was fined £600,000 and ordered to pay costs of £14,935.

Mitchellson Formwork and Civil Engineering, the contractor responsible for building platforms, was fined £400,000 plus £14,935 in costs after it admitted breaching reg 13(2) of the CDM Regulations 2007 -- also for failing to safely plan, manage and monitor the work carried out under its control.

RGF Construction, a site agent which assisted with managing the work, was found guilty at a hearing on 4 July of breaching regs 13(2) and 28(2) of the same regulations, the latter of which covers the installation of temporary supports and structures. It was fined £20,000.