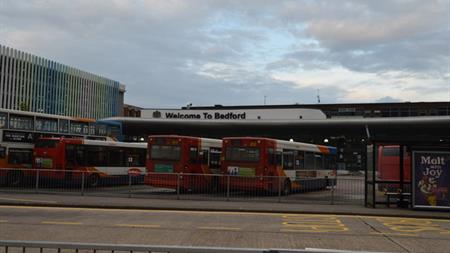 Nicola Berridge, 53, collided with an HGV during the redevelopment of Bedford station on 13 February 2015.

She had stepped through a gap between two buses to get onto a pedestrian crossing partially blocked by the lorry, which was delivering sand to the congested site.

Berridge walked in front of the eight-wheel vehicle as it began to pull away and she suffered "catastrophic and immediately fatal injuries".

St Albans Crown Court heard that the lorry driver checked his mirrors and moved forward slowly but did not see her, most likely because she was out of his field of vision.

The jury was told the bus station site was frequently congested and there was a problem with contractors' vehicles being parked in the working part of the station.

Bedford Borough Council, which owns the bus station and organised the £8m redevelopment programme, pleaded guilty to four charges of breaching the Health and Safety at Work Act.

These include failing to ensure people in their employment were not exposed to risk, failing to make a suitable assessment of the risk to pedestrians being struck by construction vehicles, and not taking reasonable steps to ensure their contractors could work safely.

Bus firm Cambus, a trading name for Stagecoach, denied the charges but was found guilty of failing to discharge a duty to non-employees under the Health and Safety at Work Act between 25 February 2013 and 14 February 2015. It was fined £350,000, with costs to be awarded at a later date.

Speaking after the hearing, HSE inspector Emma Page said: "There were inadequate control measures in place to segregate vehicles and pedestrians at the site and lack of proper planning in terms of pedestrian access and egress to the bus station.

"Hazards associated with vehicles and pedestrians in the same location, particularly the case in a facility such as a bus station in the centre of a busy town, are well known and easily controlled using reasonably practicable precautions."