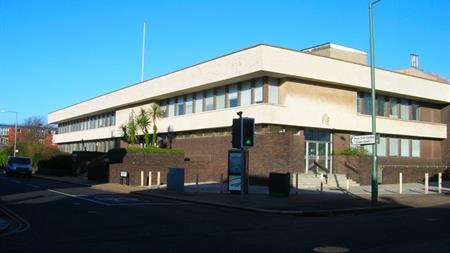 Hove Crown Court was told that Glen Peters (trading as Brow Builders) undermined the structural integrity of the building by digging out the basement in February 2015.

The building's walls were constructed of bungaroosh, a composite of rubble in a hydraulic lime mortar poured into shuttering and allowed to set. It was used for structural walls mainly in Brighton and Hove between the mid-18th and late-19th centuries, when the towns were expanding rapidly and bricks were expensive. The porous composite is susceptible to rot and can become friable in either excessively damp or dry conditions.

An article in the Institute of Historic Building Conservation's (IHBC) magazine says the aggregate for bungaroosh was commonly "flints, brick rubble, lumps of chalk, pieces of wood and anything else that came to hand". It is described by one specialist in an online forum as the "worst building material in the world". The IHBC article quotes a Brighton conservation officer as saying "you could probably demolish a third of the city with a well-aimed hose".

After undermining the bungaroosh walls, Peters failed to follow a structural engineer's recommendations on how to make the property stable again, resulting in the gable wall giving way and the ground floor falling into the basement.

He failed to report the incident to the Health and Safety Executive (HSE) under the Reporting of Injuries, Diseases and Dangerous Occurrences Regulations (RIDDOR).

Nearby homes had to be evacuated and the area cordoned off over fears the public was at risk.

The HSE said Peters did not have sufficient knowledge of bungaroosh. It said those working on properties made from the legacy material "must fully understand what they are dealing with" because the buildings are "more challenging in terms of structural stability".

Peters pleaded guilty to breaching reg 25(1) of the Construction (Design and Management) Regulations 2007 and reg 7 of RIDDOR. He was sentenced to five months in prison for count one and two months for count two, to run concurrently. He was also ordered to pay costs of £7,000.

HSE inspector Emma Stiles said: "Basement work must be properly planned to ensure the structural integrity of the building throughout the construction work. When this type of work is done badly, workers and members of the public are at significant risk of serious injury or death."