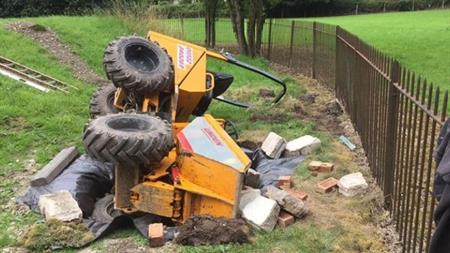 Malcolm Shaun Foyle, trading as S Foyle and Son, failed to report the incident to the Health and Safety Executive (HSE).

The driver sustained several injuries, including a shattered ankle, sheared tibia and fibia and head wounds in the incident, which took place in August 2017.

Swindon Magistrates' Court was told that the driver was helping to install a French drain -- a trench filled with gravel or rock or containing a perforated pipe, which redirects surface water and groundwater away from the area -- in a churchyard along with some roofing work.

The installation involved excavating a sump (a hole full of water), which would then be backfilled with aggregate.

As the driver was approaching the sump, he was unable to stop the 2.5 tonne dumper and drove into the excavation. He was tipped out of the vehicle and trapped beneath it.

The HSE found Foyle had no measures to prevent the excavation's collapse, anyone falling into it or vehicles being driven into it.

The builder pleaded guilty to breaching s 2(1) of the Health and Safety at Work Act and reg 4(1) of the Reporting of Injuries, Diseases and Dangerous Occurrences Regulations 2013. Foyle has been fined £1,685 and must pay £1,166 costs.

In March 2010, Foyle was ordered to pay £3,000 in fines and prosecution costs after two of his employees fell from the upper storey of a building when a temporary work platform collapsed above a stairwell during work in Salisbury on 15 August 2018. One of the workers sustained a fracture.