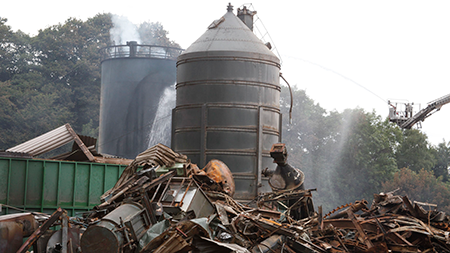 The operators of a mill where four people died in an explosion in 2015 have been charged with corporate manslaughter.

Derek Moore, Dorothy Bailey, Jason Shingler and William Barks were employees at Wood Flour Mills in Bosley when they died in July 2015 after the blast at the mill, which made wood chip products.

Owner Wood Treatment has been charged with corporate manslaughter.

The explosion resulted in a 1,000oC inferno that burned for days before the bodies of the victims were recovered from the wreckage of the mill buildings. The mill dominated the village of Bosley, with many local residents working at the plant.

Director George Boden, 64, was charged with four counts of manslaughter by gross negligence and one charge under s 37 of the Health and Safety at Work Act.

Phillip Smith, 58, was also charged under s 37 of the Health and Safety at Work Act as was Peter Shingler, 56.

The CPS said in a statement: "The company, Mr Boden, and two others who were managers for the company, have also been charged with health and safety offences.

"These decisions were made following a careful review of all of the evidence presented to us by Cheshire Police as a result of their lengthy and complex joint investigation with the Health and Safety Executive."

They will appear before Stockport Magistrates' Court on 2 December 2019.