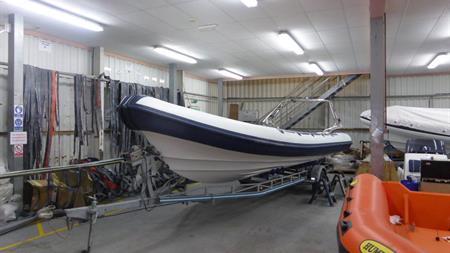 Humber Fabrications has been fined for the incident but an inspector from the Health and Safety Executive (HSE) has confirmed that it no longer uses dichloromethane (DCM).

On 23 March 2016 the 19-year-old trainee was using a cloth soaked in DCM to remove residual glue as well as dirt that had built up while the vessel was in storage at the site in Hull, East Yorkshire.

Hull and Holderness Magistrates' Court was told that he had been working on his hands and knees for about an hour when he felt lightheaded and took a five-minute break before resuming. He fell unconscious and was found by a colleague lying at the bottom of the boat in a pool of DCM.

He was treated at Hull Royal Infirmary for second-degree chemical burns to his arm and back.

DCM is known as a hazardous substance that poses inhalation risks. Overexposure can lead to dizziness, nausea and headaches, loss of consciousness and, in severe cases, death.

HSE inspector James Harvey, who led the investigation, said: "[DCM vapour is] heavier than air and it was settling in the bottom of the boat. The worker was essentially kneeling and working in the vapour and subsequently breathing it in."

The HSE investigation revealed Humber Fabrications had failed to implement suitable control measures for workers cleaning the boats with DCM. There was no local exhaust ventilation (LEV) and industrial vacuum cleaners were sometimes brought in to disperse the fumes.

In response to the incident, on the apprentice's 19th birthday, the company replaced DCM with acetone, which the employees can use to remove only residual glue from the RIBs and with the use of control measures such as an LEV system, RPE and suitable PPE. Pressure washers are now used to clean off the dirt and the boats are covered in plastic sheeting before storage.

Harvey said: "A jet washer sounds simple but using DCM was the default, even though it wasn't always needed. It was overlooked because a company does what a company has always done. Sometimes you just need to take a step back and have a bit of a rethink. Acetone is still a hazardous solvent but one that poses less health risks."

The company installed LEV and provided its staff with face masks and gloves made from neoprene or butyl rubber.