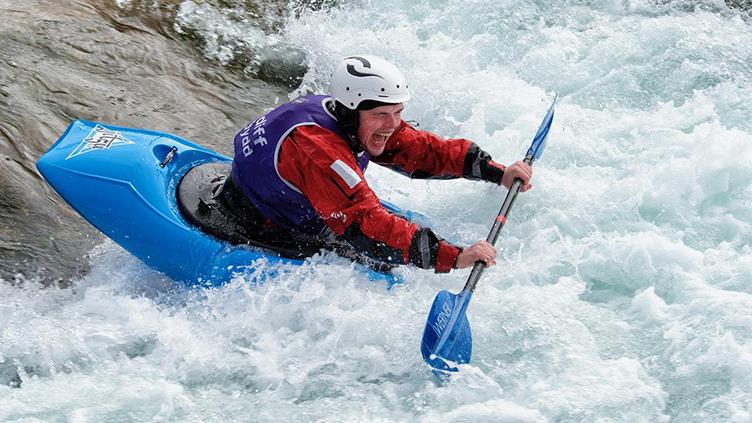 Before university, the main sport I played was rugby. Since I started kayaking, though, I've been skiing, climbing and walking, and I've travelled a lot more.

I learned the basics in the pool at the university club. After three weeks, when it was 4°C outside, I went on my first weekend visit to an "easy" white-water river and spent a lot of time falling out of the boat. I remember waking up on the second morning to find our kit had frozen overnight. I did enjoy the sport because it was so different, but I didn't instantly fall in love with it. Now, though, I've made a really good group of friends doing it; and I met my girlfriend through the club at university.

It helps to be a good swimmer but the idea is to stay in the boat. We wear helmets and buoyancy aids to help us float. It isn't the same as a lifejacket; that would be too heavy. When you're introduced to white water kayaking, you start on rivers that are relatively flat. There might be a bit of ripple or a rapid, and there are rocks on the bottom of the river, but if you fall out you'll just get a few bumps and bruises or, at worst, perhaps a broken finger. 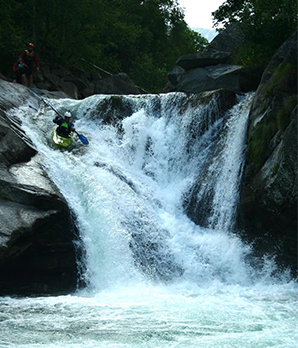 At university, there were two pool sessions a week plus weekend river trips, and I tried to go as often as I could. The more experienced paddlers led the group and passed on their expertise.

After I'd been kayaking for a year and a half, I bought my own boat. I started going out at weekends and trying harder rivers with friends I'd made through the sport. In the UK, the rivers are relatively shallow, so you need it to have rained, which doesn't make for the nicest conditions to paddle in.

But in the French Alps, when winter turns to summer and the snow and ice melt, you can go paddling in the sunshine. In the past few years I've been kayaking in France, Austria and Switzerland. It's one of the best things about it: you can travel the world.

Kayaking is relatively safe at my level, although there have been fatalities. You can put in place as many safety measures as possible but things can still go wrong. My worst incident was when I dislocated my shoulder at Chateau Queyars Gorge in the French Alps. When you are kayaking, the idea is to avoid turning upside down. To do this, we use strokes called "bracing" where you use your paddles to push against the water. I did this slightly incorrectly at the wrong time and my paddles acted as a lever, pulling my arm out of its socket.

My paddles acted as a lever, pulling my arm out of its socket

Fortunately, I managed to paddle the 100 m to where I could seek help, but I then had to be driven down Alpine roads to the nearest hospital with my shoulder still out. You can do everything by the book, but something unforeseen can still happen.

I definitely bring things from kayaking into how I approach work, and the other way around. There's no rulebook for kayaking. You don't have the police or the Health and Safety Executive to investigate or take you to court or issue a prohibition notice. I wouldn't say to someone: "You must wear a helmet." I see wearing a helmet in the same space as wearing a seatbelt. It's more about asking: "Why wouldn't you wear it?" I don't want to play policeman; I just don't want to see people hurt. It's great to think about how you can influence people, empower people, to stay safe.

Two years ago, when I was kayaking at my best, I was definitely paddling for the thrill. It sounds like a clichÃ© but it was about the next biggest river, pushing the boundaries, feeling scared. Now I'm working I have less time for it and I'm not as good as I was, and so it's more about meeting up with friends -- the social side. It's a one-person sport, but you always paddle with at least two others. You're responsible for yourself but you work as a team.

You can access online forums for advice -- someone might post to say there's a tree down somewhere, for example -- and the Environment Agency provides information on river levels. But dynamic risk assessment also comes into it. When I was in Italy, there was a section of river where I got out of the boat to have a look ahead and I just thought: "No, I'm not doing this." That said, you don't always get a dynamic risk assessment totally right because it's you versus mother nature.

My first boat cost £140; there's a relatively good secondhand market. You can spend a lot more: around £1,300 would buy you the Ferrari of boats, and some cost up to £2,000 to 3,000. An entry-level helmet costs around £70. It's not a good idea to buy safety kit second hand because you don't know its history -- and you only get one head.

If white water isn't for you, it's not the only type of kayaking: there are sea kayaking and open-boat canoeing. And it's a sport that's definitely accessible around work -- people do start later in life.

Brits Aboard #TidyEdits - A beater in Austria from Blake May on Vimeo.