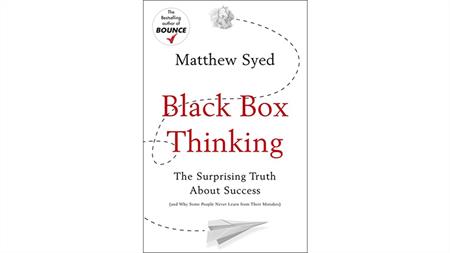 From this starting point Syed moves on into a wide-ranging discussion of why people hate admitting to errors, which is, of course, a pre-requisite for learning from them. He draws on a fascinating spectrum of examples, from healthcare through manufacturing to sport. The repeated messages are that not only must we learn from failure, but that we have to fail (possibly many times) to achieve success. That's true whether you are David Beckham perfecting his penalty taking, Unilever optimising its washing powder production or inventor James Dyson, who, even after he had conceived how he could make a bagless vacuum cleaner using cyclones to capture dust, still went through more than 5,000 iterations or prototypes before the final production version.

There is a lot I like about this book. Firstly, it's very well written and easy to read; many safety books I review are reference works that you dip into -- very few people would ever read them cover to cover. But that's not the case here; though it's a "work" book, you'll genuinely find it hard to put down. And while Syed draws on a lot of other people's experiences and writing, he's not content just to cite them third hand; often he has tracked down the entrepreneur, executive or author and interviewed them.

Much of the material is directly relevant to safety practitioners, especially when they carry out incident investigations or recommend control improvements. Syed stresses, for instance, how easy it is -- and how much a part of human nature -- to look for simple explanations of causality that place responsibility with one person; blaming "pilot error" for air crashes is an obvious example. Then there's the importance, especially when trying out improvements, of having some sort of control group -- as pharmaceuticals companies do for drug testing - so you have evidence of what would have happened without your (hopefully beneficial) intervention.

When I was a consultant, one firm asked me to study ten of its incident investigations to see how good they were and, more importantly, what lessons and preventive action had resulted. Leaving aside one case of dust-related occupational ill health, all these investigations related to injuries reportable to the authorities and they all led to compensation claims of at least £50,000. The results were startling: of the ten, only one had been investigated properly. And in most cases, improvement actions recommended by the investigations had been ignored, unless they were quick, cheap and easy to carry out. If that's a pitfall you'd like to avoid in your own organisation -- whatever sector you are in -- put Black Box Thinking on your reading list.