B&K Structures: safety against the grain 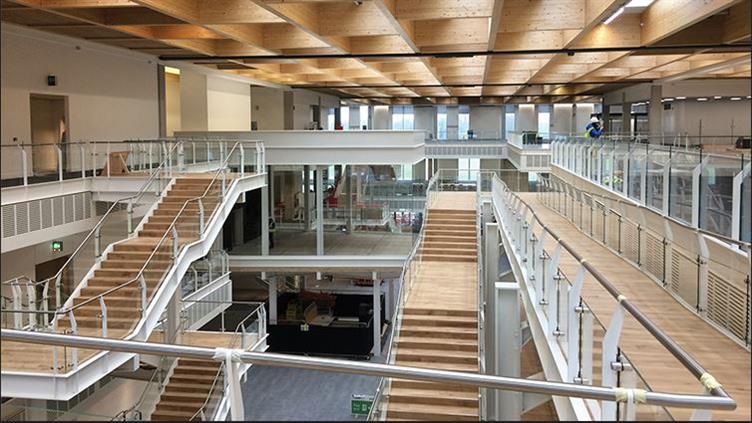 "It's a unique thing we build. There are only a couple of other companies doing it," says David Rodgers, health and safety adviser at B&K Structures. The "it" is building large structures with load-bearing cross-laminated timber (CLT).

Originally dedicated to erecting prefabricated steel structures, Derby-based B&K moved into timber-based construction when the 2008 recession began to bite. As well as CLT, the company works with glulam (glued laminated timber), timber cassettes and hybrids of all three, plus the occasional steel-frame project.

The firm works mainly on retail and residential projects. Its biggest contract to date, Dalston Lane in east London, is set to be the UK's tallest CLT construction. Made of almost 4,000 cu m of timber, which forms the interior and exterior walls, floors and stairs, Regal Homes' 121-unit mixed business and residential development is claimed to be the largest construction of its kind globally. The embodied carbon in its components is estimated to be 2.5 times less than that of an equivalent concrete framed building.

The project began in the middle of 2015 and is due for completion soon. Rodgers says the offsite prefabrication of the CLT panels allows the structure to be erected swiftly and with a relatively small workforce.

"It's quicker than it would be building it out of blocks and cassettes and concrete," he says. The Dalston project has about nine or ten guys, with just one contractor to erect that structure."

He compares the erection of CLT structures to putting together IKEA flat packs, where B&K holds the instructions.

Working exclusively through subcontractors, most of whom have a steel erection background, has brought its challenges. Rodgers has had to explain that, even though the site environment may be similar, they have to do things in a different way. It's a tough message to get over.

"Timber comes as a finished product; it's different from steel," he says. Since structural elements such as glulam beams often come in finished form and will be exposed after they are installed they need more delicate handling than conventional materials. "You can't walk all over it when it's lying on the deck," he says. 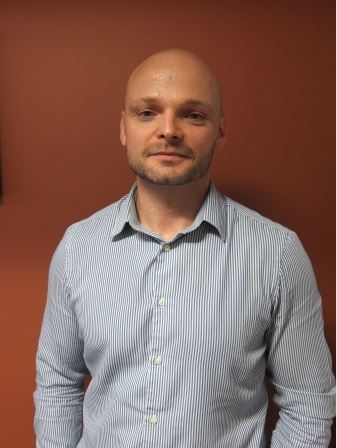 Workers used to erecting steel structures will rarely have used face masks. Though frame-supporting vertical columns are placed on holding bolts which are precast into the concrete slab base, CLT construction requires the building's frames to be fixed onto angle brackets which have to be drilled into the concrete base on site. As a result, Rodgers has had to change the mindsets of workers when it comes to wearing the correct PPE, including dust masks.

"You've just got to keep going on at them to wear a mask," he says. "As a company I think we have got there. Masks are now mandatory for all our subcontractors."

He has also made it compulsory for workers to wear cut-level 4 impact-resistant gloves which have padding on the back when they are erecting steel, laying decking or assembling CLT, in response to a spate of minor hand injuries and bruises caused by handling the timber panels and props. Integrating this level of PPE has involved a lot of discussion with subcontractors.

"I try to engage with a workforce, you've got to speak to the guys at the coalface," he says, "If you shout orders down from an ivory tower, then no one is going to listen to you."

As well as silica dust, CLT construction can expose workers to the risk of hand-arm vibration syndrome (HAVS), due to the volume of drilled and screwed fixings. It's a hazard that steel erectors might not have been exposed to before.

"When you're dealing with timber, there is a huge number of fixings to oversee," Rodgers says. "We have a project in the West Midlands that has 750,000 fixings in the roof, so we have to manage the HAVS risk."

We have a project in the West Midlands that has 750,000 fixings in the roof, so we have to manage the HAVS risk accordingly

Load-bearing CLT walls are stabilised with temporary props that can weigh up to 35 kg. In contrast to steel erection, where work braces are lifted by crane to prop the structure, the CLT props have to be installed manually, with the attendant handling risk.

In September 2014, the CLT structure of University of Nottingham's new laboratory burned to the ground during construction, highlighting one of the major risks of timber contruction. (B&K's rebuild of the structure is shown in the pictures in this article.)

All timber projects have to comply with the 16 steps to fire safety guidance produced by the Structural Timber Association (STA). This includes basic rules such as no smoking on site and no open topped skips within 20 m of the build.

Rodgers also ensures that a fire detection system is installed temporarily during the construction. It is a system that is essential for the project the size of Dalston Lane, which is up to nine storeys tall.

"The site has a heat detection system and a smoke detection system", he explains. "If phase one has a fire, those working on phase four (the ninth floor) need to be made aware quickly."

But there are also OSH benefits that come with this type of timber construction. CLT panels arrive from the factory with cut-outs for doors, windows and services such as soil pipes, all of which minimises the carpentry carried out on site.

Work at height risks are also well controlled. Bars are factory-fitted to the window apertures and then removed on site when the glazed units are fitted. Protection for leading edges on floor panels can also be installed -- screwed straight into the timber -- before they are lifted into place. 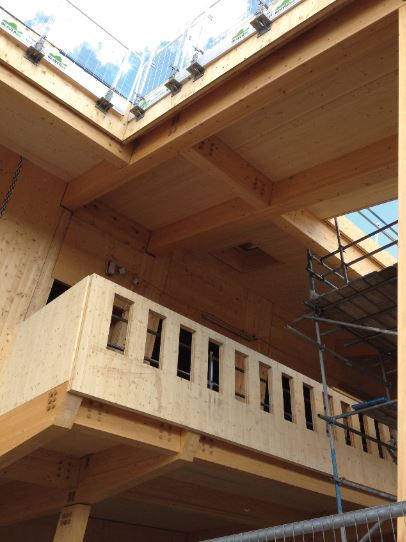 The past 18 months have been busy for Rodgers, who admits that when he first started it was tough to engage with the subcontractors. "They're not actually part of the business, so they can be reluctant to follow your procedures and your method."

His solution is to try to get as close to the subbies as he would to direct employees.

"Myself and the operations manager will try to visit the subcontractors, to ask them what they would like from us, what they expect from us and how we can help them," he says. "We engage them early."

As well as the larger companies, Rodgers also has to work with smaller outfits which do not have dedicated safety and health advisers and where OSH knowledge may be limited.
"We deal with four- and five-man companies. These guys might not be fully aware of what a risk assessment is or might not have heard what a safe system of work involves," he says.

"What they need is someone to come in and say, 'Right, let's look at your procedures. This is what you need to have in your RAMS [Risk Assessment and Method Statement] and your safe systems of works'. So if needs be, I might send them some advice on a Word document or review a couple of policies."

B&K issues all its subcontractors with a health and safety requirement book, which is updated annually. Rodgers also sends out ad-hoc safety alerts when required. "Any serious safety alerts go out to the rest of the company," he explains. "They are then required to carry out a tool-box talk within seven days of the alert being sent out."

Project safety statistics are shared across all the sites. He produces a monthly health and safety dashboard that shows the B&K management injuries and near-misses.

At the end of a project, Rodgers will receive feedback from the site managers on the safety performance of each subcontractor. A subcontractor would be marked down for not following B&K's mandatory policy on tool tethering at height, for example. If the score is too low, they won't be used again.

"It's about going out, looking at what the subcontractors are doing and then going back and feeding into the senior managers," Rodgers says. 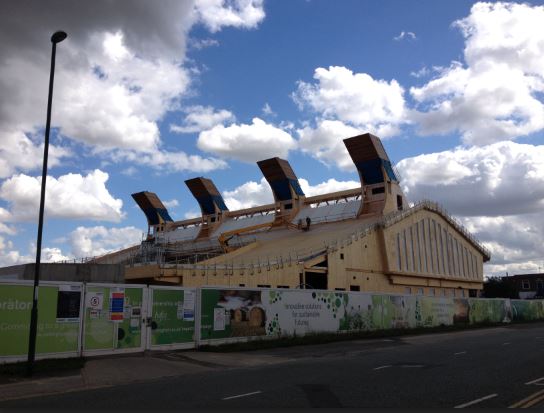 Rodgers admits safety and health is his passion. "I read up on it on my own time. But what I try and do here at B&K Structures is to keep it simple and get it back to the basics."

He began his construction career as a site operative; he was close to a fatality when a trench collapsed on a worker, which made him undertake site manager training and then the NEBOSH general certificate.

"I've been in construction for nearly 15 years and we're overcomplicating things," he observes. "We're putting too much documentation into procedures, stuff that people will never read. How can you engage with people like that?", he asks.

To simplify the paperwork, Rodgers and his team draw up a single general method statement that all contractors can sign. This covers the basic site safety matters, including PPE, site access and welfare. The appendices of the statement are then tailored to the specific project and materials and construction method, such as glulam or CLT.

The goal is to strip back the method, creating a template so workers know exactly what they need to do.
"We are trying to develop something that suits everybody. I think one standard suits all," Rodgers says. "It cuts down the paperwork and the jargon. It's straight to the point and simple."

Rodgers says he is fortunate to have support throughout B&K's management structure. "We've got some really good site managers, really good project managers and both of our directors have a passion for health and safety," he says. "It starts from the top and filters down. That's what creates a safe working culture within an organisation."

Each month the company undertakes one project manager safety tour, two site inspections -- either by Rodgers or a safety consultant -- and a director's safety tour of one project.

"He'll go out and look for good and bad practice and then come back with actions which I'll then follow through," says Rodgers. "The guys out there can see that the director is taking it seriously and it makes them take notice."

Does he feel that the subcontractors are now more engaged? "I think so," he says. "A few months ago they might not have given me the time of day, but now they're phoning me up, and even asking for advice on other projects they are working on."

He says there are signs that once they have bought into B&K Structure's safety culture and they then take it on to other sites.
"Getting a relationship with subcontractors has been difficult, and it's taken two years but I've achieved it and maybe I'm also having an effect outside of my own work," he concludes.

David Rodgers was one of the winners of the IOSH Magazine launch competition. The final winner will feature in the September issue.