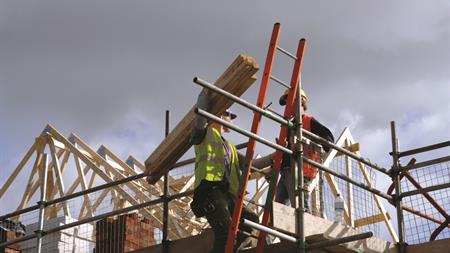 Three-quarters of the total (£646m) comes from musculoskeletal disorders (MSDs), while stress accounts for 21% (£178m).

The study was carried out on behalf of the Institution of Civil Engineers (ICE) by a team led by Loughborough University's professor of construction engineering management, Professor Alistair Gibb.

Gibb presented the findings on 22 January in London to a summit of chief executives and health and safety directors who had gathered to discuss ways their organisations can combat ill-health in the construction industry.

He said: "We need to dot the i's and cross the t's [on the report], but that's what we believe it's costing our industry every year [£848m]. That's a big challenge and something that we need to do something about. But we have a lot of work to do."

The total excludes data relating to occupational cancer, prosecutions and civil claims, or loss of reputation and loss of future contracts.

Gregor Craig, president and CEO of Skanska, outlined research his organisation had carried out as part of the Health in Construction Leadership Group's working group into musculoskeletal damage during plasterboard handling.

"It's well known in the industry that using traditional 1,200 mm boards can harm people's health," he said. "It is rare to see anyone over the age of 45 or 50 undertaking this kind of work due to the chronic impact it has on their health. But do we know which specific tasks are the true causes of harm? And would using smaller boards make a difference?"

Wearable sensor technology firm dorsaVi and specialist fit-out contractor Astins assessed two groups of workers who wore body sensors on their backs and shoulders while operating on two similar construction sites in Cambridge. The first group worked with the standard 1,200 mm boards while the second was given 900 mm boards.

Data collected from the motion sensors revealed a 30% reduction in right shoulder muscle activity in the group lifting the 900 mm boards. In addition, Astins found productivity during first and second fix increased by 10% and 62% respectively in the same group.

"Reducing the size of the plasterboard can have the potential to significantly reduce work-related muscle fatigue and therefore long-term injury," Craig said.

Gibb later commended organisations who pay for employees diagnosed with an MSD to receive private physiotherapy.

"They're actually addressing the issue and now we can start to have a sensible conversation that makes good business sense," he said. "I encourage those of you who are influencing the industry in that way to continue."

The fact the construction industry had failed to address MSDs in the workplace was "appalling", Sir Cary Cooper, Professor of organisational psychology and health at the University of Manchester, said during a panel debate.

He added: "Fifty per cent minimum of MSDs have nothing to do with backache. Imagine you're on a building site suffering from stress. What would you complain about -- a mental health problem or backache, which is often non-diagnosable?"

Cooper said the underlying issue was a lack of training for line managers to support workers with mental health conditions effectively.

During his session on mental ill-health prevention strategies, Roberts told delegates that stigma had prevented one employee from seeking help after an organisational change. This triggered a depressive episode that developed into suicidal thoughts over the next six months.

"Stigma kills," he said, before urging the audience to create a "safe and trusting" management style, take steps to break down the reluctance to talk about mental health, and encourage improvements in emotional intelligence and psychological awareness.

Figures released by the Office for National Statistics last year showed low-skilled male labourers, particularly those in construction roles, were three times more likely to take their own lives than the male national average (bit.ly/2nP3vgZ).

Jerry Swain, national officer for construction at trade union Unite, said: "Our industry is a male-dominated industry, a macho industry to some. Men are seen as being tough [people] who don't get hurt and talking about mental health is still taboo. We need to move on from this."

Shelley Frost, IOSH's director of strategic development, provided an update on how the institution is tackling occupational cancer through its global No Time to Lose campaign.

Frost highlighted that, of the 14,000 new cases of work-related cancer diagnosed each year in Britain, around 4,000 are linked to asbestos exposure. With this in mind she announced that the fourth phase of IOSH's campaign, due to launch in April, will centre on asbestos.