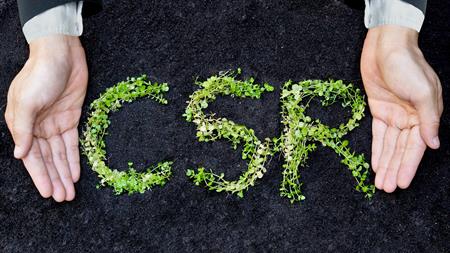 Over half (53%) of all the businesses that responded across the three categories said that they expected the importance of CSR to their organisation to grow in the next 5-10 years. Only 10% said that they did not expect its importance to increase, with the remaining (37%) unsure.

When asked about the top five CSR issues to their business and to construction clients that had asked about their CSR policy or activity, the environment (63%) was cited as the top issue. This was followed by occupational safety and health (55%), employee welfare (50%), ethical behaviour (43%) and supporting local initiatives (37%).

The survey's working definition of CSR was "a voluntary, ethical and strategic approach to action (including action beyond legal requirements) and stakeholder engagement, in support of improved environmental and societal impacts".

Paul Reeve, ECA director of business, told IOSH Magazine that the most pressing environmental issue cited was reducing carbon emissions, and that while occupational safety and health was always important it was not always put under a CSR umbrella. He added that occupational safety and, increasingly, health issues also fell under the employee welfare category in the survey.

Reeve also pointed to last month's Joint Industry Board (JIB)'s Survey of Accidents at Work Report 2016, which shows that the electrical contracting industry has made further improvements in its reportable accident rate. The survey report, based on statistics gathered by the JIB and ECA members, shows that the 2016 accident incident rate for RIDDOR-reportable accidents is only 14% of what it was in 2001.

The ECA has close to 3,000 members, which range from small and medium-sized businesses to nationwide engineering contractors and building services.