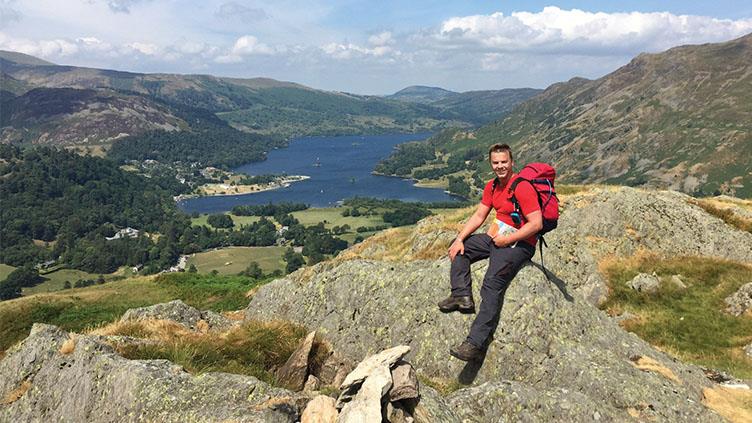 For the past six years I've spent a week each November in the Lake District. My girlfriend has also developed a love of the mountains. We've been to Wales, Shropshire, the Malvern Hills and the Peak District, but the Lake District is our favourite.

Alfred Wainwright wrote seven pictorial guides to the fells of the Lake District. The 214 peaks he described are known as "Wainwrights". I bought a map that lists the Wainwrights so you can tick off the ones you've walked and log the dates. I walked some of them as a kid, but around four or five years ago my girlfriend and I decided we would set a goal to walk them all.

I prefer walking in winter to summer when you have to carry more water -- and the views of a snowy mountain are hard to beat. We visit in November because each year on Remembrance Sunday the Fell and Rock-climbing Club holds a religious service at the summit of Great Gable [in the heart of the Lake District] to remember members of the club who died in the armed services. Around 200 to 300 people go up for the service. It is an unusual experience: normally when you're walking in winter you'll see two or three other people at most on a mountain, and sometimes you won't see anyone.

We had originally planned to go to the service every November but, after five consecutive years, last year we climbed Great Carrs instead to see the wreckage of a Canadian Halifax bomber that crashed there in October 1944. 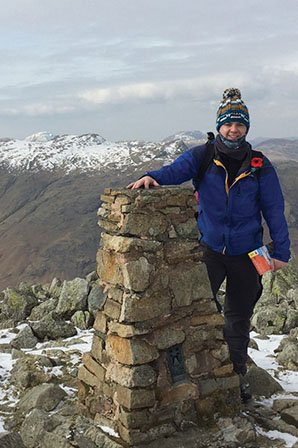 I've walked 58 of the Wainwrights -- around half of those more than once -- and we've now decided not to walk mountains we've already visited. By the end of the year, we hope to have walked more than 70. We've walked most in the central and eastern fells; our favourite place in the Lake District is Grasmere, so we tend to gravitate there after a walk. That's one of the best things: having been cold and wet and then sitting with a beer by a pub fire.

What I get out of mountain walking is perspective. When you're on top of a mountain looking out over these deep valleys, surrounded by mountains, you realise any worries you may have are insignificant. Mountain walking isn't always easy, but what makes it worthwhile is the satisfaction you feel when you get to the bottom and you can look at the photographs you've taken and relive the walk.

I have some great memories from walks in the past: there's a photo of my mum, my dad, my sister, me and our dog on a ridge walk we did when I was around 12 on Striding Edge, Helvellyn.

These days, my girlfriend and I will sometimes take a lightweight tent with us, sleep on the mountain and come down the next day; it's a real escape.

In terms of fitness, I can go three or four months between walks and it's still OK when I next go up. Some of it will be hard, but if you want to stop, you just stop.

Many walkers don't appreciate the risks. I follow various mountain rescue teams on social media and you see news of rescues of people who had gone up in sandals or without waterproofs. People think it's "just" walking, but it's dangerous: it's not uncommon for people to fall, and there are multiple fatalities every year.

Since I've worked in safety and health, the way I prepare for a walk has changed. It's not just a case now of picking up a map and away I go. I research the weather more, using the Mountain Weather Information Service, which enables me to plan my equipment and clothing to suit the conditions. It's a lot like what I would do at work: selecting suitable PPE for a task.

I also research the route -- if I can visualise it, it's easier if the clouds come in. I take a map, compass, GPS unit, my phone (which has Ordnance Survey maps loaded) and a spare battery pack so I can navigate even when one method or device fails. After a walk, we evaluate what happened: if we made a mistake, we'll sit down and work out where we went wrong, and how we could prevent it happening again.

You see all ages when you're walking. I love doing it, but one thing I always keep in mind is that the mountains won't go away: they'll always be there. So, if I'm not feeling comfortable, I'll turn around rather than try to tick one off. The first time we tried to climb Great Carrs, the weather came in and we couldn't see more than a few metres so we turned back. After all, if you're going up to see the views-¦