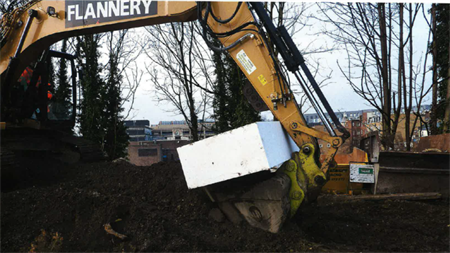 Andrew Stuart was working on the construction of a piling platform -- used for construction plant such as rigs or mobile cranes -- at Redhill Station in Surrey in 2017 when one of the blocks hit him on the head, fracturing three of his vertebrae.

The Health and Safety Executive (HSE) said BAM had not used appropriate lifting accessories, such as chains or strops, to transport the load.

On 20 January an EPS block slipped from the excavator bucket whilst being lowered into place. The HSE's investigation found the lifting operation had not been properly planned and the block was simply held between the arm of the excavator and the bucket.
Stuart still experiences problems after the injury and is likely to be on medication to ease the pain for the foreseeable future.
The company admitted breaching s 2(1) of the Health and Safety at Work Act and was been fined £833,333 and ordered to pay £5,478 costs at Brighton Magistrates' Court.
BAM, which reported a turnover of £750m for 2018, is classed as a "very large" organisation under the sentencing guidelines for safety and health offences.
HSE inspector Andrew Cousins said: "This incident could so easily have been avoided by simply using appropriate lifting accessories such as chains and strops to carry out the lifting operation."
BAM Nuttall was fined £900,000 in April last year after a painter fell through a fragile railway station ceiling into a passenger waiting room and sustained severe ligament damage.
In July 2017 BFK, a joint venture between BAM Nuttall, Ferrovial and Kier, was fined more than £1m over three separate accidents during the construction of the western tunnels for London's Crossrail project.
It was also fined £56,000 in 2014 after workers were exposed to lead during the refurbishment of the Nab Tower, and £140,000 over an incident in 2010 in which a construction worker was crushed under a six tonne concrete and steel beam.
Topics
Lifting operations
Workplace transport
Construction
News