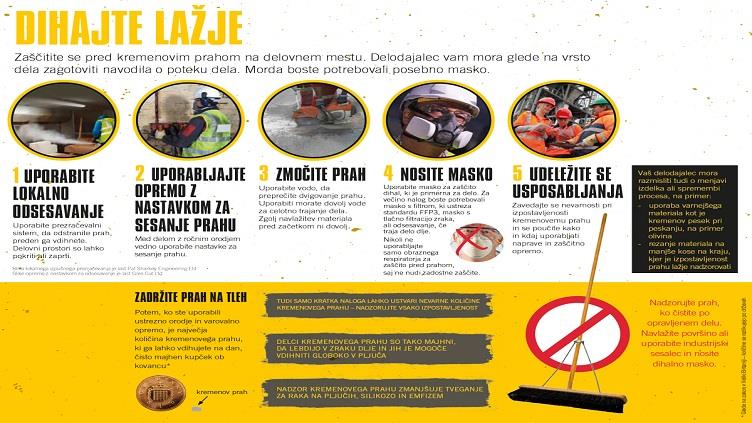 Experts will discuss how the region can work more closely to highlight the issue, and take preventative action, during the Balkan Occupational Safety and Health Network's (BALcanOSHnet) second International Conference for Regional Collaboration.

Graham will highlight the global reach of IOSH's No Time to Lose occupational cancer campaign and cast a spotlight on silica dust as a carcinogen. Malcolm is also to address the conference on the link between diesel engine exhaust emissions and occupational cancer, and share his expertise on excavation safety.

More than 170 organisations worldwide have to-date given their support to No Time to Lose, with the campaign having also been cited as a good practice solution on the tackling occupational cancer by the European 'Roadmap on Carcinogens' initiative.

"The success of the IOSH No Time to Lose campaign on a global scale has been phenomenal," Graham said.

"In sharing this information with other organisations in the Balkans region, IOSH hopes that best practice examples can be translated into genuine lifesaving opportunities."

As part of its support of this conference, IOSH has had the No Time to Lose materials adapted and translated into Slovenian. It follows a commitment to the campaign by conference organisers the Society of Safety Engineers Ljubljana, Slovenian Chamber of Health and Safety at Work and Slovenian Association of Societies of Safety.

Around 400 workers are diagnosed each year with occupational cancers in Slovenia, including 30 cases of the asbestos-related condition mesothelioma. In the past, many businesses in Slovenia used asbestos, resulting in an estimated annual exposure of over 23,000 workers.

Luka Bratec, of the Society of Safety Engineers Ljubljana, said: "We are very honoured to be working with such a world-renowned institution as IOSH.

"The No Time to Lose campaign, with its holistic approach, gives stakeholders practical advice to identify hazards and to provide protection from exposure. The organisation of this conference is our contribution to raising awareness of the issue in support of No Time to Lose."

He added: "Above all, we would like everyone to realise that occupational cancer is a problem in our region, but that there are ways to cope with it - especially if we manage to connect all stakeholders and collaborate between us."

The Institution and its NAC working party have been supporting efforts to set up a network of occupational safety and health organisations across the Balkans in recent years.

The BALcanOSHnet was formed in 2015, with the network having since received EU funding for a three-year project to raise the standards of health and safety in the region.

Malcolm said: "At the first Balkan networks conference in Macedonia last year, I presented a general introduction on the No Time to Lose campaign. Since then the interest has been staggering.

"IOSH has been named as an associate partner in this EU-funded project and we are currently preparing materials from the No Time to Lose campaign, which will be presented at several training days in each of these countries, starting in June 2017."

For more information about the support for No Time to Lose in Slovenia, including the Slovenian campaign materials, visit www.notimetolose.org.uk/slovenia