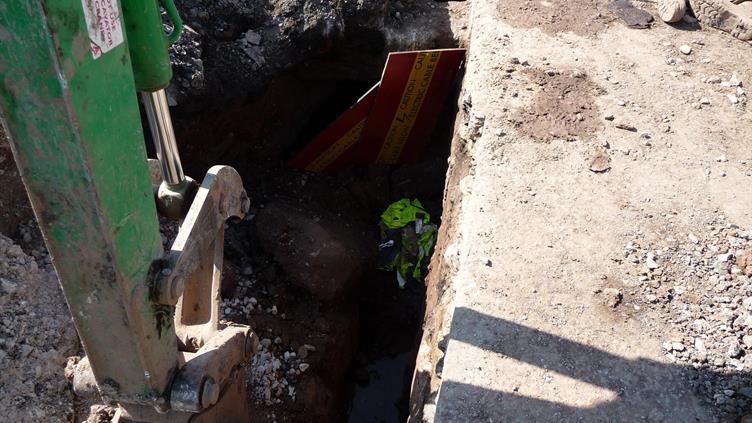 Balfour Beatty Utility Solutions (BBUS) was prosecuted after a worker was killed when a 2.4 m-deep unshored trench collapsed on him while he was laying cable ducting in Heysham, Lancaster for energy firm Dong Energy's Walney offshore windfarm, located in the East Irish Sea.

Dong Energy contracted BBUS to carry out the work and a clause in the contract prohibited BBUS from bringing in subcontractors without Dong's permission. However, when BBUS fell behind with the work after digging was halted by the discovery of protected newts nearby, it brought in another team of workers from L D Oliver Construction and did not inform Dong. These workers, who arrived on site on 6 April 2010, were on a labour-only contract; there was no paperwork and the team was issued Balfour Beatty uniforms and its trucks and plant were reliveried.

The next day the L D Oliver Construction workers started excavating trenches to lay the wind turbines' cable ducting. One of these trenches was by a small road which was frequently used by heavy goods vehicles (HGVs) to access a nearby waste treatment plant. The road had to remain in service and the trench couldn't be moved to a nearby field because of the presence of the newts. As a result, it was extremely narrow (approximately 60 cm wide).

The standard depth of the trench was 1.4 m, however the workers sometimes had to dig down to 2.4 m to pass under existing cables. They did not shore the excavation to stop it collapsing. On 14 April L D Oliver Construction worker James Sim climbed into a 2.4 m deep part of the trench and was kneeling on the bottom connecting the duct pipes. The sides collapsed and he was fatally crushed.

Health and Safety Executive (HSE) inspector Christopher Hatton told IOSH Magazine that there was evidence to suggest that a HGV drove past the excavation, which was on made up ground and inherently unsafe, on route to the waste treatment plant shortly before Sim climbed in and this may have contributed to the collapse.

The HSE found that BBUS's assessment for the project failed to consider the risk of a trench collapse. The company did not provide the dig team with any materials to shore the trench and shoring was not mentioned in the method statement for the work.

Preston Crown Court heard on 6 May that the engineer who wrote the risk assessment and method statement for the project was not sufficiently qualified or trained to do so, nor was he properly supervised because his manager was away at the time.

The judge criticised BBUS's internal system of communication which led to a complete lack of supervision on site. A supervisor from the company was not present and, though it had verbally agreed a labour-only contract, the BBUS foreman mistakenly believed that L D Oliver Construction was a bona-fide subcontractor providing its own supervision.

The court was also told that a few days before the accident occurred, a consultant had raised concerns about the trench and sent an email stating there was water lying in it and the sides were unstable.

"Because L D Oliver Construction was only supplying the labour, there was a discussion whether these workers were employees of Balfour Beatty or not," said Hatton. "The judge said they should be considered employees because no contract was signed, it was all done verbally and it was labour only. But when we came to submitting the charges, Balfour said they'd plead to a Section 3 [of the Health and Safety at Work Act] but not a Section 2."

Under the new sentencing guidelines, which came into force on 1 February this year, the judge concluded that the offence category was high culpability, harm category one (level A seriousness of harm risked with a high likelihood of harm). The defence argued the likelihood of harm was medium because BBUS usually employed safe systems of work, though they had not been followed at this time.

"Judge Brown took this into account," Hatton revealed, "however, he said the consultant report on the collapse risks should have rung alarm bells and the foreman was too inexperienced. He said: 'The incident was entirely foreseeable, entirely avoidable and should never have occurred. Therefore culpability was high.'"

In determining the organisation's size, the judge looked at the whole Balfour Beatty Group, which has a turnover of £3bn a year, because BBUS's accounts were interlinked with the group's and the court was unable to differentiate between the two. The starting point for the fine was £5m, lowered to £4m with the company's mitigation. The final fine was £2.6m when the early guilty plea discount was applied.

BBUS argued in court that the application of these guidelines was "unfair" because of delays which was not the company's fault. The judge said that the delay had been more unfair for the victim's family than the company and acknowledged "it was a result of the police and CPS and not the HSE who brought the case".

"He said 'it was the fickle finger of fate that Balfour Beatty were being caught under these new guidelines'," Hatton said.

Immediately after the accident Balfour Beatty stopped all its trench work projects across the country. It ensured that all risk assessments and method statements were adequate for the work and changed its procedures to ensure a more thorough assessment of excavation work.