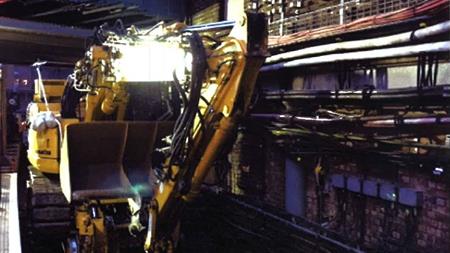 The incident happened at Whitechapel station in east London in the early hours of 4 June 2016 when Balfour Beatty Rail and LUL were working in a joint enterprise arrangement called Track Partnership renewing track on the Metropolitan Line.

Track Partnership had scheduled weekend ballast replacement work at Liverpool Street and Aldgate East stations, using seven RRVs at each site. The 14 machines, which are used for lifting, digging and levelling track, moved in convoy from West Ham sidings to the stations.

Snaresbrook Crown Court was told on 3 December that qualified crane controller Adrian Rascarache had been assigned for the third RRV in the convoy. Director of his own company, North Coast Rail Services, he had been employed by the DBM Global agency, which supplies labour to Track Partnership.

The ORR found the convoy was poorly organised. Not all the RRVs had a crane controller and the second machine was not orientated in the correct direction, which meant that it had to reverse around 6 km, mostly in darkness.

Crane controllers normally walk down the track in front of their assigned RRVs. When the convoy passed through a station, it was common practice for the controllers to mount the platform and walk its length. The court was told that as the convoy progressed, closed-circuit TV showed Rascarache followed this procedure. However, at Whitechapel station there are no steps from the track to the platform.

The crane controller raised his hand to stop the RRV as he had done at other platforms. However, he did not fully turn around to look behind to see if the machine operator had seen his signal. The vehicle had been fitted with bucket and this had restricted the driver's view.

The station platform was about hip height and as he attempted to lift himself up, Rascarache managed to get one leg onto the surface before the RRV caught his trailing leg. The impact spun him around, crushing him between the RRV and the platform edge. The RRV travelled about 2 m before the crane controller's banging and screaming alerted the operator.

Rascarache sustained severe injuries, including several pelvic fractures and a severed artery in his left leg. He required 14 operations, large blood transfusions, and the insertion of metal plates and screws to stabilise his pelvis. He developed a severe infection and later needed a skin graft on his left leg. He is still unable to work.

The ORR found that both companies had failed to adequately assess the risk of moving RRVs in convoy despite knowing what the manoeuvres involved. There was no adequate method statement for the move. The work package plan, which had replaced the method statement, and which included risk assessments, was generic.

On the night of the incident, workers had also not received the required safety briefings before starting their shift, as the sign-in procedure had been deliberately bypassed.

RRV operators and their crane controllers usually communicate when in convoy and at the worksite using a mobile telecoms system called Athena. However, the court was told that because the team was in a rush to leave the West Ham sidings, there was no time to test the system.

The court was told that Track Partnership had adopted a RRV movement method called "send and receive" which had been approved in March 2016. Under this system, RRVs are sent from one control point to the next with only one machine allowed in the section at any one time. The crane controllers are positioned at each point, so they do not walk with machines, reducing the likelihood of someone being run over.

However, "send and receive" was not used on the night of the incident because it was considered a slower method of work.

Balfour Beatty Rail and LUL both pleaded guilty to breaching s 3(1) of the Health and Safety at Work Act (see the table for how the sentencing guidelines were applied). Although the incident resulted in a very severe and life-changing injury, the ORR submitted that Level A harm was risked.

"Immediately following the incident, it was thought by medical professionals that he would not survive," the ORR said.

Balfour Beatty Rail told IOSH Magazine that it has "since taken appropriate corrective action to take the lessons learnt from this incident and shared them across our business".