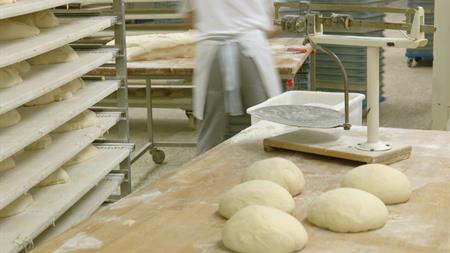 Coopland & Son (Scarborough) failed to suppress airborne dust at its Eastfield bakery in Scarborough between April 2002 and April 2016. Two employees were diagnosed with occupational asthma while a third had developed symptoms.

At the time of the investigation, the bakery employed a single compliance officer, Peter Graham, who was based at the Eastfield head office and was responsible for maintaining the firm's management system.

Graham's CV showed he had no manufacturing or bakery experience and limited knowledge of OSH management. The HSE investigation concluded: "His knowledge of flour dust control, and health surveillance procedures would have been non-existent or limited."

As a respiratory sensitiser, flour dust is currently assigned a workplace exposure limit of 10 mg/m3 over an eight-hour time-weighted average. The industry recognises that reasonable control can achieve dust levels as low as 2 mg/m3.

The Eastfield bakery did not have any local exhaust ventilation (LEV) installed to extract dust. Simple measures to reduce dust generation were not in place and cleaning was mainly by dry brushing and blowing with air lines, which increased the dust, rather than by vacuum cleaners or under wet conditions. Respiratory protective equipment (RPE) was either not worn or had not been face-fit tested.

The HSE concluded that if a competent occupational hygienist had conducted an exposure survey, the bakery would have known about the dust levels.

When the HSE issued a notification of contravention (NOC) on 27 June 2016 instructing the company to undertake air sampling in line with good practice, of 19 areas sampled, only four effectively controlled below 2 mg/m3. One was as high as 14 mg/m3.

In 2013, the bakery engaged the services of Hampton Knight to carry out a more detailed health surveillance of staff at Eastfield. The trial covered around 15 employees who had previously declared symptoms, and at least one, Jennifer Robertshaw, was identified by Knight as being "not fit for continued employment".

Knight advised that there should be restrictions on exposure and recommended further investigation. However, the HSE found no evidence of any follow up actions by the company.

On 16 December 2014, the HSE sent a NOC requiring the bakery to instigate lung-function testing to improve its health surveillance programme. Coopland & Son contracted the services of Elite Executives who visited the site in January 2015 to assess the risk and identify staff that required health surveillance.

Two employees -- Robertshaw and Stuart Connerton -- were diagnosed with occupational asthma. Evidence showed that Robertshaw had been diagnosed by her GP with asthma related to exposure to flour dust from as early as 1999. When the HSE reviewed her health surveillance questionnaire from 2002-2012, it showed consistent recording of symptoms. In 2010, she had written "Asthmatic due to flour" on the form. However, the HSE found no record of any action taken by the company. After Elite Executives referred her to an occupational health physician, who advised the company to report occupational asthma through RIDDOR, her diagnosis was confirmed on 28 April 2016.

Connerton, who was employed from 2003 until 17 December 2015, reported symptoms in January 2015. His own GP diagnosed him with asthma in April 2015. After the bakery referred him to an occupational health physician in September 2015, the diagnosis was confirmed and Connerton was referred to a respiratory specialist. On 12 November it was confirmed he had occupational asthma, which was longstanding but made worse by exposure to flour dust.

A third employee, Susan Casper, who started working for the bakery in 1992, had no asthma symptoms before this date. In 1999, she started to report symptoms and her GP referred her to a chest consultant who diagnosed asthma with an allergy to wheat flour in 2004. Knight advised RPE and referral to an occupational health adviser. However, no action was taken until 2015 when she was moved to the butchers' area where there was minimal flour use.

Coopland & Son, which pleaded guilty to breaching s 2(1) of the Health and Safety at Work Act at Leeds Magistrates' Court, must also pay £4,594.

Since the investigation, the company has worked to an action plan to comply with an improvement notice to control flour dust. It has spent around £232,000 on dust monitoring, installed LEV, substituted to low dust flour and brought in addition support for the compliance officer.