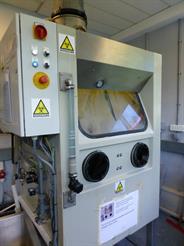 The company, which maintains aircraft components, pleaded guilty to breaching reg 5 of the Control of Vibration at Work Regulations. It was fined £80,000 and ordered to pay costs of £25,297.

The Health and Safety Executive (HSE) visited the site in June 2015 after the company reported under RIDDOR that an agency worker had developed bilateral carpal tunnel syndrome. It found that up to six workers carrying out maintenance on aircraft vacuum toilets had been exposed to hand-arm vibration from a Vapormatt wet-blasting cabinet. This is an enclosed unit with gauntlet openings for a worker to clean the toilet components using a foot pedal-operated blast gun that sprays hot water and abrasives.

HSE inspector Helen Turner found BAAE had not risk-assessed the blasting cabinet's use because it "hadn't recognised that there was a potential risk from vibration".

She told IOSH Magazine "there is no safe level" after the investigation revealed exposure to vibration was likely to have been below the action value of 2.5 m/s2 A(8) -- A(8) is the average exposure over an eight-hour shift.

An occupational health nurse identified that the agency worker had a problem with his hand and organised a specialist referral, after which he was diagnosed with the condition.

Soon afterwards BAAE implemented a safe system of work to control the gun's water pressure, limited its use and provided staff with clear instructions and training. It also improved the pre-cleaning of components to minimise how long they had to be treated in the cabinet.

"Those measures reduced the need to hold [the components and the gun] so workers are not directly in contact with the vibration," Turner said.

Judge Jeremy Jenkins determined that BAAE's culpability was medium and set the harm category as 4. In fixing the fine, he started at £130,000 -- the top end of the range for a medium-sized firm -- before reducing it to £120,000 to reflect its good health and safety record. He awarded a full discount for the early guilty plea.