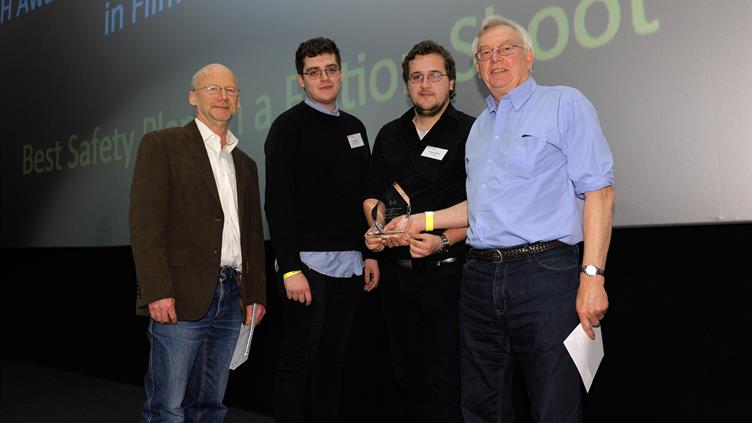 Producer Andrew Oldbury and production manager Aaron Hillier safely shot scenes in moving vehicles, in busy public locations and on rooftops in central London for their film, sie, which they produced as part of their studies at the UK's National Film and Television School (NFTS).

Their commitment to safety and health has led them to be named the winners of the Health and Safety Management in Film Production Award at the NFTS's Graduation Show 2017.

The award, sponsored by the Institution of Occupational Safety and Health's (IOSH) Thames Valley Branch, was announced during the School's showcase event at Picturehouse Central, London, on Monday 20 February.

Andrew, 26, who is a graduating Producing MA student at the NFTS, said: "We faced a number of challenges over the course of the shoot. These stemmed from not having a 'locked' script when we began filming.

"Rather than trying to dictate what could or couldn't appear in the script, the production team and assistant directors worked together to find creative solutions that meant we could film safely whilst also preserving the creative spirit of the project. This allowed us to successfully film a number of tricky scenes."

The winning film, sie, tells the story of a mother's visit to London to celebrate her daughter's 21st birthday. In the process, she is confronted by her daughter's lifestyle, making her consider the choices she herself made in her youth and the life that has passed her by.

Aaron, 22, who is due to graduate from the NFTS's Diploma in Production Management for Film and Television, said the script being in a state of flux meant that they had to be ready for all the eventualities.

He said: "We recced and risk-assessed everything from a Boeing 747, an east London brewery and a five-star hotel on the Southbank.

"Not all of these locations made it into the final script but we had to be prepared for every situation to allow the creative heads of departments to work to the best of their abilities."

After winning the IOSH-sponsored award, the pair reiterated the importance of having safety and health at the heart of any film production.

Andrew said: "A lot of people hear the words 'health and safety' and immediately think of it as bureaucratic red tape. In filmmaking this couldn't be further from the truth -- health and safety actually fosters and enables creativity.

"For example, when we were making sie we had a number of scenes set along a canal path popular with cyclists and members of the public. Rather than abandoning the idea of filming there, we were able to work with the local authorities and put in place a traffic control system that allowed us to film safely without interfering with the public."

Aaron added: "I have been surprised in the past about how casually others working in the industry can treat health and safety. I hope I can be an advocate to challenge this going forward."

It is the 11th consecutive year that the IOSH Thames Valley Branch has sponsored the award, which includes a £1,000 prize.

Chris Stops, chair of the branch's judging panel, said Andrew and Aaron's clear explanation of how safety enhanced the creativity of their film and their appreciation of how the Construction (Design and Management) Regulations 2015 impacted upon their industry, made them worthy winners.

He said: "The film was very innovative in the way in which it created hazards cinematically rather than in reality, so fights and falls from height did not materialise for cast or crew in ways that would otherwise be expected."

Simon Mallin, head of health and safety at NFTS, said: "The ongoing value of the IOSH award to the NFTS is that the assessment and selection is made by professionals from outside the School.

"This greatly helps to ensure that the vision of health and safety that our students receive is not just that from the School."

Read more about the National Film and Television School's approach to safety and health here.