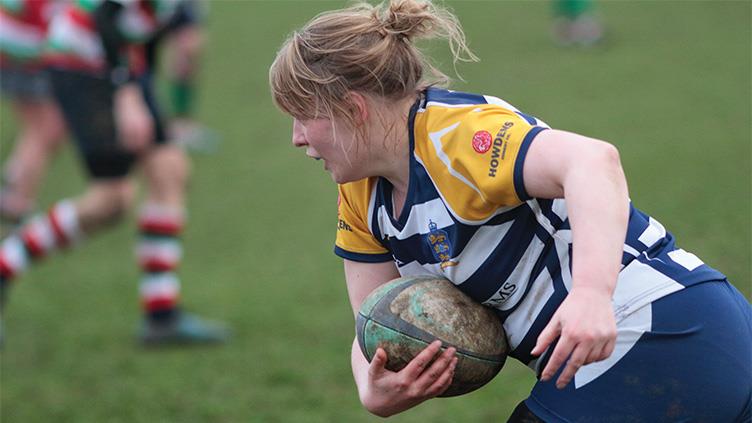 At that time women's rugby wasn't as popular in the North of England as it is now, and there weren't many rugby union teams in the area. In my first year playing, we organised for five local clubs, all of which were struggling to front a full team, to get together and we started playing as Yorkshire Ladies' Barbarians. This enabled us to play matches and recruit more players. Three of those five clubs now have teams playing in the same league, which shows how fast women's rugby is gaining in popularity.

I joined York RI Ladies when we formed our own team and I've played for the team ever since, mainly in second row or as a flanker. 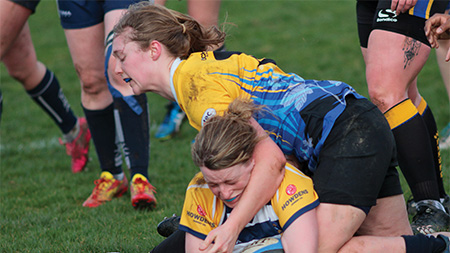 I became involved in coaching and first-aid provision soon after joining. My job as a health and safety adviser focuses on identifying and reducing risks, so it was a natural development. I coach the players on the elements of the game where there are safety risks and how to reduce them by using the correct technique and developing physical fitness.

When it comes to first aid, I see a lot more incidents on the pitch than I do in my day job. We ensure first aiders are always available when we're playing and first aid kits are readily available and well stocked. Rugby is a demanding sport that requires a lot of concentration so it is better if the first aider is not out on the pitch playing. We try to select coaches, managers or other non-playing members of the team for the role. Emergency response is an important element: keeping calm, giving injured players space, and assessing their state.

Concussion awareness is an important focus for the Rugby Football Union. We have trained our players in how to recognise and prevent it. We have also trained them on how to recover from concussion by creating training programmes based on the RFU's "Headcase" advice and materials.

Understanding how the rules of the game are changing to reduce risks is key. For example, there are now stricter guidelines about high tackles to reduce injury risk. In January 2017, new guidelines came into force to reduce head injuries. A red or yellow card can be issued for reckless and accidental contact with the head, which has encouraged players to lower the tackle height.

It's the social aspect of rugby I enjoy most. I've been on the club's committee since I started playing for York RI Ladies and I'm now social secretary. We have at least one social event a month. Earlier in the year we had a day at the beach in Filey where players brought their families and friends. In August, a group of us travelled to Belfast to watch the Women's Rugby World Cup. Tamara Taylor and Ruth Laybourn from the England squad have both taken guest coach sessions at York RI Ladies.

We train twice a week. On a Tuesday, we focus on what we learned from the game the previous week and then build on these skills and fitness levels on the Thursday. Many of those who come down have no experience of playing -- as it was in my case. We will take recruits to one side if they don't feel confident and coach them on a one-to-one basis until they feel confident enough to join in. Others want to get involved straightaway. Either way, there are always lots of experienced players and coaches around to help.

Being on the rugby committee has made me realise the importance of safety committees in the workplace to drive change. Creating an environment where people feel they can have honest conversations about safety allows them to raise issues that might otherwise go unnoticed. If you train safety committee members and give them defined roles, they can be a great resource for a business. Individuals can help promote campaigns, educate employees on new policies and procedures, and encourage others to report shortcomings, which all helps to make the workplace safer.