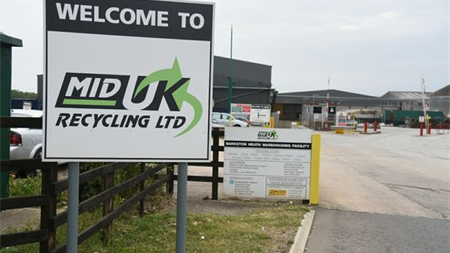 On 26 April 2015 the employee was working as a line operator when the line became blocked, with waste wrapping around the axle and stopping a lower conveyor. As the worker attempted to remove the blockage, his glove was dragged into the in-running nip between the belt and the powered roller of the conveyor. His left arm had to be amputated above the elbow.

A Health and Safety Executive (HSE) investigation revealed that the company, which recycles a combination of agricultural, commercial and industrial waste, green waste, paper and cardboard, plasterboard and wood waste, had failed to prevent access to dangerous parts of the conveyor. The castell key system had essentially been bypassed, allowing the system to be operated in automatic mode with persons still inside the enclosure.

At Lincoln Crown Court, Mid UK Recycling -- which was sold to rival New Earth Solutions (West), a subsidiary of the Irish-based waste recycling group Beauparc earlier this year -- admitted breaching S 2 (1) of the Health and Safety at Work Act and was fined £1.275m plus costs of £45,065.

"This incident could so easily have been avoided had the company ensured that the system designed to keep people away from dangerous machinery was properly maintained," said HSE inspector Scott Wynne said. "Companies should be aware that HSE will not hesitate to take appropriate enforcement action against those that fall below the required standards."

According to documents filed at Companies House, Mid-UK Recycling had a turnover of £37.6m in 2017.

Mid UK, headquartered in Caythorpe, Lincolnshire, employs 420 staff also and operates from six other sites in Lincolnshire. It has been hit by a string of serious fires in the past 12 months and was fined £880,000 in 2017 after an agency worker died when he was dragged through a waste-sorting trommel and then through industrial waste shredder. Two of its directors were handed suspended prison sentences.