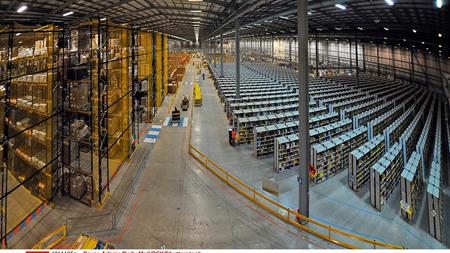 Freedom of Information requests (FOIs) made by the GMB to ambulance services showed hundreds of callouts had been made from 14 of Amazon's sites. Patients were taken to hospital in more than half the cases.

Amazon has denied the claims and a spokesperson said it was "simply not correct to suggest that we have unsafe working conditions based on this data".

The figures showed there were 115 calls made from the Rugeley fulfilment centre in Staffordshire, including three for major trauma, eight for people who were unconscious, two for electric shocks, and one when a building was on fire. Three related to pregnancy or maternity issues. The most common reasons for ambulance callouts were chest pains (24) and breathing problems (14). About 1,800 people are employed at the Rugeley site.

In comparison, eight ambulance calls were made over the same period from a nearby Tesco warehouse of a similar size (700,000 sq ft), another FOI request by GMB shows.

The Amazon spokesperson added: "Requests for ambulance services at our fulfilment centres are predominantly associated with personal health events and are not work related. Nevertheless, ambulance visits at our UK fulfilment centres last year was 0.00001 per worked hour, which is dramatically low."

The internet retailer was also reported as saying it had 43% fewer injuries than other companies that operate in the transport and warehouse sectors.

In a recent survey of GMB members working at Amazon's warehouses, the union found 87% said they were in constant or occasional pain due to their workload. The results of the survey will be presented at GMB's annual congress, which starts today (4 June) in Brighton.

One pregnant woman complained of having to stand throughout her ten-hour shift, while others said they were treated like robots and slaves. Another employee likened working in an Amazon warehouse to "living in a prison".