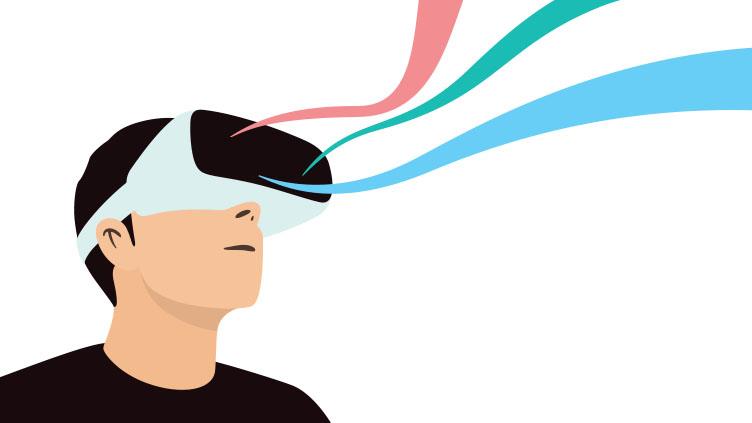 Virtual reality comes in many forms. Current versions involve viewing a virtual world inside a head mounted display (HMD) shutting out the real world. If you can still see your immediate surroundings, that's augmented reality -- a subject for another article. The virtual world might be a computer-generated 3D environment or a 360o video.

Though 360o video is immersive and useful in some contexts, it is not virtual reality (VR). Both 360 and VR allow the user to choose where to look, but with 360o video you cannot change the story or interact with objects in the virtual world. Another distinction is movement -- in VR you can change your position in the environment (see box below). With 360o video you can stand only where the camera was when the film was made.

John Fecci, commercial director at VR Learning Studio, says: "360 lets you see the job; VR helps you to learn to do the job."

Lewis Young, animation and VR director at Polar Media, adds: "VR gives people the freedom to make the right or the wrong choices, and to fail safely."

The safety simulator that Polar Media created for business services organisation Lloyd's Register (LR) shows users the consequences when they make the wrong choices. In the simulation developed for Lloyd's I found myself on an oil rig, and I was challenged to identify and fix safety breaches. If I didn't spot the problem, a crash-test dummy would fall from height or be crushed by equipment.

Young says: "We considered more realistic people, but the examples were based on real accidents where real people were hurt. The dummies demonstrated the idea, without the gore." The LR simulator demonstrates some other benefits of VR, he adds: "We can give people access to equipment that is too big to move and we can take people somewhere that is too expensive or difficult to reach. In this case it was offshore, but VR can also be used to see inside something that hasn't even been built yet."

VR can also provide access to equipment that is "used up" by traditional training, and expensive to replace. Billy Hare, professor of construction management at Glasgow Caledonian University, identified skill decay in emergency procedures as a serious problem for technicians working at height on wind farms. "Operatives lose the ability to perform a rescue if left without practice after about three months," he says. "The mandated training is bi-annual."

Hare says more frequent real-world training is expensive because the rescue equipment used has to be sent back to manufacturers for recalibration. He is keen to see a VR solution. "We are in discussions with a training provider and using the skills of our gaming students to develop a prototype VR simulator. We hope to apply for funding to develop something more substantial. Ideally, we could replicate different types of equipment in VR to provide choice, depending on which kit an operative might be working with from day to day."

Our starting point was high-risk activities which would either be dangerous or very expensive to replicate, such as work at height 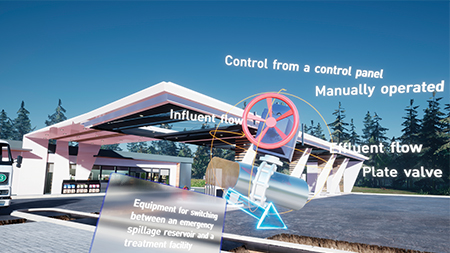 If it is expensive to use up kit and equipment, it's even more expensive to set light to buildings, so fire training is a popular focus for VR training developers. One of VR Learning Studio's products involves the user discovering a fire in an office and having to show they know how to alert others to the danger and how to select the right extinguisher.

VR developer The Parallel has two fire training products -- one set in a petrol station, and one in an office. The VR scenarios expect the user to demonstrate their ability to diagnose the danger quickly and respond effectively -- making decisions about raising the alarm, evacuation and firefighting. The responses made by the user at each point can be reviewed by a training manager who can provide individual feedback. "Getting people to work through the physical movements they will need to carry out in an emergency promotes muscle memory," says The Parallel's business development manager, Ashton Kehinde. When there is a crisis, there isn't time to think through the options. Muscle memory enables people to respond more automatically. "A classroom or online experience explains what to do, but in VR you feel like you are actually doing it," adds Kehinde. 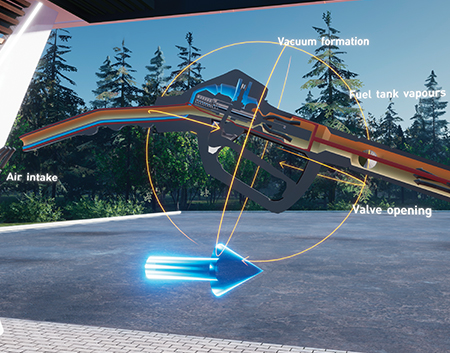 Sam Woodhouse, training services manager at Certified Skills, says: "There are many compelling studies showing the efficacy of VR enhancing behavioural change in corporate training scenarios." The company previously offered fire safety training using firefighters, "but we could see that using VR would enable learners in a classroom to experience live fire situations, putting the skills they have learned into practice straightaway, in a safe and immersive environment".

But VR is not just for emergency response training. Mark Whittle, founder and CEO of Virtual Reality Experiences (VRE), produced a VR simulation for a client to train people to carry out a routine process safely. The task, which involves selecting personal protective equipment and tools, drilling some holes and fitting a plate on a platform, is first demonstrated using the VR. The user is then guided, step-by-step, to make sure the process is followed. In the final step the user is tested on the same process, using the VR without guidance to make choices -- which PPE or tool to select, where to drill, which task to do next.

All choices can be recorded, but Whittle advises people to think carefully about what information they want to gather. "If you collected all the data you could, you'd never know what to do with it. Decide what your learning outcomes are and focus on collecting data to measure those."

Fecci agrees on the importance of learning outcomes: "We won't agree to a purchase order until we're sure the client is clear on the learning outcomes." Part of VR Learning Studio's offering includes a dashboard on which learning managers can view individual and team performance, just as you would expect from a good e-learning management system.

James Mansbridge, head of digital learning at the British Safety Council, worked with Fecci to create a VR experience for risk assessment. The VR user walks into a busy kitchen and can move around, look in cupboards, read checklists and even ask questions of the people working there (by selecting from a floating list of possible questions for each worker). The user is presented with a clipboard on which four predefined hazards are set out, and from observations and conversations must score the likelihood of harm arising from them and the potential severity. 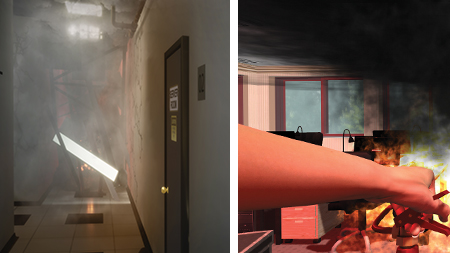 John Kersey, HSEQ business partner for facilities services company ISS UK, is convinced of the benefits and has been working with VR Learning Studio. "It is incredibly immersive in a way that many traditional means of training are not and trainees and managers (as promoters) are keen to engage," he says. He agrees with the benefits suggested by Young: "Our starting point was high-risk activities which would either be dangerous or very expensive to replicate, such as work at height."

Kersey is also adamant that immersion and engagement is only part of the story: "For us as a global company the ability to deliver high-grade training solutions at scale is another big advantage -- knowing it is consistent, can be delivered in different languages and that we can analyse user and training system performance is a winning combination."

Anglian Water is another convert and has appointed Steve Havvas as a dedicated VR programme manager. He is clear on the business benefits of adding VR to the utility company's training mix. "We'd like to put everyone on a safe-driving course," he says, "but in the real world it would cost upwards of £1m. Using VR, we can bring that cost down by about 80%. Similarly, to train 20 people to use a leak-noise correlator [an electronic detector for water or gas pipe leaks] would take us two or three days. In VR we could reduce that to a few hours with better monitoring of performance, enabling trainers to give better feedback." Anglian Water's VR programme, developed with Edg VR, will be rolled out to staff and contractors across the east of England this year. 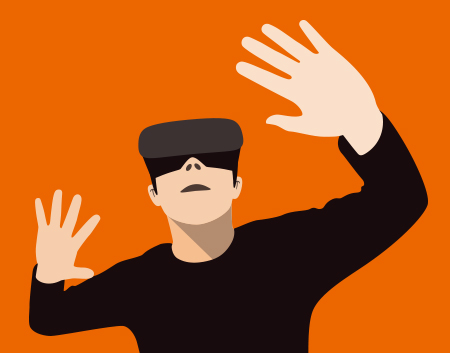 One drawback with VR lies in translating real-world movement into virtual movement. In most VR you pick up a drill, turn a handle or open a door by clicking on the object. Learning to use a fire extinguisher is not a realistic experience if you cannot feel the weight of the extinguisher, the resistance from the trigger and the heat of the fire. Ideally, the user wants to control the interaction with normal hand and body movements and receive physical feedback, so that it feels the same as touching the actual objects.

Haptic feedback uses sense of touch to simulate the weight of an object or the force needed to move a virtual object. The Teslasuit has been developed to give people this feedback, using transcutaneous electrical nerve stimulation (TENS) and electrical muscle stimulation. The Parallel has developed VR that works with the Teslasuit. Although not severe enough to cause pain, the full-body wearable gives the user a sense of the heat of the fire, of the sparks coming from a fuse box and the weight of an object. Kehinde sees this as a step forward, adding to "the immersive experience of VR".

To wear a Teslasuit for a few minutes of VR experience in a training day might not be practical, however. Haptic gloves are more convenient, but still bulky. Future solutions might monitor gestures with cameras and provide haptic feedback invisibly using ultrasound (bit.ly/2DFoxqB).

VR is still a young technology and is likely to become much more sophisticated in the years ahead. Imagine if you could talk to the characters in your VR scenario -- shouting "fire" and watching people run or having artificial intelligence chatbots responding to natural language questions. Mansbridge thinks that such virtual realities are possible and will be integrated into VR scenarios that will be "almost indistinguishable from the real world". 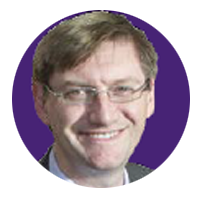 Kehinde suggests a further development, linking VR with wearable monitors: "The Parallel is looking at how monitoring brain wave activity of users in a VR experience could be useful -- for example, to see how people react to a fire, or how they concentrate in a driving task."

Motion sickness used to be a common drawback of VR when headsets were heavier, and frame rates slower. Good design and controlled periods of use will limit the effect for those who are susceptible but, as with any other activity, a risk assessment of its use should identify suitable controls. Some VR can be experienced sitting down, for example.

There are many options for using VR. Equipment can be hired in the short term to determine whether it provides a return on your investment. Although more expensive equipment provides a better experience, pilot studies using cheaper headsets and 360 filming can give boards the confidence to make a larger investment in VR.

Alternatively, when you're looking for a training company, see what they have to offer. Many British Safety Council courses will include their risk assessment VR course, even for those undertaking distance learning versions.

Woodhouse says Certified Skills is "on a mission to bring virtual reality to organisations of all sizes in the most simple and cost-effective way-¦ we bring the kit they need and a module tailored to their work environment. They get VR at cost comparative to a traditional fire safety course."

In the short term, expect to see more health and safety training companies developing VR. As the number of adopters grows, prices will fall. Most importantly, growth in demand will focus developers on the desired learning outcomes to create the most effective VR training.