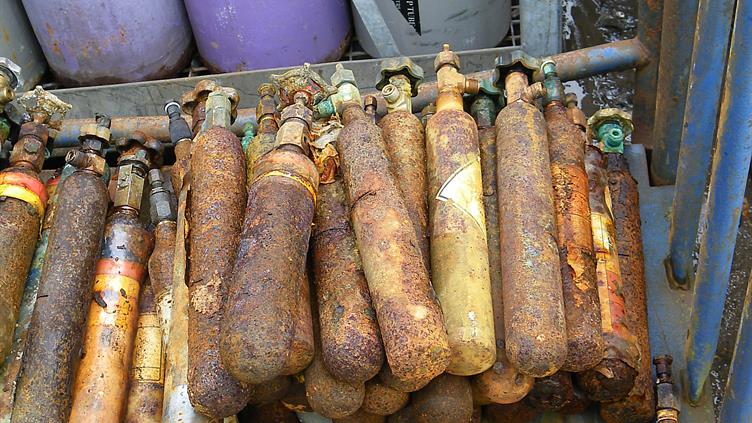 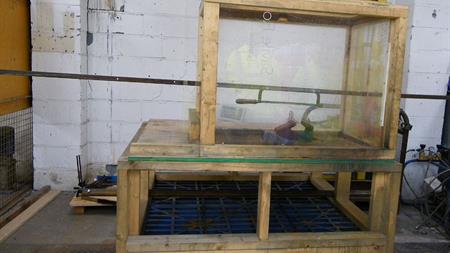 An Air Liquide (UK) emergency response team was disposing of redundant lecture bottles -- small compressed gas cylinders -- on 7 February 2015 after the company had failed to arrange for a specialist contractor to handle the job. Two workers were cutting open the bottles held in a purpose-built enclosure with a hacksaw operated from the outside.

A third, wearing a bomb disposal suit and respiratory protective equipment, was carrying one of the cylinders that had been cut open when about 50 ml of highly hazardous liquid spilled on to the floor.

Vapour from the spill drifted downwind and affected the breathing of the other two workers, one of whom collapsed. Neither was wearing respiratory apparatus.

They were taken to hospital but did not require treatment and were later discharged.

An investigation by the Health and Safety Executive (HSE) found that Air Liquide's emergency response team was not equipped to deal with the bottles' hazardous contents. The work had not been supervised and the company had failed to control the "very real" risk of explosion.

Craig Morris, prosecuting, was reported by local newspaper The Sentinel as saying: "About 50 different substances were potentially contained within the bottles [-¦] It is puzzling to the prosecution how they have stepped so far away from the basic industry guide."

Judge Paul Glenn accepted that the company's system for removing legacy bottles was safe before workers stopped using breathing apparatus, but said cutting through the bottles was like "Russian roulette" since the workers did not know what was inside them.

HSE inspector Matthew Lea said the employer's duty to devise safe systems of work and train workers in them "started with understanding the hazardous properties of the chemicals likely to have been present in the bottles they were required to handle".

"Their failures put the lives of their workers at significant risk," he added.