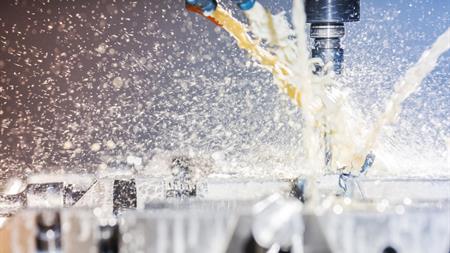 Aylesbury Crown Court was told that three computer numeric control (CNC) machine operators employed by Martin Baker were exposed to metalworking fluid for many years and developed a lung disease known as extrinsic allergic alveolitis (EAA) -- an allergic reaction to breathing in mist and vapour from the fluid. Symptoms of the disease include coughing, shortness of breath and joint pain.

The workers programmed and minded the automated machines making small ejector seat components. The fluid lubricated and cooled the machines, and washed away swarf and fine metal particles.

An investigation by the Health and Safety Executive (HSE) in December 2013 found that Martin Baker failed to reduce workers' exposure to metalworking fluid. It had no system to remove the excess fluid and to prevent a build-up of mist.

The risk assessment was written by two of the factory's foremen and was not fit under the Control of Substances Hazardous to Health (COSHH) Regulations.

The risks of EAA and occupational asthma from metalworking fluid exposure are well known. In 2006 more than 100 workers were diagnosed with the conditions after uncontrolled fluid exposure at automotive manufacturer Powertrain's Birmingham factory. It is believed to be the largest recorded outbreak of respiratory disease linked to metalworking processes.

HSE inspector Stephen Faulkner told IOSH Magazine: "For something as complex as this -- especially when looking to develop reasonable and practicable controls -- you need an occupational hygienist to at least support you, if not carry it out. One of [the foremen] didn't know there was a respiratory health effect associated with metalworking fluids and yet he carried out the assessment. It was completely inadequate."

Although the CNC machines were enclosed, they were not fitted with interlock switches that would have provided a time delay after machine switch-off. There was no extraction system and when a worker opened the door, fluid mist and vapour created during machining was released in to the workroom and inhaled.

Workers used a high-impact air blow-off system to clean the excess metalworking fluid left on each new metal component, a technique that the HSE considers poor practice, said Faulkner: "Since 2006, our guidance has stated that you shouldn't really do that. There's not an absolute prohibition on it but it's poor practice as it creates an exposure risk. The operator holds the work piece in his hand and sprays each component with air from an air gun, blowing it up into his breathing zone."

The CNC operators also worked close to some manual machines where monitoring of the quality of the metal working fluids was not carried out, which also could have contributed to the workers developing EAA. The HSE found that when Martin Baker eventually monitored the fluids the bacterial counts in some of the machines was "unacceptably high", Faulkner said.

However, the inspector stated that the employees who worked on the manual machines and were exposed to high levels of contaminated metalworking fluids have not contracted any respiratory illnesses.

"The key message is that it's not just about carrying out the health surveillance; it's about analysing and acting on the results."

One of the victims, all of whom had worked at the company for more than 20 years, has become almost paralysed by the illness and needs an oxygen tank to be able to walk.

Martin Baker pleaded guilty to breaching s 2(1) of the Health and Safety at Work Act and reg 6(1) of the COSHH Regulations as it exposed its employees to hazardous substances without carrying out a suitable and sufficient risk assessment.

Judge Francis Sheridan said that under the sentencing guidelines the company's culpability was high, the seriousness of harm risked was level B, and the likelihood of harm occurring was high. The starting point for the fine was £1.2m, reduced by a third for the early guilty plea. The company was ordered to pay costs amounting to almost £37,000.

"Martin Baker is setting the standard for industry now that everyone else ought to follow," Faulkner said. "They are a good company and they have spent a huge amount of money researching better control measures. The tragedy is they didn't do it ten years ago to prevent these people from becoming ill."

The company is also facing prosecution over the death of a Red Arrows pilot who was propelled 67 m into the air when his ejector seat accidentally fired.