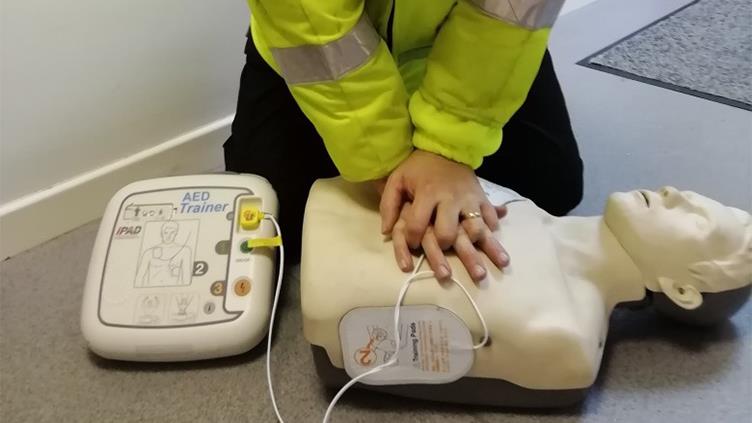 Community first responders are volunteers who work for the ambulance service and attend the highest-priority emergency calls, such as cardiac arrests, heart attacks, strokes, choking incidents and diabetic emergencies. If you phone 999 because someone is not conscious or breathing, the call handler might inform a nearby community first responder that a job has come in. The responder then calls to find out the details. It might be: "There's a patient in cardiac arrest three miles from you -- can you attend?" Then you jump in your car and go. The call handler will also allocate a paramedic but, if the nearest ambulance is, say, ten miles away, they'll allocate a first responder who can get there more quickly and help until the paramedic arrives.

First responders provide basic life support, that's what I'm trained to do. You have to go through a police check, and to be able to drive and have a car. You then go through training and selection.

First responders are a resource for the ambulance service. If a patient has been in cardiac arrest for eight minutes, there is little chance of reviving them. If we can provide help more quickly, we can save lives. We do the ABC checks -- airways, breathing, circulation -- and we carry defibrillators and oxygen. It's about early intervention. What we don't do is attend car crashes -- we aren't allowed to do major trauma calls. 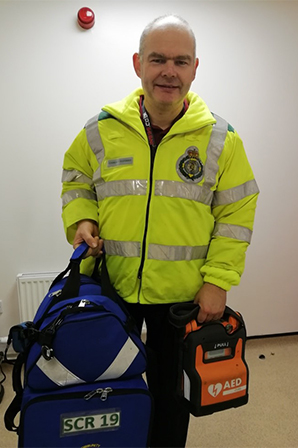 I've always enjoyed volunteering and using my skills to put something back. As community first responders we also raise funds, and we've raised money to put defibrillators into the local area.

We've worked with various organisations, including the Women's Institute and the Royal British Legion, and there's probably now a defibrillator within half a mile in 80% of built-up areas. We hold events and offer basic training on using the kit: if you've got an idea what to do, it's less frightening if you ever have to use one.

It takes a particular sort of person: you need to be sensitive and professional. It can be very high-pressure work and you have to be able to think clearly. You might be trying to bring back to life someone in cardiac arrest, with distressed family members nearby.

You have to be a good communicator. On some jobs, such as when someone has had a fall, there's not much you can do until the ambulance arrives, so you just have to offer reassurance. Occasionally, you work with the paramedics: if you're following their instructions, you can go beyond your training.

Sometimes people become violent or aggressive, and you can see things that are upsetting or traumatic. I'm fortunate that I had 19 years with the police.

You might be trying to bring back to life someone in cardiac arrest, with distressed family members nearby

One of my best experiences was a call to a 28-year-old unconscious male. I got there in four minutes and found him unresponsive on the floor, with his mother on the phone to the ambulance service. I did the ABC checks and as soon as I tilted his head I heard a gasp and he started breathing. By the time the paramedics arrived he was sitting up and on oxygen, and he was able to walk to the ambulance. If I hadn't reached him so quickly, the outcome might have been different.

At work I carry out risk assessments and write procedures, and I've brought those skills into my first responder role. I'm scheme co-ordinator for my area and, just as in my day job, I induct recruits. I talk to them about the risks of going into people's houses and the importance of thinking about your own safety and the safety of those around you.

I have my "health and safety head" on all the time. In a diabetic emergency I attended, a family member had smashed a window to gain access to the house so there was broken glass to avoid. Often there'll be steps to negotiate in the dark, sometimes with a patient on a stretcher.

I volunteer between ten and 15 hours a week. The number of calls varies and tends to be more in winter because of falls. I might attend two a week, but where I am is very rural; in a city, you might get 20 or 30. I have a lot of pressure in my day job but being a first responder is a different mindset: I can detach from the stress of my work -- I don't have to worry about who is following procedures -- and I get so much fulfilment from it.