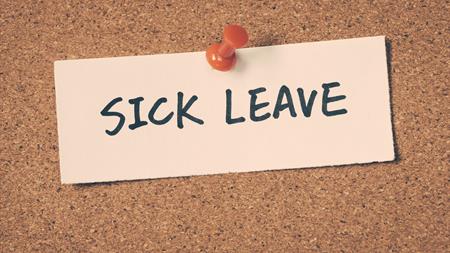 Employees took an average 5.2 days off sick in 2016, compared with 5.3 days the previous year.

This is the equivalent to 2.3% of working time, which remained unchanged from the previous year and continues a theme of stability in the absence statistics since 2010, the sickness absence benchmark report says.

Though the number of days lost to absence declined for both manual and non-manual workers, manual workers had higher rates of sick leave -- an average of 6.1 days compared with 3.1 days for those in white-collar jobs.

Figures show that the smallest companies had the least absence. Firms with fewer than 50 employees had a 1.8% absence rate last year (down from 1.9% in 2015). Those with a workforce between of 51 and 100 reported a 2.2% absence rate.

Terry Woolmer, EEF head of health and safety policy, said: "Employers recognise the critical importance of keeping sickness absence levels to a minimum. Staff morale, productivity and business costs can all be impacted if the amount of time lost to sickness isn't effectively managed.

"The positive news is that our annual benchmarking analysis shows that manufacturers are doing just that, with the absence rate and average days lost of absence remaining stable in recent years. Companies should, however, keep their own performance under review and our research allows manufacturers to see how they stand against the industry average."

The benchmark report is based on data from EEF's annual sickness absence survey, which will be published in July. It covers 22 organisations employing excess of 46,000 staff.