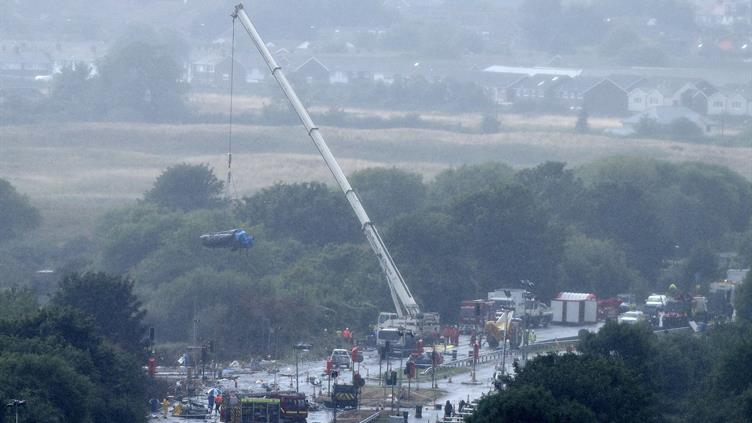 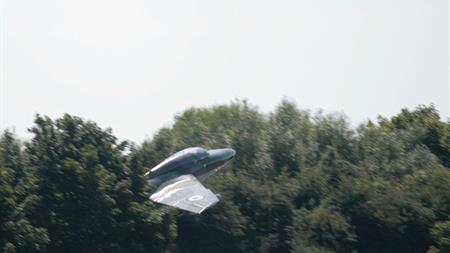 Pilot Andy Hill flew a Hawker Hunter (G-BXFI) ex-military jet too low and too slowly during a loop-the-loop stunt on 22 August 2015. The aircraft failed to level out after the manoeuvre and crashed into the A27 road's westbound carriageway. Eleven people were fatally injured and a further 13 people were hurt, including Hill. The aircraft was destroyed.

During its 18-month inquiry, the Air Accidents Investigation Branch (AAIB) found there were conflicting views over who was responsible for the safety of the display and the onlookers.

The Civil Aviation Authority (CAA) believed the organisers of Shoreham Airshow owned the risk, while the organisers said the CAA was the "gatekeeper" of all safety and risk management relating to air displays. They believed that the authority would not have issued a permission for the display if it had not been satisfied with the safety of the event and that it would intervene if it believed that arrangements were not satisfactory.

The 220-page final report into the disaster said: "No organisation or individual considered all the hazards associated with the aircraft's display, what could go wrong, who might be affected and what could be done to mitigate the risks to a level that was both tolerable and as low as reasonably practicable.

"Controls intended to protect the public from the hazards of displaying aircraft were ineffective."

Shoreham Airshow's flying display director (FDD) carried out a risk assessment for the display, which listed ten hazards, including public assembly on the A27 and local roads, aircraft crash outside the airfield boundary, and fast jet aircraft collision into the crowd area.

The AAIB commissioned a review by the Health and Safety Laboratory (HSL) of the risk assessment for the 2015 Shoreham Airshow, which found it did not fully comply with CAP 403.

The HSL concluded that the risk assessment "contained a number of deficiencies compared to what would be expected for a risk assessment to control risks to the public" and it was "not fit for the purpose of identifying and mitigating the risks and hazards to the public from the air display activities of the air show".

The AAIB then commissioned a further HSL study to consider the risk assessment guidance under CAP 403. The HSL recommended that information should be added to the guidance to help show organisers identify and control the risks from flying displays.

The report said: "CAP 403 is potentially misleading in the area of risk mitigation. This is a significant area that needs to be improved as failing to properly assess the mitigation measures could lead to inappropriate or unachievable measures being put in place that do not control or reduce the risks.

"The tolerability of risk criteria should be reviewed as some high consequence events are deemed 'tolerable' for relatively frequent likelihoods."

On 24 January the CAA said it would review the HSL's findings and publish "any updated guidance" by April.

The CAA's air show inspection process was criticised in the report. The AAIB found that it visited just eight (2.8%) of the 281 displays it permitted the year prior to the accident. In 2015 officials attended 18 of the 254 displays (7%). This included six displays after the crash, some of which were attended by non-specialist staff.

In contrast, the report said that the Federal Aviation Administration in the US attended every authorised display.

The AAIB said: "The CAA had no means of determining the safety of flying displays other than by attending them."

The report said that the Hawker Hunter jet pilot was flying at approximately 56 m and 575 kmh when he pitched up into the fatal loop, rather than the required 152 m and 644 kmh. The aircraft reached 823 m at the top of the manoeuvre, although 1,067 m was needed to be able to pull out safely. As it descended, it accelerated and the nose was raised but insufficient height was available to recover to level flight before it hit into the westbound carriageway.

Investigators found that Hill had not received formal training to escape from the accident manoeuvre in a Hunter Hawker, nor had he practised the escape technique in that particular aircraft. They also found the measures in place to mitigate the hazard of aircraft crashing outside the airfield boundary were not effective.

The AAIB recommended that all pilots conducting aerobatics at flying displays are trained to ensure they can abort poorly executed manoeuvres, and that displaying aircraft are kept a "sufficient distance" away from crowds to reduce the risk of injury to the public in the event of a crash.

It also recommended the CAA prohibit the use of phenolic asbestos drop tanks on civil registered aircraft. Phenolic asbestos used to make the underwing drop tanks on the Hawker Hunter scattered over a large area after the crash, however the material was not identified until a week later and emergency services personnel and others were exposed to the hazard.

During its investigation, the AAIB learnt that materials other than asbestos are available for making underwing drop tanks.

The AAIB's final report has been handed over to Sussex Police, who are investigating the pilot for manslaughter.

Detective chief inspector Paul Rymarz said: "We hope to do everything we can to submit a file of material to the CPS [Crown Prosecution Service] in advance of the pre-inquest review on June 20."