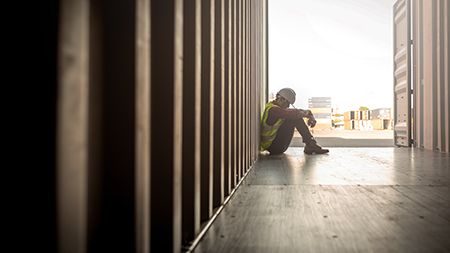 Released to coincide with yesterday's World Mental Health Day, the study carried out on behalf of UK Construction Week, found that more than half of people in the construction industry have suffered mental health problems at one point in their lives, most often stemming from financial issues (45%), long hours (41%) and the physical strain of the job (41%). Despite this, only four out of ten (44%) have spoken out about it at work -- and this figure rises to 71% for those aged over 55.

More than a third of respondents (37%) admitted that they had taken time off at work due to their mental health, with only 64% of those telling their employer the reason why. The problem is particularly acute among the 18-34 age group.

When asked who they would turn to if they were to experience any mental health issues, most construction professionals felt they would be most comfortable talking to a dedicated mental healthcare professional (30%), followed by someone who they get on well with at work (27%). A chat with a friend is considered the most effective mood-booster for a bad day at work, according to respondents (50%), followed by music (46%), exercise (38%) and food (32%).

However, more than half of all respondents (56%) felt there was more their organisations could be doing to support the mental health of workers. Of the support services that they thought would be most beneficial, top of the list was free counselling (39%) or flexible working (39%), followed by a dedicated trained person to speak to (35%), an on-site quiet space (27%), and an anonymous helpline (24%).

Full details of the research can be found here.