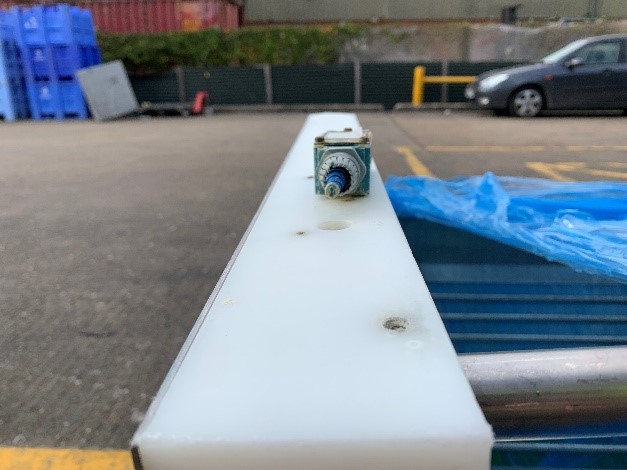 One of the machine's two interlocks

A Kent-based food production company has been fined £858,000 after a 26-year-old employee had to have his right arm surgically removed following an incident.

Lee Simpson was removing filling ingredients from a paddle mixer at David Wood Baking Limited’s site in Sheerness on 27 September 2021 when his arm became entangled in the unguarded machinery.

The Health and Safety Executive (HSE) attended the food production company’s site at Mill House, Dorset Road in Sheerness and found that the control measures to prevent contact with moving parts were ineffective.

Specifically, the guarding on the paddle mixer, which is used to make sausages rolls, quiches and other food products, was not routinely replaced after cleaning.

On the day of the incident, Simpson was removing filling ingredients from the front of the unguarded machinery when his right hand and arm were drawn in.

Significantly, the ‘interlocking’ system had been defeated which meant that the food mixer could still operate even though the front guard was not in place.

The HSE concluded this system had been defeated from January 2019, but possible as early as 2018 when the food mixer was first installed.

This failure meant all of the employees that worked with the machinery had been put at risk when they operated it. The HSE told IOSH Magazine that its investigation found at least ten factory staff worked with the food mixer.

However, closed circuit TV footage revealed that many employees, including managers and supervisors had used or seen the machine over the six weeks prior to the incident when the guard was not in place to prevent access. Not one person had taken any action or raised it as an issue.

The HSE said that the guard was designed to allow the machine to operate only when a tote bin was placed underneath it.

David Wood Baking Limited should have made sure that the interlocking system was maintained and remained in working order, the HSE reported. Had this been done, it would have been impossible to use the industrial food mixer when there wasn’t a guard in place.

David Wood Baking Limited pleaded guilty to breaching regulation 11 (1) (b) under the Provision and Use of Work Equipment Regulations 1998 at Folkestone Magistrates Court on 21 December 2022. In addition to the £858,000 fine, the business must also pay £8,000 in costs.

‘Every year, a significant proportion of accidents, many of them serious and sometimes fatal, occur as a result of poorly guarded work equipment. To prevent and reduce the risk of serious or fatal injury adequate arrangements and systems of work are required.’

Williams added that machinery and plant accounts for more than 30% of fatal injuries and more than 10% of major injuries in the food and drink sector.

Since the incident, the HSE says the company has made improvements to its risk assessment process and its monitoring procedures. It has also provided staff training.