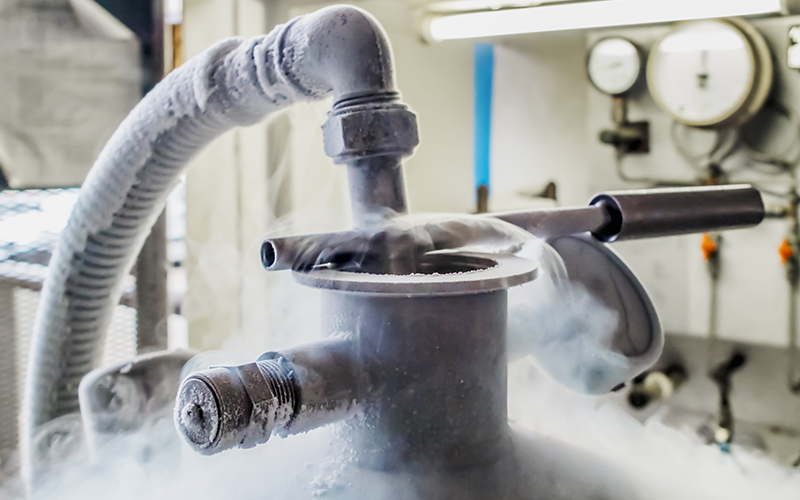 A director who had installed a cryotherapy chamber was unfairly dismissed, a tribunal has ruled, because the technical director and principal health and safety officer at the business failed to raise concerns about the work undertaken.

The cryotherapy chamber, which was manufactured and checked in Poland and had been installed at a client’s site in Glasgow on 31 January 2020, was subsequently found to be faulty and had leaked harmful gases.

The claim, which was heard by video, was brought by David Morris, one of two directors and joint shareholders with Ian Saunders, who had set up CryoAction in August 2015 to provide 'cryotherapy equipment, principally cryotheraphy chambers, to sports teams, spa and wellness facilities, gyms and specialist cryotherapy clinics'.

The tribunal heard that, initially, the business sold and distributed cryotherapy chambers manufactured by Polish company, Creator Sp.z.o.o. In 2018, however, the business set up its own Polish subsidiary, CryoAction Sp.z.o.o, which manufactured the cryotherapy units that CryoAction sold. Subsequently, Cryoserve, another subsidiary, based in the UK, was set up to provide servicing and maintenance work.

The installation process for the cryotherapy chambers that CryoAction sold varied depending on whether they were being built inside a client’s building or installed externally, the tribunal heard.

In the former’s case, the chamber’s components would be delivered to the site as a “flat pack” and, from 2018, assembled by Cryoserve engineers. In the latter’s case, the Polish subsidiary would pre-build the chamber and connect it up on-site.

The tribunal heard that Shaun Turton, who would subsequently join Cryoserve as its technical director and principal health and safety officer in 2019, worked for BOC during this period and often attended to undertake this part of the installation.

As well as the pipes and associated valves, the system in later years also required the use of an 'actuator', which 'operated as a form of safety valve' and needed to be connected to an electrical supply by a 'simple' two-wire connection. The tribunal heard that 'liquid nitrogen is dangerous as it expands, and consequently displaces oxygen, leading to the risk of asphyxiation'. The purpose of the actuator is to ensure the supply of liquid nitrogen from the tank to the chamber automatically cuts off in the event of a fault.

Before Turton’s appointment, Morris and, on occasions, Saunders undertook some of the technical or “hands on work” relating to the installation and repair of chambers. This included replacing oxygen and temperature sensors, and, in Morris’s case, wiring the actuator. Other tasks included repairing leaks and clearing debris from the valves.

In June 2019, the business produced an “Installation Protocols” document that focused mainly on the longer 'flat pack' type installation and did not directly cover the “drop in” installation type worked on by Morris in the Glasgow incident, the tribunal heard.

The document also stated that most of the installations should be allocated to a technical group, with many specifically allocated to Turton. Significantly, minutes taken from a meeting held on 19 December 2019 reveal that no reference was made to 'any restrictions on the work' that Morris could undertake.

The tribunal heard that in January 2020, Morris 'negotiated the sale of a new chamber to an existing client, Cryolabs', which involved the installation of a 'drop in' unit at its Glasgow premises. Manufactured and tested in Poland, the chamber was due to be delivered on 10 January.

After its delivery, Thames Cryogenics Limited (TCL), an external company, installed the pipes and valves, so that 'liquid nitrogen from a tank situated just outside the client’s premises could flow into the internally-sited chamber', and this was completed around 24 January. As a final action, the actuator had to be wired up and system tested. This encompassed both the liquid nitrogen supply from the external tank and the chamber’s operation.

On 17 January, Morris contacted Turton to ask him whether he was available to complete the installation later that month but the technical director and principal health and safety officer did not have any availability; the tribunal heard he was 'moving house towards the end of January'.

The tribunal also heard that the commissioning of the Glasgow unit was dependent on BOC filling the external tank with liquid nitrogen, which was arranged for 31 January. As Turton couldn’t attend, Morris did.

Judge Jenkins noted in the published transcript of the hearing that Turton had, by this stage, been confirmed as the company’s principal health and safety officer, with day-to-day responsibility for health and safety matters. He added that Turton 'did not seem to be a person who would be slow to point out when things were wrong'. Had he had any concerns about Morris undertaking the work he 'would have said so'.

The tribunal was told that on 31 January, Morris had messaged Turton and engineers in Poland requesting assistance regarding the chamber’s operation; the exchanges confirmed that the 'claimant was less familiar with the [CryoDuo] chamber', which was the first of its type to be manufactured and installed. It was also not a chamber that he had previously seen nor worked on.

Despite his need for assistance, Morris did connect the chamber and tested it and it operated well that afternoon. He then provided training for the Cryolabs lab staff on how to operate the chamber.

On 17 February, CryoAction was alerted by BOC that its operator had gone to refill the liquid nitrogen tank at the Glasgow site and noticed a discharge of gas from a pipe in the chamber room.

The tribunal was informed about a photograph of a red lever that Morris had moved into the bypass position. This meant the valve would not close to prevent the flow of liquid nitrogen if a fault arose. The respondent said this photograph was a 'crucial piece of evidence' in its decision to dismiss Morris.

Following a business trip, Saunders decided on 26 February that the issue was serious and needed to be 'investigated from a disciplinary perspective'. While the claimant was on annual leave from 2-11 March, Saunders removed Morris’s access from company systems and its offices by changing the locks.

Morris received a letter, dated 5 March, informing him he had been 'suspended until further notice, pending an investigation for gross misconduct'. Five numbered points were listed in relation to the events of 31 January, which Morris faced throughout the disciplinary process and for which he was dismissed (see box below).

The claimant was informed that a disciplinary hearing would take place on 23 April, which was subsequently reconvened.  At this subsequent hearing, Morris was informed he had been found guilty of gross misconduct with the 'appropriate sanction being summary dismissal'. The claimant was 'dismissed with immediate effect, without any period of notice or payment in lieu of notice'.

Judge Jenkins concluded that Coaction’s dismissal for gross misconduct was 'unreasonable in the circumstances'. He was not guilty of gross misconduct, and was entitled to have received three months’ notice of the termination of his employment.

The judge added that Morris had sought telephone assistance from Turton who 'did not, at any stage, indicate any concern about the claimant doing the work'.

Morris was awarded damages for wrongful and unfair dismissal. However, the claimant’s compensatory award was reduced 'to reflect that the conclusion that his employment would have ended fairly, in any event, by the end of a further period of six months'.

1. David Morris attempted to install CryoAction cryotherapy equipment, even though he was not a qualified engineer or deemed competent to do so, contrary to agreed company rules/processes and health and safety guidance without the support of a company qualified engineer.

3. Then remedied the issue with the compressor through the telephone support of the manufacturer subsequently failing to remove the bypass. Subsequently and unconnected, a pipe supplying liquid nitrogen to the apparatus, fractured inside the client’s premises. The safety system within the apparatus detected the leak as the oxygen levels inside the area affected had fallen dangerously less than agreed safety levels. As a result, the system sounded an audible alarm, also displaying a visual alarm on the control panel. Ordinarily, the alarm would have triggered an automatic shutdown of the liquid nitrogen supply. However, as Morris had bypassed the shut off system, the supply continued unabated.

4. Had this situation occurred overnight or at a weekend, there was a real possibility that the continued supply would have led to a reduction in oxygen levels within the client building, creating an oxygen-deprived environment that could have resulted in a serious risk to life for anyone entering the building.

5. By his deliberate actions, which breached agreed company rules and process, contravened health and safety guidance, Morris not only placed others at serious risk to life but acted in a way that placed the company and its directors at significant risk of prosecution, fines and in the case of directors of imprisonment. His deliberate actions could have not only resulted in fatalities but could have also had serious consequences for the company in damaging its reputation beyond repair.