Beating the heat at work 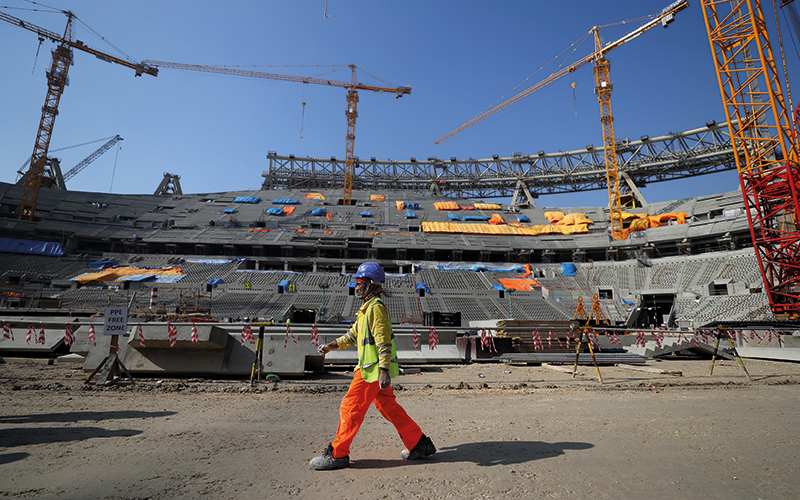 With temperatures soaring and extreme weather events on the increase, how should business adapt to climate change in the workplace?

The World Cup in Qatar this November follows a summer of soaring temperatures globally and persistent concerns about the impact of heat stress. Ever since its successful bid in 2010 to host the tournament, Qatar has faced international scrutiny regarding the work-related impacts of heat stress among workers, as well as the under-reporting or misreporting of worker fatalities.

Last year, Qatar adopted new rules, supported by the International Labour Organization (ILO), to provide further protection to workers from heat stress, including a ban on working outdoors in summer during the hottest times of the day – the hours of which have been extended from 3.5 to 5.5 this year (ILO, 2021). Saudi Arabia has followed suit (World Gulf, 2021). And in March this year, the International Trade Union Confederation reported major advances in Qatari labour reform to extend worker protection beyond 2022 (ITUC, 2022).

Legislative changes from the Qatari government and ILO regulations regarding heat are ‘a massive step forward,’ says Dr Iván Williams Jiménez, IOSH policy development manager. ‘However, a safe working temperature regulatory threshold must continue to be part of a more robust system that prioritises occupational health for workers.’

In the past two years, there have been massive bush fires in Australia, wildfires engulfing California, and rising seas, floods and intensifying cyclones in Bangladesh. Recently, in Pakistan, monsoon rains caused devastating floods, leaving millions homeless, while record-breaking heatwaves, severe drought and deadly rainfall have wreaked havoc in China. ‘OSH must improve and be enforced to deal with the effects of climate change, including heat stress,’ says Iván. ‘As a result we should increasingly see climate-related issues and risks such as extreme heat being taken seriously by regulators.’

The EU is introducing changes to legislation on safe working temperatures, with countries such as Spain and Germany already having maximum working temperature restrictions. EU lawmakers and governments are being called to urgently adapt and enforce workplace temperature limits. And in the US, the Biden administration committed to a national heat standard to protect workers from heat stress (White House, 2021).

‘Workers, employers and the public need to be further educated as heatwaves like the recent one in the UK are likely to become more frequent,’ says Iván.

Weather extremes are also impacting on people’s health and safety at work. Dr Barry Levy, co-editor of the 2015 book Climate change and public health, and an adjunct professor of public health at Tufts University School of Medicine in Massachusetts, says people working in abnormally high temperatures can die of heat stroke and other heat-related diseases. ‘People with chronic conditions such as heart disease and diabetes, if excessively exposed to heat, are at increased risk of complications and even death.’ Global warming is increasing ozone concentrations, exacerbating conditions such as chronic obstructive pulmonary disease and asthma (Rice et al, 2014). Meanwhile, flooding means people are at risk of malaria from increased mosquito breeding and waterborne disease from contaminated drinking water, says Barry. 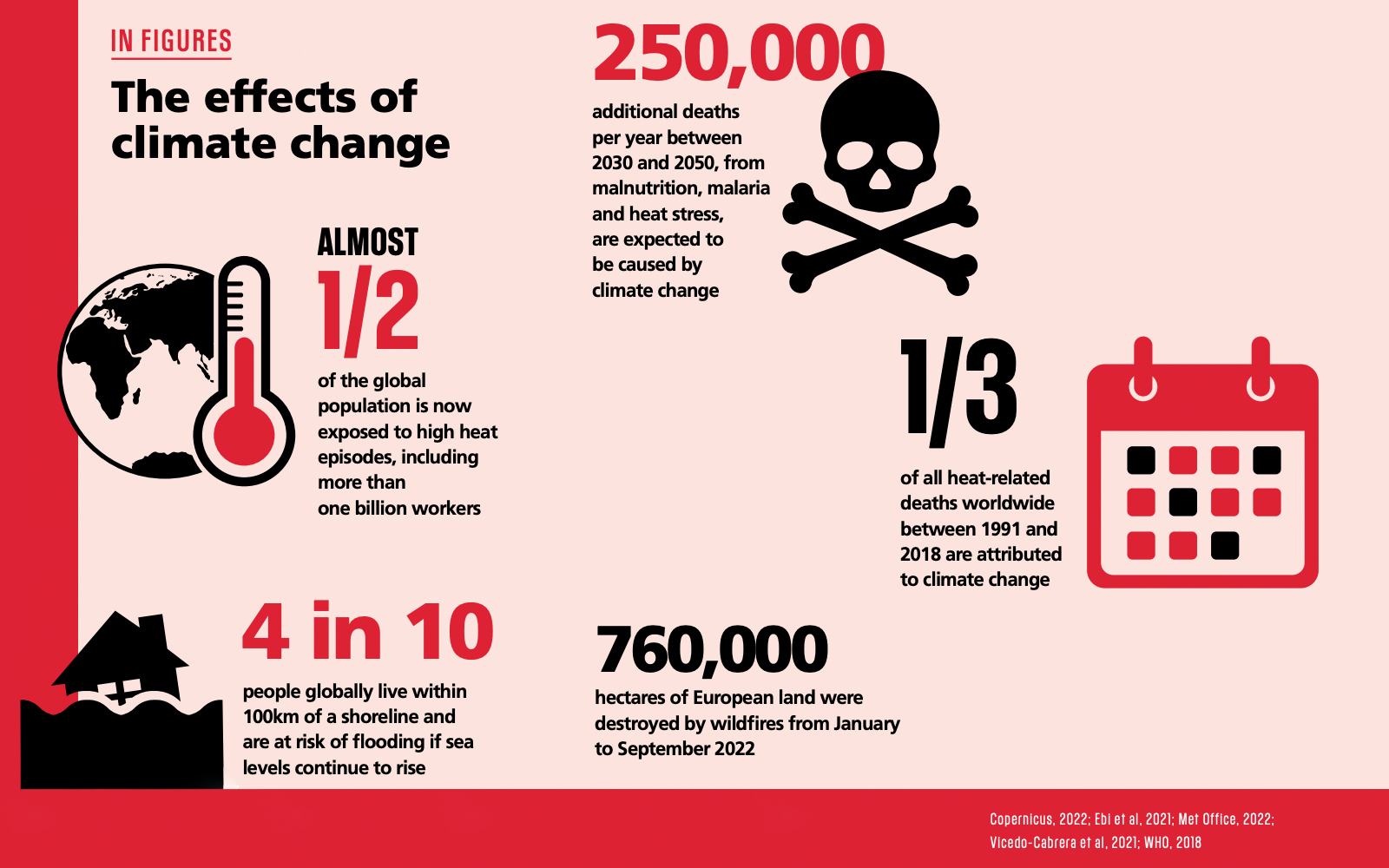 While climate change is affecting most workers, some sectors are particularly hard hit (see Climate change: industry impacts, below). ‘Most people in the construction industry work outside, where heat stress is a recognised occupational hazard,’ says Nathanael Challacombe CMIOSH, group health, safety, quality and environmental manager at Barnwood Ltd in the UK. ‘The attention that OSH professionals in the UK are giving heat stress is growing.’ 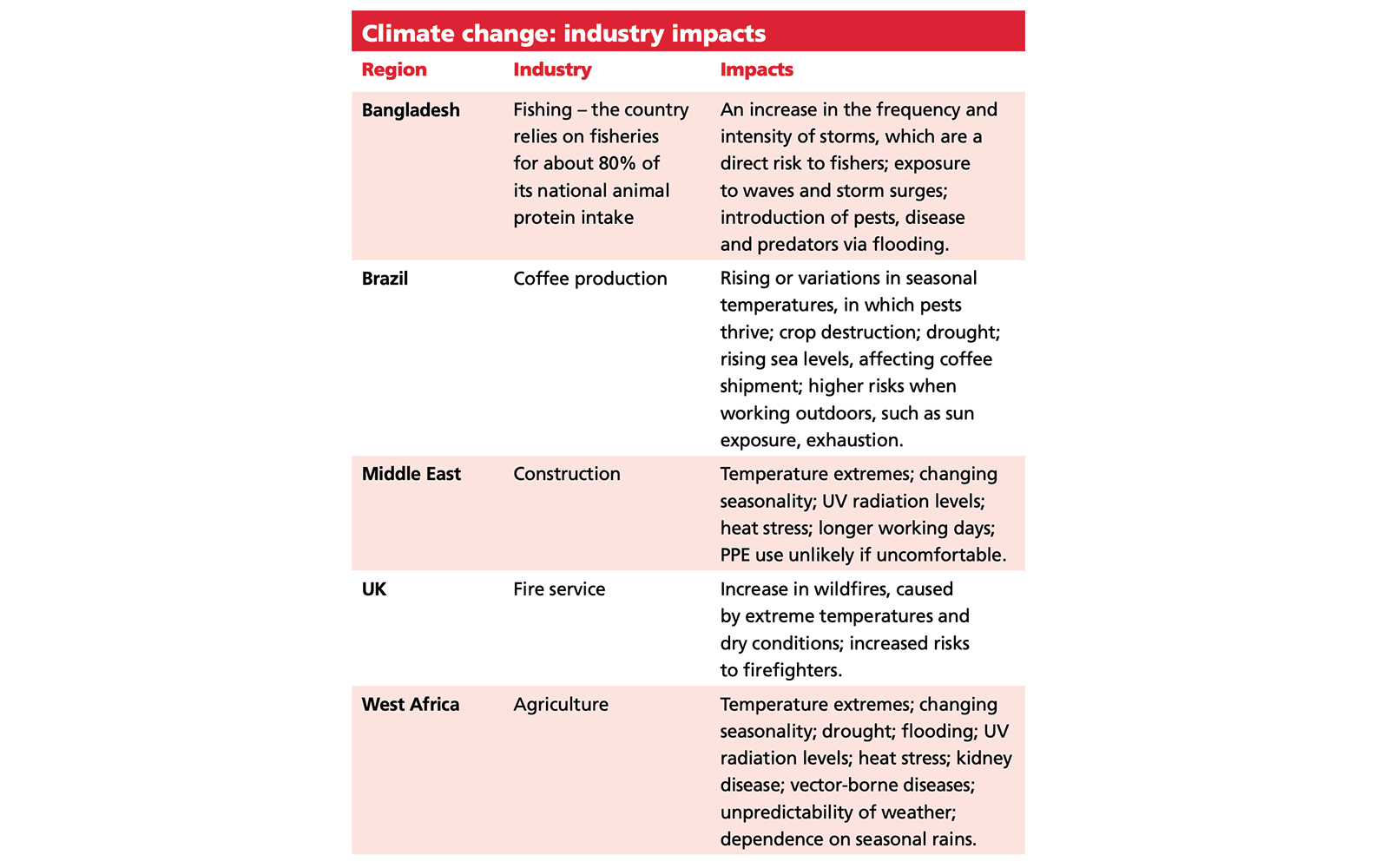 Farmers are among those workers at the highest risk of developing skin cancer because they are exposed to the sun daily (EU-OSHA, 2021). And employees who are exposed to hot indoor work environments such as steel mills, dry cleaners, manufacturing facilities, warehouses and other areas lacking air conditioning are also at risk of climate change-related factors such as extreme heat exposure or indoor air pollutants, the US Environmental Protection Agency warns (EPA, 2016). The growth of the online platform economy means ‘special attention also needs to be paid to delivery workers’, Iván says.

Meanwhile, emergency workers ‘risk not just their lives but their health, [their] injuries are often not reported, and who can be exposed to smoke inhalation from wildfires, for example,’ says Tord Kjellstrom, retired professor of environmental and occupational health, University of Auckland, New Zealand, and Australian National University, and leader of the climate health impact research team in Nelson, New Zealand.

The poor are the most likely to be affected by climate change. ‘They are the ones who carry out heavy labour in hot conditions,’ says Tord. ‘The harder the labour, the more dangerous is the heat. Casual and migrant workers can also be at particular risk as [in some countries] OSH legislation does not apply to them, or is not implemented, and often nobody keeps statistics on the impacts on them.’

‘Vulnerable disadvantaged workers, such as seasonal migrant workers, must be afforded greater OSH protection,’ Iván adds. ‘This needs to be extended to more effective risk assessments and management systems that should consider high-risk workers and include a gender-sensitive approach to OSH.’

These sectors could also provide insights about climate change risks and the necessary preventive measures for workers. ‘Much information is already available to OSH professionals about the health risks of climate change and how they can be minimised,’ says Dr Barry Levy. ‘OSH professionals should be proactive about sharing this information with employers and workers, especially highly vulnerable workers.’ He adds: ‘OSH professionals have a responsibility to treat workers who are affected by climate-related health problems. They also have a responsibility to raise awareness about and prevent these problems, and to advocate for policies and programmes to better protect workers and the general public.’ 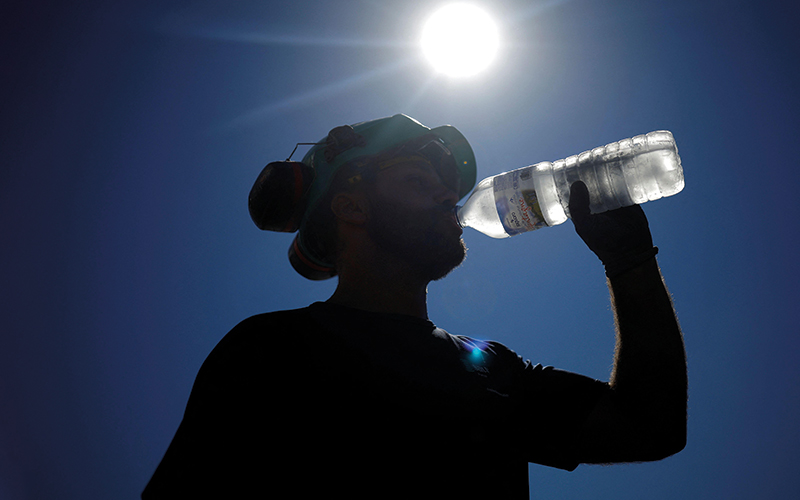 OSH professionals can also learn from countries such as Qatar, Saudi Arabia and Abu Dhabi, which are experiencing extreme weather events. ‘It’s about collaboration with OSH practitioners, because these are countries whose risk assessment processes for extremes have been fully developed, and we can take a lot of learning about what works well and what doesn’t,’ says Nathanael.

We can’t wait until the next heatwave or flood. The time for action is now

Iván Williams Jiménez says: ‘This collective effort is important considering the major projects that countries such as Qatar, Saudi Arabia and Abu Dhabi are embarked on, and how employers are becoming more aware of the legal and reputational consequences of workplace injuries and fatalities.’ From an OSH perspective, he says, ‘it is important to not limit the conversation to just heat exposure. Other factors also need to be considered, such as humidity, ventilation and sun protection.’

‘A preventive and protective response by employers is crucial for tackling this issue,’ says Iván. ‘Simply put, we need to see climate change issues within risk assessments and management approaches. OSH professionals can be instrumental in promoting adaptation strategies, preparedness planning, evaluation, and control strategies of climate change-related occupational hazards.’

To protect employees and communities, ‘companies have a responsibility to adapt to climate change,’ says Vicky Sins. They could consider ‘strategies for developing financial, technological and human capacity for adaptation’. ‘Some of the capacity-building activities companies can adopt include research and development into adaptation, incorporating adaptation into investment decision-making, and training employees on climate risks.’

Recognising the impact of climate change – such as the danger of UV rays among the construction workforce – may require a change in culture, says Nathanael. ‘It is vital we communicate with employees about the decisions we are making and why we are making them, sharing our carbon impacts and goals, and making it an open conversation. Leadership needs to listen to employees.’

Iván points out that many of us still see climate change issues and risks as one-off incidents outside the scope of existing OSH standards and frameworks. ‘This short-sighted approach needs to change and strategies shift in line with wider climate change adaptation policies,’ he says. ‘A joint effort will be needed – from regulators and public health surveillance systems, to employers. We will also need to integrate OSH into long-term planning, systems and practices.’

‘We can’t wait until the next heatwave or flood. The time for action is now.’ 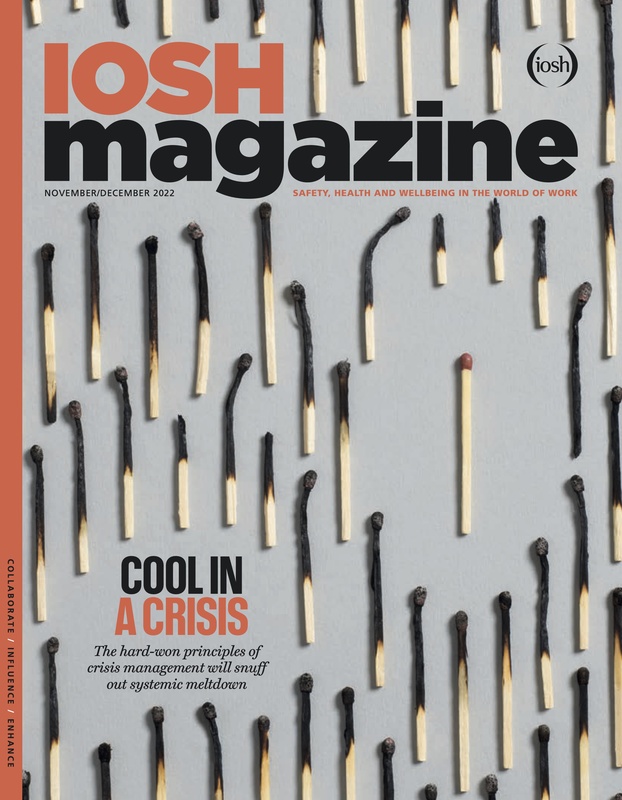 This article appeared in our November/December 2022 issue of IOSH Magazine.
Click here to view this issue
Topics
News
Radiation