Four months in jail for roofing boss after worker fall 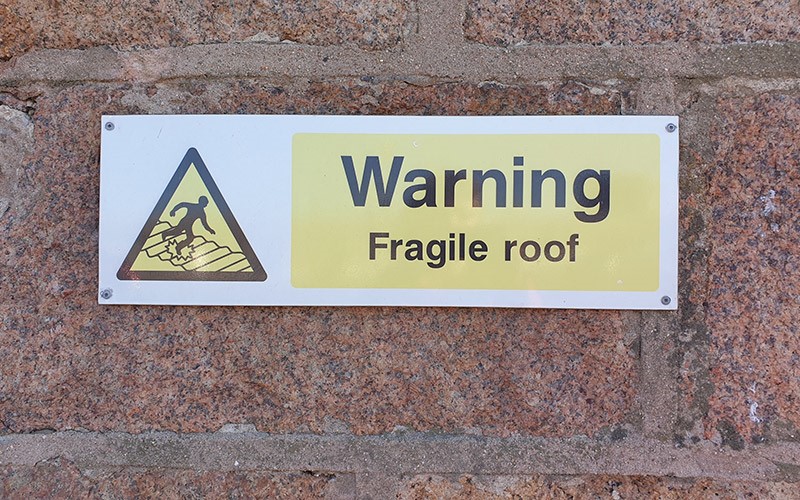 A roofing boss has received a custodial sentence after one of his workers fell through a farm outbuilding roof. IOSH Magazine spoke to Health and Safety Executive (HSE) inspector Michael Griffiths about what happened.

On 7 July 2022, Redditch Magistrates Court sentenced Geoff Whitehouse, trading as Midland Roofing, to four months in prison after pleading guilty to breaches under section 1(1) of the Employers Liability (Compulsory Insurance) Act 1969 and regulation 4(1) of the Work at Height Regulations 2005 (as amended). The case came about after a labourer working for Mr Whitehouse fell through a farm outbuilding roof onto a concrete floor, sustaining life-changing injuries.

‘Midland Roofing is effectively a sole trader: Mr Geoffrey Whitehouse. Mr Whitehouse has quite a lot of experience doing domestic roofs and, from what we could see during our investigation, he has done those well from a health and safety point of view,’ Michael said.

‘He was invited to go and price for a job which was more industrial, although it was in some respects a domestic job: replacing quite large fibreglass and plastic skylights on a farm outbuilding, however it wasn’t a working farm. The outbuilding was a single-storey building, about 3 m high, with a pitched asbestos cement roof that was very lightly supported inside. Essentially, it was an industrial-standard of roof – far less solidly built that a domestic roof.

‘Mr Whitehouse decided that he could do the job with the two men who worked for him, working from on top of the roof using the equipment that he had, which was an extension ladder and a cat ladder that hooks over the ridge of the roof. On 11 August 2021, they set up the extension ladder then put the roof ladder on, and then Mr Whitehouse gave the two men quite specific instructions to stay on the cat ladder while he went off to the builder’s merchants to fetch some new skylight material.’

The fact that Mr Whitehouse decided the work could be done from on top of the roof is the first key factor in this accident.

‘HSE guidance for fragile roof work basically leads you towards just not going on the roof. Virtually everything you can do on top of the roof you can also do from underneath using a tower scaffold. In this case, the skylights were bolted through the roof, but the bolts were probably corroded and the advice would have been to crop them off and knock the skylights out from underneath. The planning part of this job hadn’t taken any of that into account – Mr Whitehouse hadn’t looked at the guidance and decided to do most of the job from above,’ Michael said.

‘As could have been predicted, having two guys on one cat ladder – which would have to be progressively moved around the roof from skylight to skylight – was a bad idea that wasn’t going to be particularly convenient in terms of getting the job done. While Mr Whitehouse was gone, one of the guys came off the ladder to cut out a skylight – he thought that walking on the bolts where the asbestos sheets were bolted to the purlins underneath would offer enough support. Walking the bolts is not a safe thing to do and in this case the structure underneath wasn’t strong enough.

‘This man, who was around 40 at the time, went down the roof to get some bits out of the gutter. Then he sat down on the roof, immediately under where they had just removed a skylight. Where he sat, the panel was held by two sets of bolts – and this proves that walking the bolts isn’t safe – because the whole panel collapsed through as he sat down. He dropped head-first 3.5 m, hitting a piece of woodworking equipment underneath before then landing on the concrete floor.’

‘The man suffered significant injuries. He now has a titanium plate in his head, various neurological problems – memory loss, coordination problems – and he also had other physical damage, such as a broken collarbone and a broken rib. These are potentially life-changing injuries. He may never go back to work, he can’t drive, and he has had to move back in with his mum and dad to be cared for, which is a significant problem because he was previously one of the principal carers for his dad,’ Michael said.

‘Adding to the problems, we discovered that Midland Roofing didn’t have employer’s liability compulsory insurance [ELCI], so the injured man is struggling to get any compensation for his injuries.

‘Even though Mr Whitehouse used them on jobs, both workers were self-employed for tax reasons. However, under health and safety law, Mr Whitehouse became the employer because these people were working under a contract of service for him, so he was telling them what to do. Therefore, Mr Whitehouse as Midland Roofing took on all the duties of the employer under health and safety law, including the requirement to have employer’s liability compulsory insurance. This became a key point in the court case.’

The investigation and prosecution

‘Midland Roofing was prosecuted by HSE for not having ELCI, although that didn’t receive a separate fine as part of the sentence. There could also have been a variety of charges under work at height regulations but, when we investigated it, the key thing that Mr Whitehouse hadn’t done correctly was that he hadn’t planned the work properly,’ Michael said.

‘He should have planned it so that a lot of the work was done from underneath. During the planning he could have also included mitigation measures, such as fitting netting or a crash deck inside the building to catch anybody if they did fall through the roof. He didn’t do that, so, once somebody had fallen through the roof, they were doomed to a 3 m fall and landing on either bits of woodworking equipment or the concrete floor.

‘However, after the incident, Mr Whitehouse did go to get training so that he is better equipped to plan these sorts of jobs, and he has decided not to work on industrial roofs in future. He has done everything that we asked him to do to avoid the accident happening again. He also pleaded guilty at the first opportunity, and he hadn’t deliberately cut corners to make money – he was just out of his depth on this job. All that was taken into account as mitigation by the judge.’

Redditch Magistrates’ Court sentenced Mr Whitehouse to an immediate custodial sentence of four months, of which he’ll serve two and be on licence for the second half of the sentence.

‘The sentencing guidelines changed in February 2016 – prior to that you had to breach a prohibition notice to be sent to prison. What’s happened now is that almost all health and safety offences potentially have a custodial sentence attached to them, where individuals are prosecuted. It’s certainly worth IOSH members looking at the sentencing guidelines so they understand if they do get prosecuted for an incident, what factors could make the sentence far, far worse.

‘In this particular case, the important page is page 17 of the sentencing guidelines, which is relevant to individuals. This offence was deemed by the district judge to be medium culpability – harm category 1. So, the starting point for sentencing was six months in prison, with the range being from a band F fine or high-level community order up to one year in prison. The judge pitched the sentence below the starting point but not at the very bottom of the range.

‘I don’t often see businesses in the construction industry that regularly have workers but which are still a sole trader; most businesses that get big enough to employ other people go on to become limited companies. If Mr Whitehouse had been operating Midland Roofing as a limited company, then the sentencing guidelines on page eight would have been applied, with a starting point of £100,000 fine and a range of £60,000 to £160,000.’

Aside from understanding the sentencing guidelines, Michael said there are two key messages arising from this case.

‘Plan the work very carefully so you don’t have to go on the roof, and if you do have to go above, preferably do it from a cherry-picker. The absolute last resort should be a cat ladder, because the instinct if you do any great amount of work from a cat ladder is to get off the cat ladder, and that’s very dangerous.

‘The second message this case brings up, if you are a small company and you have self-employed people working for you, is that you may well need to have employer’s liability compulsory insurance. It depends on how the contract is worded between you and the people who work for you. If you have control of them – if you are telling them what to do – you are employing them as far as health and safety law is concerned. And if you are employing them in health and safety law, you need employer’s liability compulsory insurance.

‘In this case, I was surprised that Mr Whitehouse wasn’t insured. And then, when I understood the injuries that occurred to the man who went through the roof, I became more horrified that he wasn’t insured because this man isn’t going to get the significant compensation he now needs to deal with his life-changing injuries.’