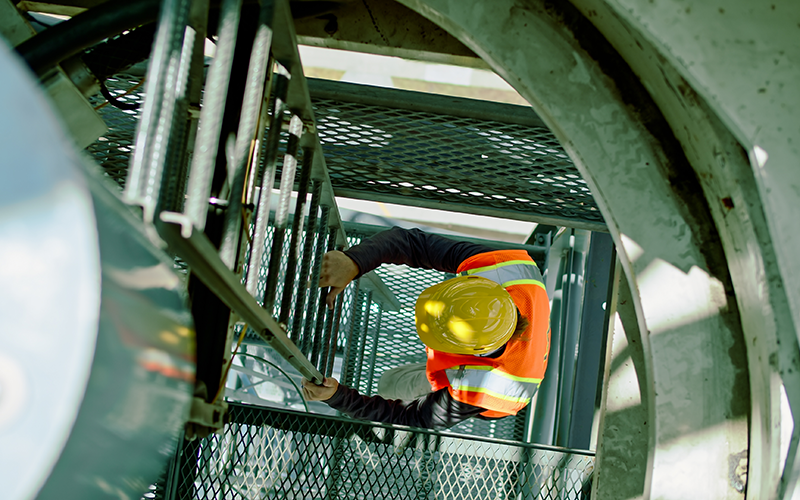 A product surveillance study of telescopic leaning ladders sold online and in-store has found that 80% of the work at height equipment tested failed the required safety tests designed to keep users safe.

The Ladder Association report, which has been produced in partnership with the East of England Trading Standards Association (EETSA) and Suffolk Trading Standards Imports Team, also reveals that more than half of the failed ladders were certified and sold as ‘compliant’ to standards such as CE marking.

The testing of 17 telescopic leaning ladders supports the Ladder Association’s ‘Step Up to Safe Ladders’ campaign, which aims to raise awareness of the safety risks associated with poor-quality telescopic ladders and to stop their sale.

A member of the Access Industry Forum, the Ladder Association believes that all telescopic ladders in the UK are imported, and although many appear to be ‘fit for purpose’, some ‘fall well below basic safety requirements’.

One of the study’s main objectives was to investigate whether ‘substandard ladders are contaminating the UK’s supply chain, with little or no checks being made by the importer’.

Although trading standards has powers to take enforcement action against businesses in the UK when safety concerns are raised, they are powerless to act against sellers who are based overseas.

Importers have a legal responsibility to only place safe products on the market, the Ladder Association notes. However, some importers are ‘misleading consumers and ignoring their legal requirements by showing a complete disregard for product and consumer safety’.

The research focused on testing telescopic leaning ladders, which have become increasingly popular because they only require a small storage space compared to other ladders; they are lightweight and compact; and their size and working height can be adjusted.

According to the Telescopic Ladder Surveillance Survey, the ladder is extended from its closed position by lifting rung sections, a sub-assembly of a rung and two stile tubes joined with rung brackets. After that, a locking mechanism pins then connects the rung sections, holding the upper rung section in place. The advantage of the equipment is that each section can be extended until the user reaches the length they require.

As the Ladder Association notes, telescopic leaning ladders should be manufactured so they comply with EN 131-6, which was last revised in April 2019 and is known in the UK as BS EN 131 Part 6: 2019.

The survey tested 17 ladders against the standard’s requirements at the UK-based test laboratory and certification body’s Test & Research Centre. All of the ladders were obtained anonymously from a number of sources, according to the researchers.

The EETSA selected eight ladders from distributors and manufacturers that were active in their enforcement area enabling them to follow up should the tests highlight any issues.

Suffolk Trading Standards Imports Team detained three ladders at the Port of Felixstowe and supplied them for the test while the Ladder Association picked the remaining six ladders based on feedback from a member survey that provided details on ladders suspected to be substandard.

‘The feedback suggested that there was more of a concern regarding the online platforms, compared to UK companies with a physical presence,’ the report notes.

‘This would balance the trading standards products purchased in gauging any potential issues in the market. A steering committee then narrowed down the list to six samples, which were purchased from online shopping platforms and wholesale retailers’.

According to the researchers, almost all of the 17 ladders tested stated that they conformed to ‘EN 131-6 in one form or another, either on the sales information, product literature or as a label on the product itself’.

Two of the Ladder Association’s six samples were purchased so that the Test & Research Centre could test the ladders in their entirety, ‘in the event that the samples were subject to complete product failure in earlier tests’.

The researchers found that some samples could not be further tested because the ladder demonstrated a structural failure in an earlier test.

The study revealed that only three of the 17 ladders tested fully passed all of the limited scope requirements and conformed to EN 131-6.

‘In contrast, and far more worrying, is the significant number of ladders tested that have inherent design features which make the product incompatible with the requirements of the standard,’ the report notes.

To give an example, one of the samples identified a run pitch of almost 400mm, which the Ladder Association says ‘increases the risk of a fall from height due to the excessive distance between the rungs’.

The Ladder Association adds that some ladders produced with the rung locking mechanism on the face of the rung, allow the product to be set up with inconsistent rung spacing.

‘Similar to rung pitch, this increases the risk of fall from height, as a user may position the rungs incorrectly and lose their footing during use,’ the report says.

‘The base width of leaning ladders over 3m in length was increased some years ago as part of the revision to EN 131-1 to improve leaning ladder safety and make ladders more stable. Ladders sampled here were clearly designed without this requirement being implemented, compromising stability and user safety.’

The survey also reveals that by looking at the design of the 12 ladders that failed some or all of the dimensional and design requirements, the manufacturer had made no effort to conform to EN 131.

The Ladder Association says the findings from the physical tests were even more worrying. Incredibly, 11 ladders failed the strength test before the test load could be applied. In practice, this means that the ladder could buckle beneath the user, causing a fall from height.

It also points to the failures of samples against the unlocked rung strength test. Because telescopic ladders rely on the locking catches to hold the users’ weight, the Ladder Association says ‘it is entirely foreseeable that a locking mechanism could be overlooked, hence why this test is included in the standard.

‘Of the 11 ladders which survived long enough to undertake this test, five failed. This could easily lead to a fall from height for a user with potentially serious consequences and risk of injury.’

As the Ladder Association notes, falls from height are the leading cause of fatal accidents in UK workplaces, with 35 deaths reported in 2020/21.

This data, however, does not provide any indication into what equipment was being used at the time of the accident nor the cause of the fall.

The Telescopic Ladder Surveillance Survey includes a call for action, which outlines recommendations aimed at removing the supply of substandard telescopic ladders.

Peter Bennett, Executive Director of the Ladder Association, told IOSH Magazine that everyone has a part to play to make sure people who use ladders are safe.

‘Suppliers, distributors and importers need to step up, as they have a fundamental part to play in only sourcing safe, compliant products. Retailers, online marketplaces and social media selling platforms need to take greater responsibility for ensuring that the products offered for sale in their stores or on their sites are safe, and there should be a requirement to remove any unsafe products they become aware of.’

Bennett added the Ladder Association was also calling for increased awareness of the issues with enforcement agencies ‘to stop these unsafe products at point of entry – progress is being made, but more can be done to gather further intelligence to stop these products entering the UK supply chain.

‘Finally, we are calling on the UK government to add the telescopic ladder standard, EN 131-6, to their designated standards list. This will help manufacturers prove compliance and make it clearer for regulators and enforcement bodies to take action when needed.’