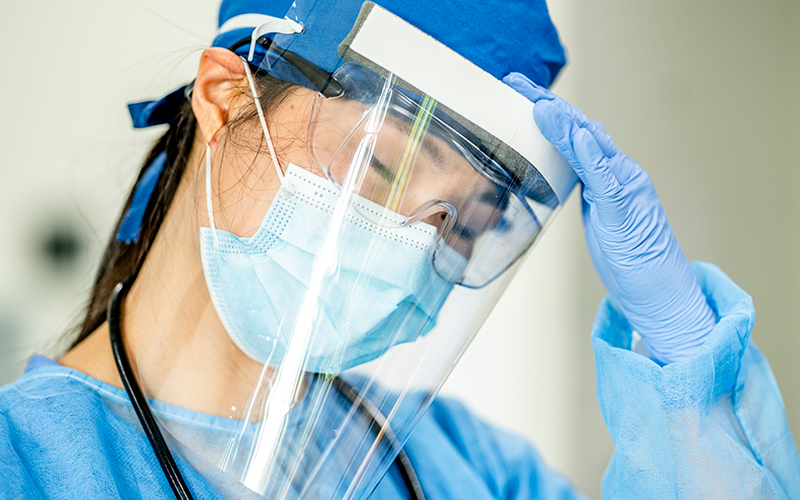 A judge has warned that employers must have good reasons for departing from the recommendations of an occupational health report.

A nurse who suffered from migraines she says were made worse by wearing PPE during the pandemic has won her case for unfair dismissal, after a tribunal decided her employer had failed to follow occupational health advice or make reasonable adjustments for her.

On 29 May 2020, Ms C McKenzie, a deputy sister, was dismissed by the University Hospitals of Leicester NHS Trust because of what the head of nursing described as 'unacceptable' sickness absence levels. McKenzie suffered from migraines and anxiety and depression, which Employment Judge Ahmed noted are acknowledged to be disabilities for the purposes of the Employment Act 2010. Caring responsibilities for her grandmother exacerbated her symptoms.

The Leicester tribunal heard that Ms McKenzie suffered regular episodes of migraine, resulting in absences of one or two days at a time. Over the course of her employment, which began in 2010, she had more than 300 days off sick – ‘the vast majority…related to her disabilities’ – of which 85 days were in the 12 months leading up to her dismissal. This level of absence was eight times higher than her employer’s stated absence management target.

The majority of her absences over 10 years were due to stress, anxiety, depression or migraines; ‘in other words, all disability-related’

After a period of long-term absence from September 2018 until April 2019, which was due to depression and anxiety, Ms McKenzie received a final written warning along with attendance targets for the next 24 months. Further periods of absence followed, as a result of depression (December 2019 to March 2020), sinusitis in March 2020 (which may have been Covid, as Ms McKenzie subsequently had a positive antibody test), and a migraine on 25 April 2020.

Ms McKenzie told the tribunal that the PPE she had to wear – including a facemask for 12 hour-shifts – affected the frequency of her headaches. The judge agreed that the ‘pressurised environment at the time’ offered limited opportunities to hydrate.

On 22 May, Ms McKenzie attended a hearing with her employer after which she was dismissed. Her appeal against her dismissal was rejected. She made a claim for unfair dismissal on the basis of disability discrimination and the failure to make reasonable adjustments.

Finding in her favour, Judge Ahmed argued that it is ‘quite clear’ that Ms McKenzie’s written warnings and breaches of absence targets were ‘principally because of disability-related absences’. The majority of her absences over 10 years were due to stress, anxiety, depression or migraines; ‘in other words, all disability-related’. She was dismissed due to absences resulting from her disabilities, which is ‘a breach of section 15(1) of the Employment Act 2010 unless it can be justified’.

Judge Ahmed acknowledges the need to maintain adequate staffing levels to ensure good patient care, and describes Ms Mckenzie’s absences as ‘lengthy and frequent’. But he concludes that her dismissal was not proportionate: the outlook for her mental health was optimistic, and she had successfully completed a phased return to work at the time of her dismissal.

Significantly, an OH report had recommended a three-month return period (after her final long-term absence) followed by redeployment if that was unsuccessful. ‘In dismissing the Claimant,’ the judge concluded, ‘the Respondent [her employer] acted contrary to the recommendation of the occupational health report’.

Ms McKenzie argued that her disability-related absences should have been excluded – as a ‘reasonable adjustment’ – when it came to absence monitoring and disciplinary action, and the judge agreed it would have been a reasonable step to discount her migraine absences ‘in their entirety’.

‘The purpose of reasonable adjustments is to ensure a level playing field,’ Judge Ahmed pointed out, ‘but that cannot be achieved if all of the absences allowed are taken up with disability-related matters, leaving no room for any other legitimate absence’.

He adds that in light of Ms Mckenzie’s positive Covid antibody test following her absence for sinusitis, that particular absence should also have been discounted.

Judge Ahmed concluded: ‘Employers are of course not bound by the recommendations of an occupational health report, but a reasonable employer is obliged to provide some justification for departing from its recommendations. No justification has been put forward in this case.’

Following the decision, Clare Teeney, chief people officer at University Hospitals of Leicester NHS Trust, said the trust would ‘use the findings of the tribunal to improve our processes and to consider how we can better support our colleagues in the future’.

Compensation will be decided at a later hearing.

The full text of the tribunal judgment is available here.