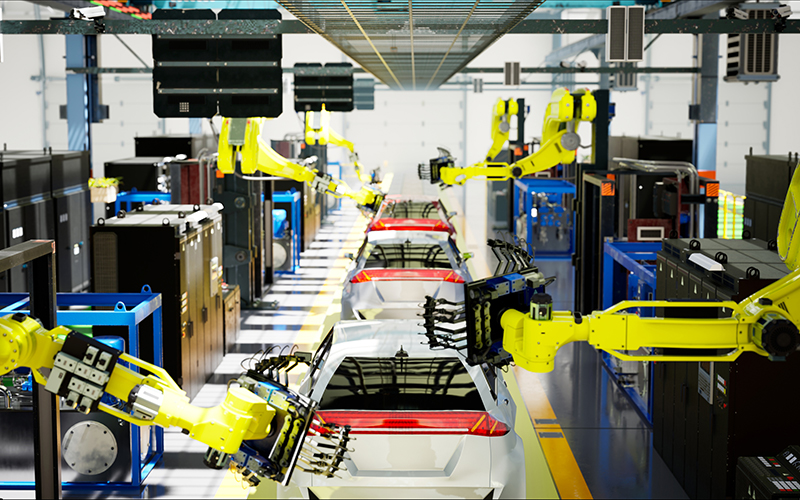 The switch to electric vehicles is changing the risk landscape for car manufacturers. We found out how G4S is protecting assembly line workers and its first responders.

G4S, the London-based global security company, has been working with the UK operations of a major European car manufacturer to put measures in place to protect workers from the risks posed by the lithium batteries that power electric cars.

Lithium batteries, explains Steve White, UK national account director for G4S Secure Solutions, are extremely advanced but highly flammable in the event of a fault or misuse. A problem with the battery components can result in what’s known as 'thermal runaway': a rapid and extreme rise in temperature passing between battery cells, which can lead to fire or even an explosion.

Steve became involved in the EV manufacturer project when the initial risk assessment for the assembly line was rejected.

In December 2021 alone, nearly a quarter of all cars bought in the UK were electric (Society of Motoring Manufacturers and Traders). With demand rising and lengthy waiting times for new orders, G4S wanted to make sure its control measures were gold standard – to protect both its first responders on site and the in-house teams working on and around the assembly line.

Acknowledging that he was “not an authority” on lithium batteries, Steve and the G4S safety incident response team spent two years researching the risks and the most appropriate control measures.

'I took a keen interest, because we were very aware of what we needed to learn,” he recalls. “To make sure we were getting the very best insight, we drew on the expertise of the Hampshire Fire and Rescue Service (FRS), bringing in their risk assessor to help inform our decisions on how we could mitigate the risks.'

Steve is clear that G4S isn’t there to replicate the role of the fire and rescue service or any other emergency service; rather, G4S personnel are first responders when it comes to fire, medical, environmental needs and security.

With the help of Rob Porter, an FRS trainer, and working with the EV manufacturer’s on-site safety team, Steve and the G4S safety incident response team made some fundamental changes to the initial risk assessment, and the G4S management team signed-off the revised assessment – although, in common with much else over the past two years, the process didn’t escape Covid disruption.

'Because of Covid restrictions, we weren’t all able to meet together on site to see everything first hand,' explains Steve, 'so the customer had someone do a walk-around with a bodycam!'

Use it or lose it

The outcome of the research and the new risk assessment was a “triple-mitigation response” plan.

The first element of the plan is PPE. The PPE already in use wasn’t fit for purpose, Steve explains, as it was far too heavy.

'The team can’t walk around in full fire kit all day because they’re doing other things, so for first responders we specified flame-retardant blue coveralls, which are really lightweight. For similar reasons, breathing apparatus sets wouldn’t be practical, so we provide smoke hoods fitted with P3 filters to cope with the gases that would be released in a thermal runaway.'

The second element of mitigation is fire blankets to throw over a battery to suffocate a fire.

'Of course, fire blankets aren’t new,' says Steve, 'but we found a company in Ireland that is able to supply fire blankets capable of managing thermal runaway. They’re also multiple-use blankets: in theory, if we had to use one, rather than throwing it away we could use it another 49 times. But of course we’re hoping never to have to use one at all!'

The third element of the mitigation response plan is training. G4S developed safety briefings and training so all those working in the vicinity know what to do in in the event of a thermal runaway.

The training has four strands: security training, which is accredited by the Security Industry Authority (SIA); fire response training, where the safety incident response team learns how to manage a fire during its first 15 minutes; and finally environmental incident training and medical training, which enable the response team to handle the secondary impacts of a thermal runaway, such as injuries and structural damage to the building.

For reassurance that the measures devised are sound and appropriate, Steve invited external scrutiny from 999South Group, a member of the British Fire Services Association, who were able to confirm that the mitigations meet best practice: based on their experience from ex-local authority and current civil aviation firefighting, 999South Group confirmed the PPE is highly appropriate. And while he hopes it’s never tested in a real emergency, the team does get a chance to test it in live fire training.

'I don’t want have-a-go heroes: in an incident, I expect the team to do dynamic risk assessments and to escalate when they need to.'